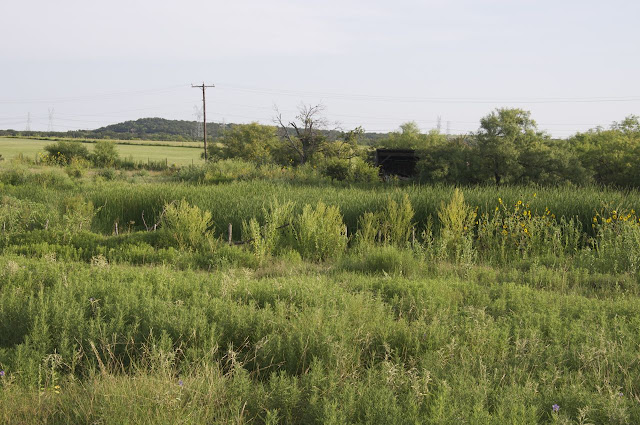 To give a little context, this is how Rio's corral lot (foreground) and pasture (behind the fence where the row of sunflowers are) looks after all the spring rains.  The native grasses over in the pasture in that section are as tall as Rio.  Dad always kept the pasture and lot mowed, using his little Ford tractor and his heavy duty mower.  He has not been able to mow since 2011.  With all the drought around here, it did not really matter as nothing grew this much.  Rio and Jenny kept it grazed down until summer hit, and then it would all wither and die.  Due to the extremely heavy spring rains this year, it has turned into something resembling the Great Plains grasses before the encroachment of farmers and ranchers on the territory. 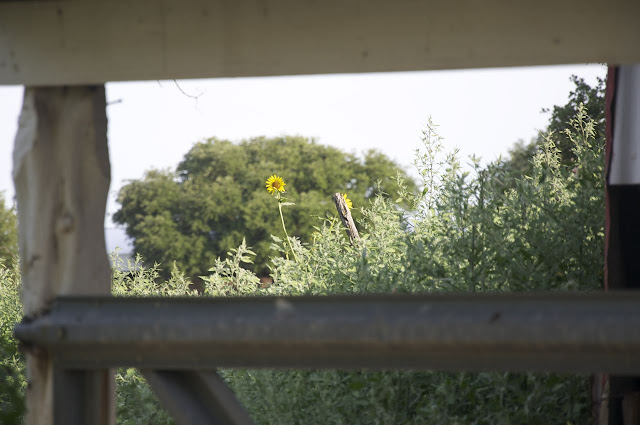 The view outside Rio's stall--he has a trail from the pasture into his gate into the stall.  It reminds me of my childhood and riding in the fields and pastures at my grandparents' house, where Patsy had all her little trails worn--to the tank, the back porch where she would get unsaddled, the barn where she would be fed and stalled when she was not in the pastures. 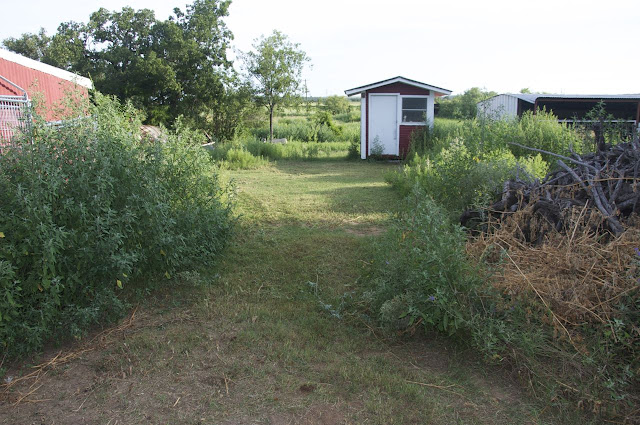 I went out late yesterday afternoon after feeding Rio and used the push mower to mow the knee high grass and shoulder high weeds away from his feed bin, water and the fence.  Sis has used the weedeater a time or two, and Bert went out and clipped them all away from the trough and feed bin once, but it needed serious intervention.   I mowed all the way to the gate going to the pasture, and to the hay storage barn and the hay barn/Rio's barn.  (Yes, this horse has 3 barns.  One in the pasture, the barn where he eats his hay and his little barn which is slightly larger than a stall, but he likes it because he can look out the "window" and watch for me. :) 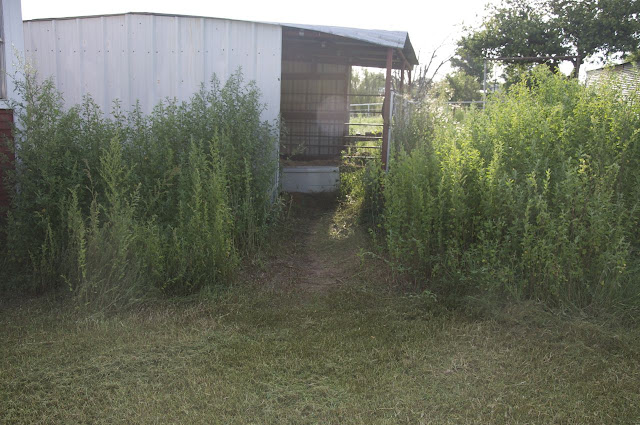 The grass was not too difficult, but mowing these weeds was a bear.  I worked to just get the trail cleared for yesterday and will work on the rest of it a little at a time throughout the week. 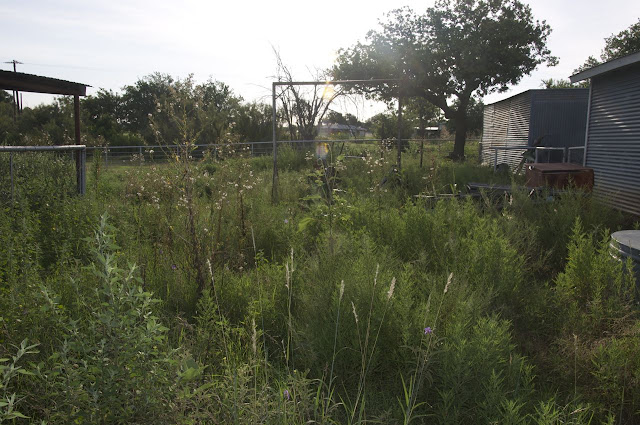 This is what awaits me next:  There is a trail from the gate over between the shop and the garage that runs over to the feed area and the hay barns.  It is not visible, because Rio has not seen the necessity of using it at the moment.  We can go in and out of the feed/water area using the small gate, but I still want to clear this area away from the path a bit in the event anyone needs to traverse it. 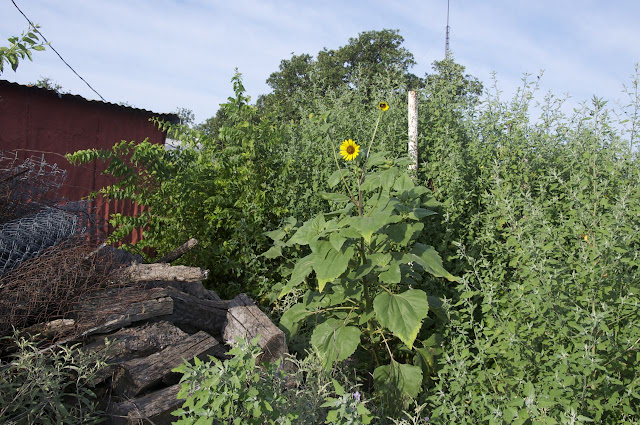 Behind Rio's stall, the weeds are over Rio's head, let alone mine.  I mowed all the grass and the shorter weeds from the barn to the pasture gate. 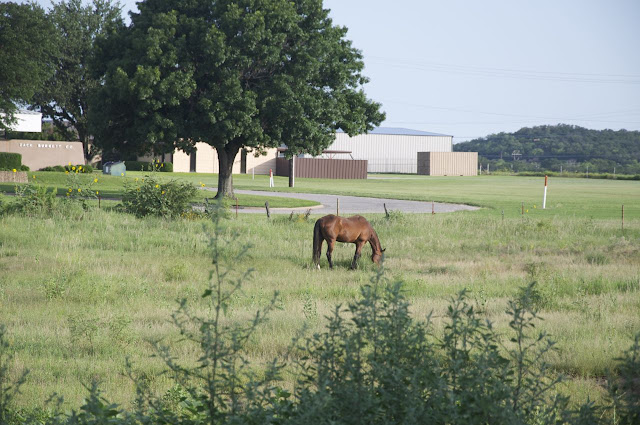 This morning, I went out to see how bad the pasture was--thankfully, all the grazing area is just grass and adequate.  Only along the creekbed is vastly overgrown, so I will work on that in due time.  But for now, my boy is in good shape, his water trough has been cleaned and re-filled, and I have moved on to the next chore: scraping, sanding, and repainting the doorsill on the door to the East deck.

I don't exactly understand why, but doing this kind of physical labor is like therapy to me.  I feel a sense of accomplishment and satisfaction, and it simply needs doing so I do it.  It brings me pleasure, no matter how hot, sweaty, or tired I get.  I feel connected.
Posted by Suzassippi at 1:15 PM

I feel the same way. There's nothing quite as deep down make you feel good as tackling and completing an outside project. I hope you were wearing your rubber boots for this project. Lol.

It is amazing what a change rain makes! I also feel satisfaction from tasks that require a little physical input and/or output. I like to think of it as "sweat equity" when I'm working on the house or yard! I smiled as soon as I saw the title of the post - can't wait to read about Rio!

Whoa, it was a busy day women! I tried to answer you with the email reply, Lana, but it did not work. I was avowing not only had on the rubber boots, but coated myself in Deep Woods Off. It was a bit of a rough day today, but has finally calmed down. I am hoping for a calmer day tomorrow, but my sister informed me it won't get any better. :)