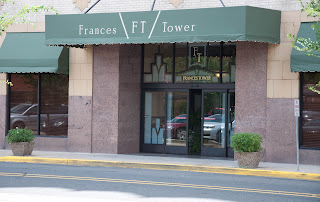 An accidental wrong turn in Monroe led to a glimpse of this stunning Art Deco Hotel Frances.  Originally constructed 1931-32 by Wyatt C. Hedrick & Co (renamed after the Sanguinet, Staats, & Hedrick company that operated from 1922-1926 liquidated), the 179 foot tall, eleven-story building is made of concrete (Emporis). 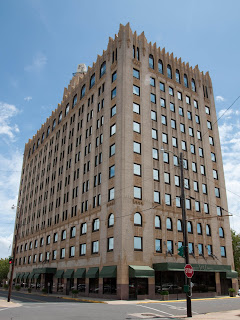 Unfortunately, the near-by buildings made it impossible to get a full, undistorted photograph of the building, but I could not pass it up regardless.  Monroe needed more hotel rooms, and it was the intent of the owner to compete with The Virginia, then the top meeting locale in town (Monroe Downtown Economic District). 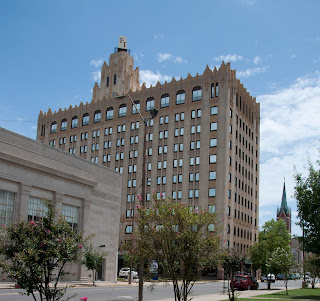 The top floor was the Cherokee Ballroom, and it would "...replace the rooftop ballroom of The Virginia as the number one social destination" of Monroe (Monroe Downtown Economic District).  The basement retains the street-entry--"a sign of the speakeasy days" and currently houses a bistro. 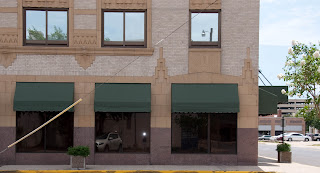 The building was purchased by the Monroe Housing Authority in the 1970s and converted to use as apartments for elderly.  In April 2012, a $3 million/2-year renovation was completed which included restoration of the travertine and marble stone original to the building, and architectural details including flooring inserts, etched glass entry doors, restored beacon on the penthouse, and a circa 1929 lobby and mezzanine (Monroe Housing Authority, 2012). 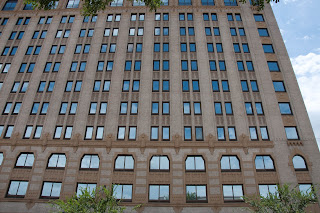 In its heyday as a hotel, it was advertised at the finest in the south, and boasted "250 air-cooled rooms and four air-conditioned dining rooms" (circa 1950s Hotel Frances post card). 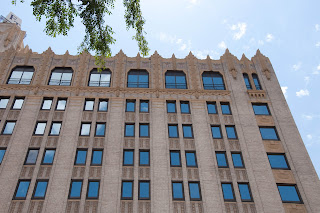 The Cherokee Terrace seated 650 persons, and Delta Air Lines maintained an office in the lobby. 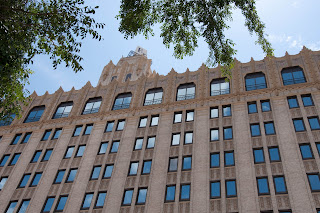 The hotel was "crowned by a 51 foot, three-tiered penthouse" (Emporis). 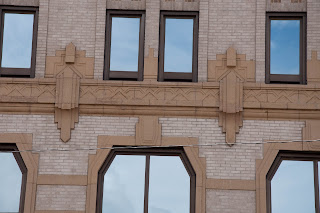 It prominently features Art Deco details on the exterior and interior.  Although Monroe had managed to weather some of the effects of the depression, a second flood in 1932 following the flood of 1927 took an additional toll on Monroe, already devastated by the cotton decline.
Posted by Suzassippi at 10:15 AM

ca vienne, Suzassippi, I was born in Monroe and back in the day, all the wonderful old hotels had penthouses on top of them all. There is a pink penthouse on top of the Penn Hotel, it belonged to State Representative Shady Wall( His real name was Shady!) He had the penthouse built for his mistress in 1928 and his wife found out about it so she hid in the penthouse and shot the representative in the chest. That's soooo Louisiana.