Kudzu: The Gift that keeps on giving 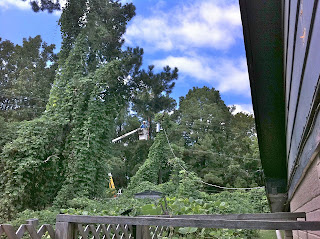 We have lost the battle of the kudzu.  In fact, we never really had a chance in the first place.  There is a sci-fi book I read years ago about a planet where there is constant war with the vegetation, and outside of the walls of the city it is a continual battle to make it safely through.  I think about that book every year when it gets impossible to maneuver much further than my back door. 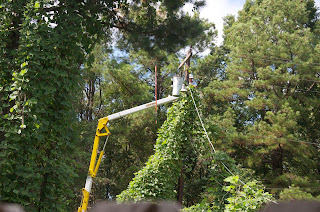 A year ago in August, I called the electric company about the kudzu on the transformer.  Even though we called three times, they never came to clear this.  A couple of weeks ago, we began experiencing outages, lights flickering, and the assortment of associated experiences of life here in the jungle when the electricity is not working.  We called again...and yet again.  There is something about live electric lines not functioning properly that makes me very anxious. 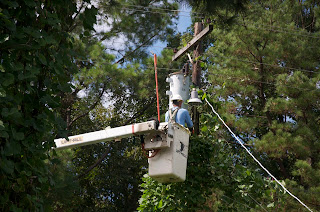 Here's a job I don't think I would want.  Even if the power is off (apparently, that orange pole turns off the power off from the line to the transformer), I don't think I would be very comfortable with this line of work.  After getting the kudzu off the transformer, he had to go on the roof and repair a service connector that had come loose, which he thought was causing the problem.  However, he noted that all of the system appeared to be original to when the house was built (sometime in the 60s?) and that they just might need to replace it.  There is always something to look forward to here.
Posted by Suzassippi at 8:21 AM

The current Kudzu of my life--recording music videos--has kept me away from blog reading so I did some catching up this morning. The photo of the Super Chicken guitar neck is great. A couple of the other posts reminded me to never buy a house that needs fixing up--I couldn't do it.

Have a great weekend--and now I need to get back to working on the videos.