Architect Frank P. Gates designed three buildings for the Ole Miss campus in 1929.  First in the series of posts is the Lamar law building, currently known as Farley Hall and home to the School of Journalism. 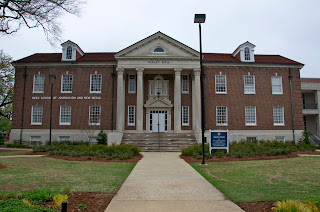 As the newly constructed law school in 1929, allowing the school to move from Ventress Hall, it contained an auditorium and courts, as well as classroom space.  It was also home to the Mississippi Law Journal. 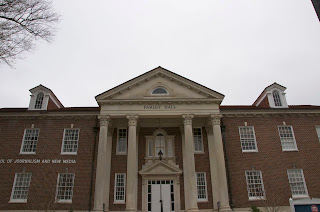 Note the dormers, the design of the columns and the window over the door:  We will look at these again in comparing another Gates building on campus. 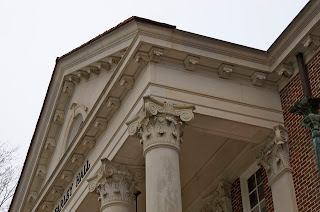 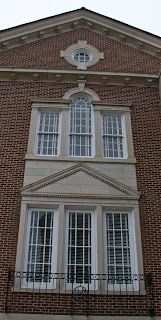 Also to be noted, the iron grill work present on this building will be replicated on a later building by Gates. 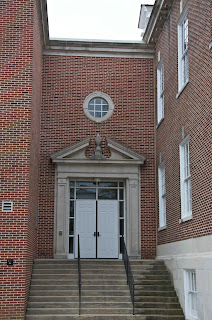 And, finally, the style of the arch over the door and the center finial will also show up in a similar fashion.

The Law School was housed in this building until 1978 when it moved into its new building: a tan concrete structure resembling a glass and concrete bunker, and matching nothing else on the campus--except maybe the glass and concrete bunker that is the student union building.  The law center moved to the new Khayat Law Building in January and the renovation of the old law center is pending.  It will be interesting to see what the building will look like when complete.  There are many speculations as to whether they will give it a facade more in keeping with the other buildings on campus, but that remains to be seen.
Posted by Suzassippi at 7:03 PM

Love this building--a shame the interior is gone gone gone. I'm really looking forward to your comparison posts for Gates!