University High School, on the Ole Miss Campus
University High School was a demonstration high school, built for the use by community, but for the purpose of training teachers.  Student teachers worked in the high school, which was built "across the railroad track" in order to be more accessible to the students.  It was actually on the edge of the campus at that time.
Faculty from the university also taught as well as supervised student teachers.  When the number of teachers needing training and placement exceeded the capacity of the UHS, students had to be sent to other schools.  From there, it was only a matter of time before Oxford built its own high school, Oxford High School, in its current location. 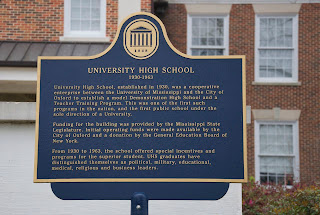 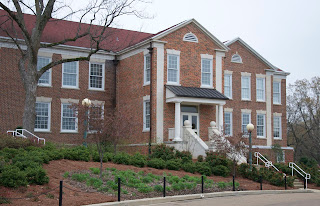 A one-story wing was added in the late 50s, but only a few years later, the school would no longer be needed, and would be used to house the School of Education until they relocated to Guyton Hall and the buildings were renovated for the music department. 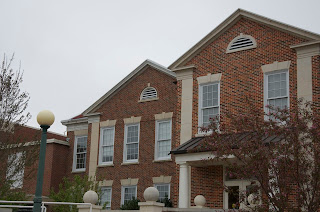 The original part of the building is to the left; the right side of the photograph is the addition of an entry way that was included in the renovation completed last year.  A new entry was added at each end of the building. 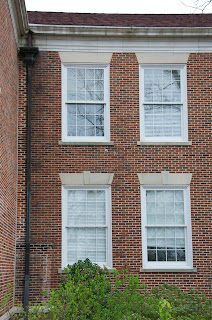 Posted by Suzassippi at 6:42 PM

I read completely through your blog and really enjoyed it. Keep up the good work and posting of pictures of the wonderful buildings you find.
Rex

Thanks, Rex. I appreciate that I believe we must be neighbors, what with you in Bodock and me in Lottabusha County. Stop by again when you are in the neighborhood, and I'll keep an eye out for you at the deer camp.