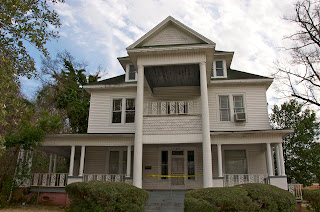 The Spain House in Tupelo was in the news frequently the last couple of years, due to the fact that it had been purchased by the Calvary Baptist Church and they wanted to demolish the historic structure.  (Links to news articles and more specific information is available over on the MissPres blog--just click on the blog to the right and type Spain House in the search box).  At least part of the reasons for demolition allegedly had to do with the need for repairs to the house that would be expensive, and the desire to use the property for other reasons.  As long as I was "in the neighborhood" yesterday, I thought I would finally  lay eyes on the property. 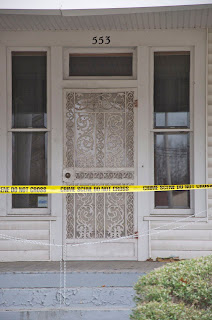 I don't know if this is actually where a crime has occurred, or it's just the tape the city had handy to reinforce the no trespassing sign, but I could not get closer than the sidewalk without fear of an intimate view of the Tupelo jail.  While I might be inclined to fudge in a rural area (where all I want is a picture) I am generally not one to bend the rules in a highly visible and populated urban location, so I kept my distance from the signs.

I wanted to see how much evidence there was of structural damage, and noted little on the exterior that was visible.  I do know that there are things that are not visible to the eye, but nonetheless, I did not notice anything glaring.  I must say, that there are worse areas on the house in which I currently live, and the repair of those is relatively easy and so far, inexpensive.  I do love the beautiful iron detail on older homes.  These architectural pieces have become a high-dollar criminal business in New Orleans these days as people loot damaged and unoccupied houses remaining from the effects of Hurricane Katrina. 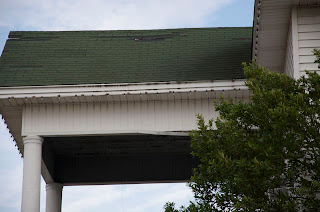 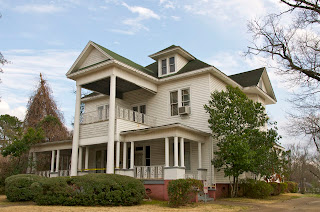 Still, the home seems quite beautiful and certainly one that does not appear to need to be demolished. 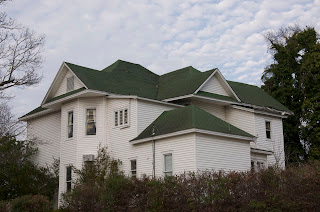 There was only one obviously visible area of damage in the rear of the house.  While I was unable to see inside, I would assume it would have had to have been a lot of damage to justify demolishing such a beautiful and regionally historical building.  The October 6, 2010 city council meeting minutes do say "there's a lot of damage" and that the church should be given the "green light" to demolish the house, and that further assumption of liability on the part of the city was unacceptable.  I have searched diligently and cannot seem to find an actual disposition, but it seems as if the city of Tupelo decided not to move ahead with plans to purchase and relocate the structure and that it is only a matter of time until this house will be a parking lot or another megachurch building. 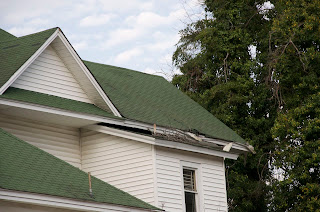 Maybe sometimes things do have a happy ending, and a group of people who want to save something worth saving can sometimes prevail over money and power.  At least some of the time, I'd like to think that happens.  It does not seem to be the case this time.
Posted by Suzassippi at 6:33 PM

I love the front of the Spain House. The back is a little less fascinating, but I bet roaming around inside the house would be quite a treat.

It's too bad that the owners mostly have a need for the property and not the building.

I know; I'd love to move it to my little hillside here and take it off their hands.

The Spain house really only has cosmetic damage to the structure, besides any foundational issues I am not aware of. I was in the house about a year ago with a group of people and to say is stunning is an understatement. The walls, flooring, and achitectural elements were all in great condition. It is apparent the home has been empty for a long period and that was used as some sort of rental property at some point. It is still in repairable condition and should be preserved. We have inquired about buying it but were told that the church is set on demolishing the structure to serve there expansion efforts. As of the writing date of this correspondance I believe there is another gentleman who is actively negotiating with the church to purchase the house and restore it.
Michael
imareb@hotmail.com