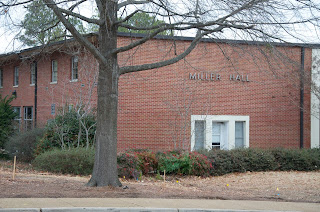 Even though this building is right behind my office, the first I heard of its proposed demolition was on the MissPres news round-up last week.  There's not much news to be had at the moment--either about its history, or the planned demolition and replacement.  The building's dedication program was held 1959 according to the University archives, and the building opened in 1960 to house the football players.
The building is now used for offices and administration of the housing program accorded to the Daily Mississippian (02/02/11).  "With the building being 50 years old, it is past its useful life," according to Ian Banner, the director of the Department of Facilities Planning.  Banner cites the building's central location on campus as the reason for it being chosen for the most appropriate site on campus for the proposed new 720-student residential building proposed to take its place.  The enrollment at Ole Miss has skyrocketed in the past year, and predicted to continue to grow--and we are indeed out of housing space as well as classroom space. 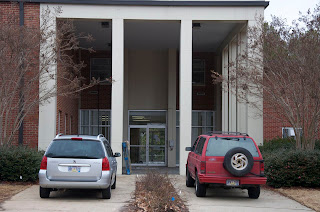 Approval to proceed with plans for demolition is pending with the Mississippi Department of Archives and History and Institutions of Higher Learning.  Some type of work is occurring in the building at the moment, as there were workers in the building today, and there is equipment and what appears to be debris outside the front entry, along with the ubiquitous blue porta-potties that appear all over campus these days.
I must say that there is nothing particularly impressive about the building from my eye, other than I do like the large portico at the entry and the double expanse of glass on both sides of the lobby.  An identical wall/door is directly opposite this front entry. 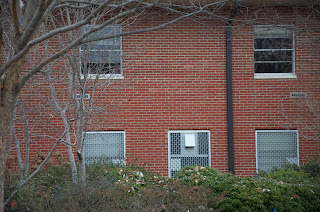 I'm not sure at what point the grills on the lower windows were installed--if it was after the building was shifted to offices, or if they have always been there.  Perhaps to keep those rowdy and adventure-loving football players from the 60s in their rooms at night?  Wright Thompson's essay on Ghosts of Mississippi refers to Miller Hall and the night of the 1962 riot on campus.

Today, I sat across the table from the parents of an African American student in one of my classes during the induction ceremony for the Phi Alpha Social Work Honor Society.  The father commented that the campus had changed much since the 70s.  I think he was referring to more than just how it looks.
Posted by Suzassippi at 6:39 PM

Since my mother is from Belgium and would take us back to visit her parents every other summer, I had to laugh at the quote, "With the building being 50 years old, it is past its useful life".

Over there it seemed like people referred to a 50 year old building as "that new place down the street".

I know--I was pretty amazed at that statement, too. Especially since the majority of the buildings on campus are dated from the 1800s or first few decades of the 1900s--including my building!