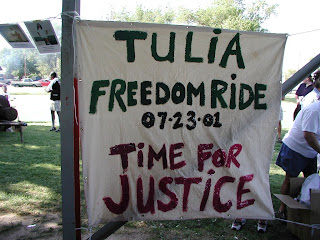 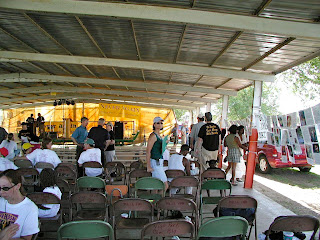 Last Friday at work, talk turned to someone in Mississippi who had recently been exonerated after serving a lengthy period of time in prison for a crime he did not commit.  In fact, there have been several cases in the news about that lately, in other states as well as in Mississippi, about wrongful imprisonment due to shoddy forensic work--and more often than one would want to believe--false testimony by witnesses.  It reminded me of the Tulia, Texas "drug sting" of 1999 and I was sharing the story with my colleagues.
I first learned of the sordid events in 2001, when I traveled from Abilene to Tulia to attend the Tulia Freedom Ride Time for Justice community rally.  One morning in 1999, 47 people--almost all of them black--were arrested and accused of dealing cocaine (Blakeslee, 2005).  It resulted in the incarceration of one out of every five black adults in Tulia, all based on the uncorroborated testimony of Tom Coleman, an undercover officer of a drug task force who would go on to be named "Officer of the Year" for this crime--for what Tom Coleman did, was indeed a crime, and for which Coleman was convicted of perjury--a felony offense that ended his "law" career and sentenced him to ten years probation.  That hardly seems a fitting punishment for someone who intentionally and deliberately facilitated the arrest and conviction of innocent people. 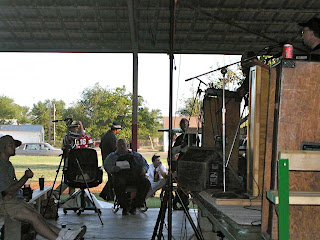 The fact that a number of the defendants had such air-tight alibis as a punched time card showing presence at work and testimony of a boss to corroborate that presence, coupled with a lack of any evidence other than the testimony of Coleman, carried no weight with the prosecuting district attorney or the jury, and they were convicted and lengthy sentences were handed down.  It all came to light when locals began questioning how it was possible that a bunch of poor people, living in poor housing and no indication of an extravagant lifestyle could possibly be dealing powdered cocaine to a community of poor people in whom the drug of choice was either marijuana or crack. 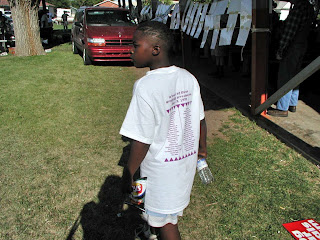 It would take years--during which innocent people remained in prison--before the case would be cleared and the imprisoned exonerated.  Investigative journalism and community organizing kept it on the front burner, and resulted in attorney Vanita Gupta's involvement after she saw a documentary shown at an NAACP event.

Shortly after that conversation, my colleagues and I headed over to the newly completed law building at the university for lunch in the new Bistro 1878.  Afterwards, we took a quick look at the building.  Rounding one corner, we saw a sign that proclaimed the Mississippi Innocence Project.  You can visit the Mississippi Innocence Project for more information about the work being done in Mississippi.  You can read Blakelee's Tulia for more information about what has gone wrong with narcotics enforcement, and the still-common institutional racism in the South.
Posted by Suzassippi at 7:35 PM