My colleague and friend, Debra, and I headed to Jackson early Tuesday for a workshop on disaster response training. After the shortage of social workers able to respond post-Katrina, the departments of mental health and health have collaborated on training professionals for disaster response. I had the training in Natchez last year, but accompanied Debra to another workshop.
After the day in the Pearl City Hall, we drove to New Orleans to the Gentilley neighborhood where her daughter lives and spent the night. I met some really interesting folks and we had a great time eating Tanya's jambalyah and Korean food from a nearby take out. I had never eaten Korean, and had all kinds of new taste sensations--some tiny dried, pickled fish, black beans with very chewy texture, kim chee, and all manner of spicy pork mixtures--and the best rice I have ever eaten. Of course, since it was 9:30 p.m. by the time that all happened, my sandwich from lunch was long gone and even the pickled pig lips were starting to look good. 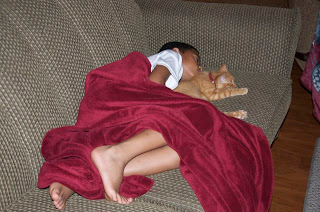 I was staying in the boys' room, and Trent fell asleep on the couch with his cat, Chase--formerly known as Bill. Yesterday morning, Debra went back across the bridge to Bay St. Louis to visit an intern and we got the boys ready to bring back to Mississippi with us. Finally a bit after noon and left over Korean food, we headed home.
Tanya's house was located in one of the neighborhoods that was totally flooded during Katrina. She is only a few blocks from one of the levees and Lake Ponchatrain. The surges left her home totally underwater.
We passed a number of houses on the way out that are still unrepaired. It was interesting to see a duplex with one side repaired and people living in it, and the other side still boarded up and with the markings on the house as to survivors or non-survivors. 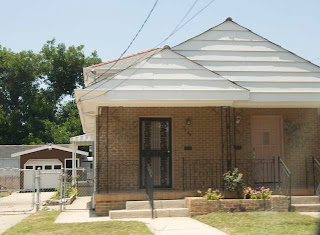 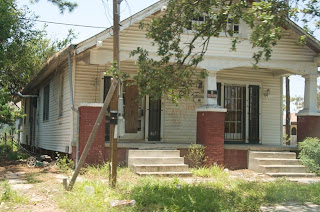 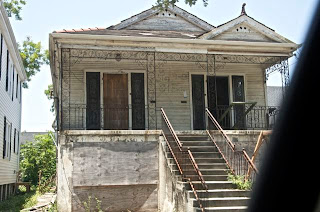 A residential school determined not to repair/rebuild. The buildings are sitting there empty, with only the remains of the Army Core "blue roofs" blowing in the breeze. 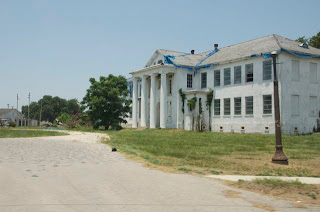 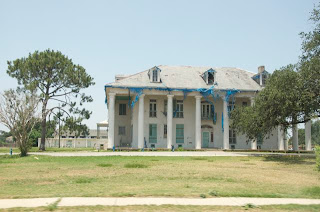 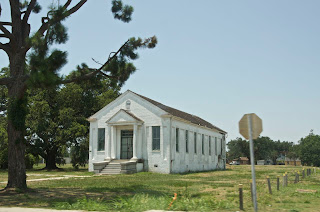 We had very little free time so I was unable to get much perspective on what is happening in the city on this trip. I will be spending 2 weeks there in August, however, and plan to get a better gauge of where the city is.
Posted by Suzassippi at 11:14 AM

It's amazing what damage was done- and so awful. We had several families relocate here after Katrina. As a matter of fact, one of those is Eli's girlfriend's family. He's going with them to visit New Orleans next month. I've never been but would like to someday. And I want to know the story behind "Chase, formerly known as Bill"!

The cat was named Bill (after Kill Bill) by the Humane Society, because he was so aggressive. The family renamed him Chase because he chases the other cat and they didn't think Bill was a cat's name. I kind of liked Bill, myself, and we kept calling him "formerly known as Bill."

Ha! Cute! I like Bill, too. I had 2 students named Chase last year, but I haven't had any "Bill" kids in a long time.