The Sisterhood of the Traveling Torties 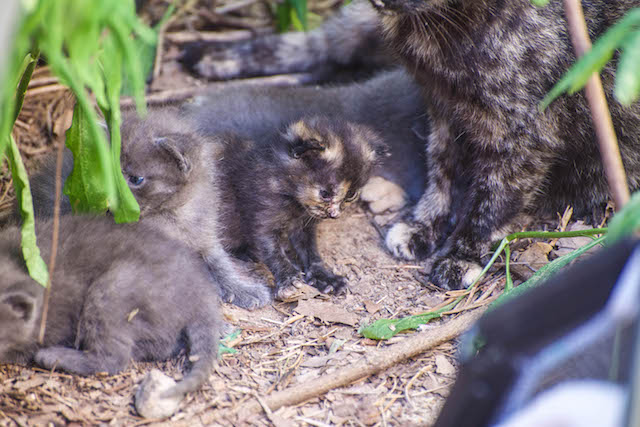 I was getting worried, and trying not to worry.  One day I had come out and found all the kitties gone from the front porch.  I know feral cats need a "back door" and to stash the babies where predators cannot find them--at least, hopefully.  I had heard them mewing one day at 'suppertime' and spotted them amongst the leaves and vines that cover the fallen tree in the front yard.  Then the rains came. 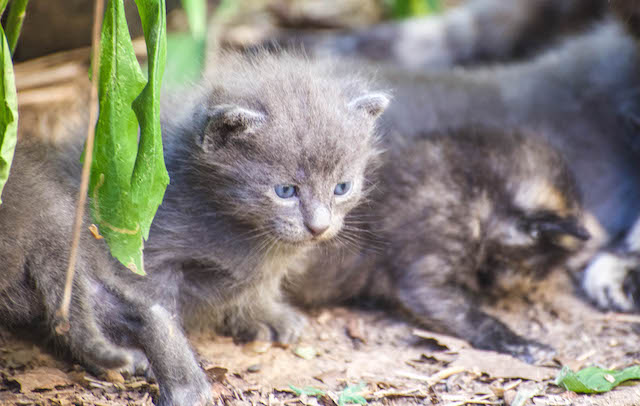 It was a low lying area under the tree, and I feared they would drown if Mamas did not get them moved in time.  I need not have worried.  After the rain stopped, I went out to find them gone from the second home in their short lives.  I knew they were somewhere around the kudzu by J's parked car as the mamas would come from that direction to eat when I put out food, but I could not see them.

Then came the day I spotted them...under the edge of the tire under my car shortly after I arrived home.  A stern lecture was delivered to mama cats and I moved them from under the car and back to the basket on the porch.  Before I even got the third kitten out from under the car, Mama was dragging one out of the basket and back that direction.  Frankly, she was having a hard time as the kitten was not at all cooperative over having been pulled out of a warm soft basket instead of under car on a rock driveway and now being dragged down a sidewalk.  Cats--were they raised in a barn or what?

I scooped it up (I know, I violated the non-interference with feral cats clause in the contract), put it in the basket with its other two siblings and moved the basket, which is inside the mesh and metal frame leaf bag from the lawnmower to provide better shelter and support from collapsing) over by J's car, next to the kudzu.  I figured if she was going to drag them all back, I could at least make it less traumatic.  (I know, I am thinking like a human, and not like a cat.)

Happily, all 3 mamas and all kittens seem to be satisfied with the basket near the kudzu, protected by a fence and a car, with 47 different escape routes.  Mamas rotate in and out of the basket to share nursing duties, groom kitties who venture out of the basket, and stand watch a few inches away.  Using the zoom lens, I was able to catch a brief glimpse of them late this afternoon.  Several days down and counting...

Oh dear, I was worried, but glad you intervened. Maybe the babies convinced the Mamas that the soft blanket was better, too!

Well, so far, everyone is happy, so I hope so! As before, sometimes two mamas are in the basket at a time, but mostly, it is all the kittens curled up together.