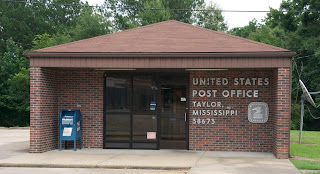 Last week, we got our notice in the mail for the proposal to cut hours at the Taylor Post Office as part of the USPS plans currently going on across the country to "save money."  Because changes by law must include community input for those who are affected, it came with a survey.  I will get to that in a minute, but first, a smidgeon of background, and the link in case you want to see more examples, from Bronx, NY to Berkeley, CA, and all points in between, like Climax, GA.


Before you can understand why they are doing this, you need to understand the problems facing the Post Office.  Prior to 2006, the US Postal Service workers have a retiree health care benefit in addition to their pension. Before Congress passed the Postal Accountability and Enhancement Act of 2006 (or PAEA), the USPS operated under a pay-as-you-go model for retiree health care funding.   In 2006, the Congress passed the Postal Accountability and Enhancement Act of 2006, and was eventually signed by then President Bush.  The bill stated that the Post Office had to pre-fund its future health care benefit payments to retirees for the next 75 years in just a ten-year time span.  In other words, they have to pay for health benefits for employees that A. have not even been hired yet and B. theoretically, have not been born yet.  No other government or private corporation is required to do this. (Salvatore Aversa, July 27, 2013, The GOP's Relentless Quest to Destroy the US Postal Service is Almost Over, OccupyDemocrats.com).

The USPS has overpaid (due to pre-payment) pension funds by an estimated $7 billion.  If not for the Postal Accountability and Enhancement Act of 2006 (PAEA), the post office estimates budgets in the black and with a $1.5 billion surplus.  We are talking postal funds here, not taxpayer funds.  The recently proposed Postal Reform Act of 2013, introduced this past week, will further disable the post office and create more of the downward spiral by closing more post offices, selling historic buildings with art from the New Deal Administration projects under President Roosevelt, and open the door wider yet for private contractors to "fill the gap."  The post office will lease facilities that they once owned, or consolidate services resulting in hardships to communities--all because of ill-advised policy enacted with the thought toward eliminating the USPS (and its jobs that were a move to solid middle-class for many US citizens).

From the survey seeking input to reduce postal service hours in Taylor:


Please select the alternative below which you would most prefer (choose only one):

1. Keep the office open, but with realigned weekday window service hours, based on actual office workload;

2. Conduct a discontinuance study for the office and provide roadside mailbox delivery;

3. Conduct a discontinuance study for the office and find a suitable alternative location operated by a contractor;

4. Conduct a discontinuance study for the office and relocate P. O. Box service to a nearby Post Office.

So, here's your choices: what we want, or lose the post office entirely.  And on its surface, it is a logical appeal, because the news has made sure that we all know about the financial crisis and how austerity and cutting services is the only way to fix it.  The problem of course, is that they have not informed us how this crisis was manufactured in the first place due to poor legislation and a policy that is untenable.  A budget was created that no amount of the post office breaking even could address, and there is only one reason Congress would do that: intention to see this institution fail.

The letter that accompanies the survey adds:


The Postal Service is also seeking locally established businesses or organizations to serve as contractor-operated postal retail units in communities like yours.  If you are interested in operating a postal retail unit, please visit the website...

There will be a meeting as well, after all the surveys are received and tallied, because community input is required by law.  It has not made any difference in the decisions made in all those other post office closings, where decisions were made prior to the community input.  Challenges to many post offices plans to sell historic buildings and either relocate to leased space or close services has not met with much success.  In recent news, Bronx Representative Jose Serrano at least stepped up efforts to slow or halt the sale of the historic landmark Bronx post office, which houses 13 murals by Depression-era artist Ben Shahn under the New Deal Administration:


On the political front, Congressman Serrano who represents the district, recently attached a provision to a House spending bill that keeps the sale in limbo until the USPS Inspector General reviews the legality of the selling process. The bill is still churning through the House.

“We cannot have the gems of our communities, often landmarked and protected, sold by the USPS to the top bidder in a wanton and careless manner,” Serrano stated. (David Cruz, Bronx Times, Hurdles in Sale of Bronx GPO, July 26, 2013)

I cannot argue that the Taylor Post Office is a historic gem, nor does it contain important art as it was not built under the New Deal Administration.  In fact, I cannot find out anything about the building itself, other than the address.  I rarely even use the post office building itself, as I am closer to Oxford than Taylor.  But, I try to live a life where things are not just about me, but about the well-being of all of us, and what is good for our communities and the 300+ folks who do live in the town of Taylor.

When did so many of us get so mean-spirited that we don't care about that anymore?