On Race and Ethnicity and Naming

In my last class, I used the term "Caucasian" as did an African American student.  In tomorrow's class, we are discussing engagement, assessment, and intervention with families, and I use the photograph below to initiate a discussion about assumptions about families. (The discussion has nothing to do with race/ethnicity, by the way.)  While I generally use the term "White" because it is more common, there are times I say Caucasian; I am more likely to say Euro-American when referring to white people from the United States.  Just like I generally say African American (when referring to citizens of the United States who are of African descent) rather than "Black."  I use the term black when talking about populations other than the specific residents of the US.

So, what is the point?  That's probably a good question, and one that has resulted in my spending quite a bit of time this afternoon (time I do not actually have either) considering this issue.  It all started with reading an article in the New York Times this morning, entitled Has Caucasian Lost Its Meaning?  I was scanning the article, and noticed a quote. 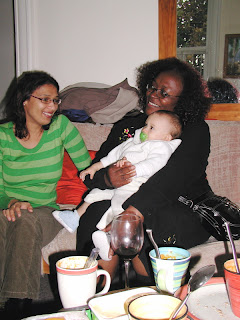 Susan Glisson, who as the executive director of the William Winter Institute for Racial Reconciliation in Oxford, Miss., regularly witnesses Southerners sorting through their racial vocabulary, said she rarely hears “Caucasian.” “Most of the folks who work in this field know that it’s a completely ridiculous term to assign to whites,” she said. “I think it’s a term of last resort for people who are really uncomfortable talking about race. They use the term that’s going to make them be as distant from it as possible.”

I am fairly certain that my reaction on reading that would have been the same, regardless of whether or not I had recently used the term Caucasian.  Last resort?  Uncomfortable talking about race?  Seeking to be as distant from it as possible?  None of those things describe me (and if you are a regular reader, you know that from the times I post on the topic of race and ethnicity, not to mention my ongoing work in this area for many years) and I suspect they do not describe a lot of folks who might use the term.  I won't argue that after some research, the term is obviously no more accurate than the term Negroid, or Mongoloid, (neither of which has been used in some while) but it seems to be somewhat of an overgeneralization to ascribe it as "a term of last resort for people who are really uncomfortable talking about race."

Further, the description of the term as "completely ridiculous" stuck out.  Ridiculous, according to the dictionary, means among a number of other things, the following:

And yet, I located 2, 418 scholarly journal articles from reputable journals from 2010 to 2013 with the term Caucasian in the title and the contents.  There were 923 of them from 2012 to the present.  Again, I don't disagree that just because some educated researcher uses the term means it is "correct" but nor do I assume that it means someone uncomfortable talking about race, or someone who is racist.  I am more likely to assume that it is a convention to which they have grown accustomed, and one that has apparently only in recent years been questioned and now challenged.  While I am widely read and my work encompasses many issues about race, ethnicity, and naming or labeling, I have no recollection of hearing anything about the term Caucasian that indicated it represented racism and a belief in whiteness as the top of the hierarchy.  Granted, my work is not solely about race, but race and ethnicity certainly is a rather large portion of it.

The term stemmed back to the work of someone named Blumenbach and his efforts (apparently, considered quite scholarly for his time in the 1700-1800s) to classify people according to some terminology that would account for differing physical characteristics.  He used geography, and primarily skull shape.  Geography was the primary reason for the descriptive terms he chose, though Caucasian was not his first choice, but rather, arrived after several iterations of his work.  (It came from his description of a skull from the Caucasus area of Georgia--the country, not the state.)  His original five types were summarized into three types later: Caucasoid, Negroid, Mongoloid.  Although his later work exemplified a clear preference for whiteness in his admiration of physical characteristics (and one might assume that as a white European, that would not be all that unusual for ethnocentrism to color his work), Nell Irvin Painter explained:


The magnitude of Blumenbach’s contribution to scientific racism sometimes lumps him in with the white-supremacist mass of racist scientists and pseudoscientists. Although he survived into their times, Blumenbach was not such a figure. Through his wide correspondence and influential publications, Blumenbach consistently opposed nonsensical propositions advanced by colleagues like Meiners. A conscientious collector of artifacts crucial to his study, like skulls, Blumenbach also assembled the first collection of books by Africana authors in order to support his contention that people of African descent were not essentially inferior to other races. In the history of black bibliophilia, Blumenbach stands at the head of the line. (Why White People are Called Caucasian, November 7-8, 2003, Yale University)

Posted by Suzassippi at 7:37 PM

Funny, I read that same article earlier today and had the same reaction you did. I think white people "our age" were taught to refer to ourselves as "Caucasian" for one thing, so I have used it comfortably and out of habit if it seemed to be appropriate for the occasion. In fact, I think I remember being told "white" was not a race and should not be used, at least not officially, when asked to name one's race. Of course, times change, labels change, some that were once acceptable become inappropriate as we have seen happen over time (and rightly so). While "Caucasian" may not be accurate and perhaps "white" is now the way to go, I completely disagree with the blanket assumption that it's only used by people who are uncomfortable and don't want to talk about race. What a leap!

The more I think about it, the more I think it is an effort to use the same terms. If you don't say black or brown (or red or yellow), you don't say white. We use ethnic specific terms for everyone who is not white. Maybe there was a logic in South Africa just calling it black, coloured, and white. So while Caucasian is not accurate, maybe neither is White.