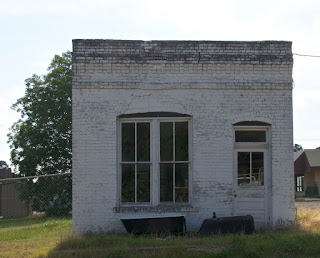 According to records in the Library of Congress-National Endowment of the Humanities project Chronicling America: Historic American Newspapers, the Lewisville Herald was published from 1917 until at least 1970 (papers exist from that time) although the exact date publication ended is not identified. 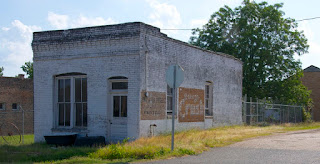 According to the Lafayette tax records, this building was constructed in 1950 and is 75x140 feet--small, but could have held a printing press for a small town newspaper.  My uncle owned a similarly designed print shop for many years, and he cranked out a lot of paper in the small building that looked similar to this one.  The deed was transferred in 1967 from H. E. Watson, Jr.  Original publisher was H. E. Watson, so there is clearly a connection of some kind. 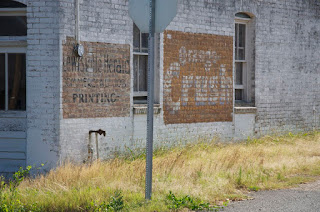 Dismukes was the editor and Watson the manager; in 1919, Dismukes sold the operation to Watson, who took over all responsibilities for the paper.

I am not clear about the purpose of the two bathtubs in front of the building unless they recently filmed a Cialis commercial in town.
Posted by Suzassippi at 11:03 AM

I love the "Orange Crush" ad painted on the brick; it was a favorite childhood drink!