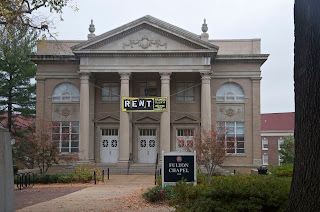 Fulton Chapel was first used for commencement in 1927 according to Walton's  The University of Mississippi: A Pictorial History, though the sign in front indicates 1929.  Named after Chancellor Fulton, the columns are Indiana limestone and it was the largest auditorium on campus until Gertrude Ford Center was completed. 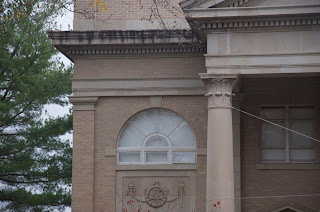 Architect was C. H. Lindsley, who designed a number of Mississippi buildings before dying in obscurity.  The interior of Fulton is as dramatic as the exterior, and still hosts campus theatrical functions.
Posted by Suzassippi at 3:04 PM

That Claude Lindsley could design a building, couldn't he?

It is one of my favorite buildings on campus, and someday in my next career, I hope to act in a stage production there. That's right after chef, historian, and photographer, since I was an actress in my first career.