Emil Bisttram's "The Crossroads Town" was completed in 1939 through the Treasury Section of Fine Arts program of the New Deal Administration.  Bisttram was a Hungarian-born New Mexico artist who served as the New Mexico supervisor of the first federal art project (PWAP) (Flynn, K. A. (2012). Public Art and Architecture in New Mexico, 1933-43: A Guide to the New Deal Legacy. Sunstone Press: Santa Fe, NM.).

Bisttram's family immigrated to New York City from Hungary in 1906, where his artistic talent became evident (wikipedia.org).  He first visited the art colony in Taos, New Mexico in 1930 and "fell in love."  He won a Guggenheim in 1931 and traveled to Mexico to study mural painting with Diego Rivera.


Even the most peaceful scene--the townscape in the Ranger, Texas, Post Office, from 1939--has a story to tell. The artist found Ranger a virtual ghost town but gave hope to the former boomtown with a picture of the clean, prosperous place it could once again become. Hope on the wall, for a mere $880 (the artist's unprincely fee!) (Marling, K. A. (2004). [Book Review] The Texas Post Office Murals: Art for the People by Philip Parisi. Great Plains Quarterly)


Jack Matthews (J. F. Matthews Fine Art, jmatthews.com) proposes that the figure in the mural who is holding a long, narrow bag is Bistrram himself.  He is dressed differently from the agrarian attire of the farmers and ranchers depicted.  Other muralists (for example, John McCrady) apparently inserted themselves into their murals.
The Ranger Post Office, like many of the other New Deal post offices, bears the wooden entry vestibule, and the simple exterior design common to many of the buildings designed during this period. 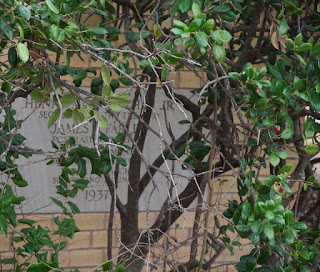 Almost obscured by the hedges is the cornerstone with the office of the supervising architect present on the New Deal post offices.
Posted by Suzassippi at 6:34 PM