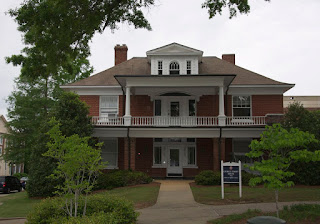 George Street House...for the past ten years, I have thought of it as the house on George Street...and while I confess to wondering why this was George Street, there are stranger names on campus.  George Street House was built in 1914 in the Colonial Revival, Craftsman style according to the Mississippi Department of Archives and History.  You can see other photographs that show the detail of the side and porch here, without all those trees in the way.

George M. Street, who received his BA and JD from the University served in a variety of administrative positions between 1949-1985, including the Supervisor of Student Housing, Director of Social Affairs, and Assistant Dean of Men to name only three.  The house was designated a Mississippi landmark in 1992. 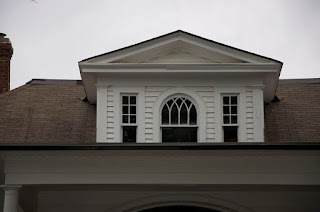 What actually drew me to photograph the house last weekend while documenting PWA buildings on campus was noticing for the first time in ten years that the window on the dormer had Y tracery.  Now granted, I only learned about Y tracery a mere six months ago, so I could hardly be faulted for failure to observe this unique little detail prior to that.  Or if I had, I would have thought, "oh, that's a cool window."

I will have to set aside some time to go over to the library archives and check out the George M. Street Collection, which includes those related to James Meredith's admission (letters from parents and students, no doubt that will be an interesting read), Robert F. Kennedy's speech on campus, and Civil War correspondence.  One title that particularly beckons is named Community Plan to Counteract Racial Agitators.  There is also a copy of The Dan Smoot Report, October 8, 1962, titled "The Mississippi Tragedy."  Smoot was a former FBI agent and conservative political activist according to Wikipedia, who resigned from the FBI (amid some controversy) and "chronicled alleged communist infiltration."  We all know how the communists were alleged to be behind the Civil Rights movement, because you know how equality is such an undemocratic notion.

Pretty amazing how a simple thing like a Y tracery window could open my eyes to yet more of the fascinating history of this place I call home these days.