Going inside the Jermyn Methodist Church

It is rare for me to go inside one of the many buildings that I photograph.  In fact, my first instinct was to photograph the church from the car, thanks to the two very large and barking dogs that came running up when I pulled to the side of the road after spotting this carpenter Gothic abandoned church on First Avenue and Wise Street.  However, a drive down the block and return and the dogs had gone home to nap in the pleasant sun of that afternoon.  Feeling emboldened by their non-attention while I was walking around the outside, I decided to just step up to the open door of the vestibule and take a quick peek inside...which turned into a full-fledged visit. 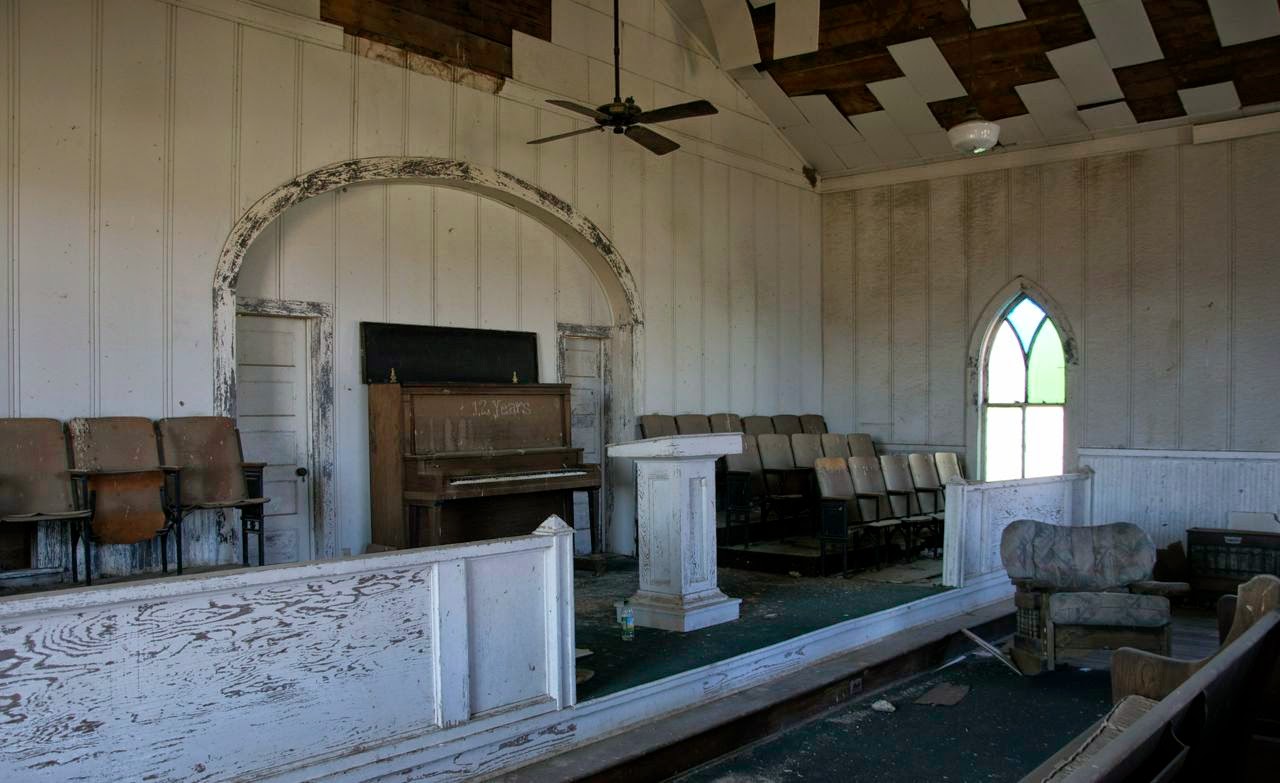 While shingles have fallen from the ceiling, there did not appear to be external roof damage, sparing the sanctuary from the ravages of rain.  In an instant, I was reminded of my first childhood church at Newcastle, and the wooden chancel rail that separated the worshipers from the choir and clergy.  I would kneel on that step in front of the rail for many an altar time or communion at our church in Seymour or Graham. 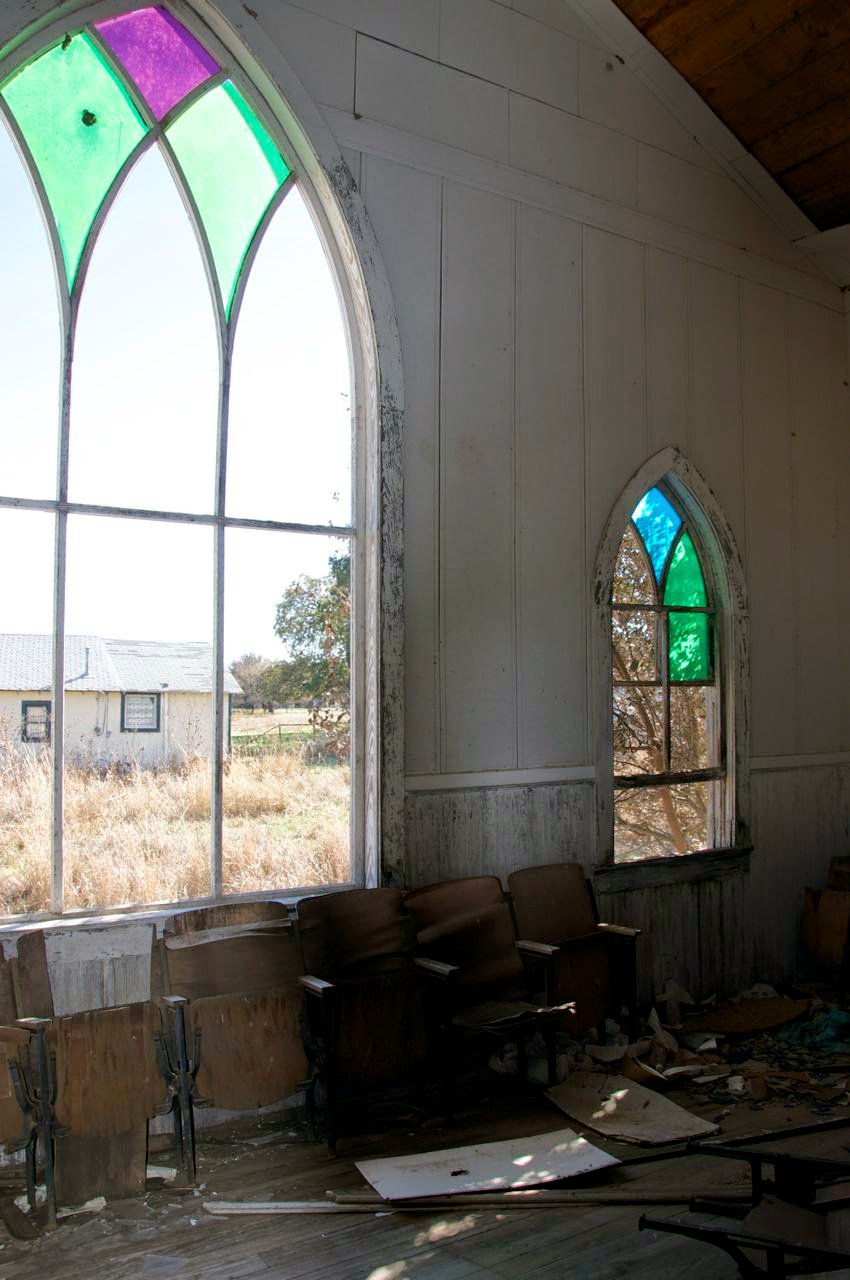 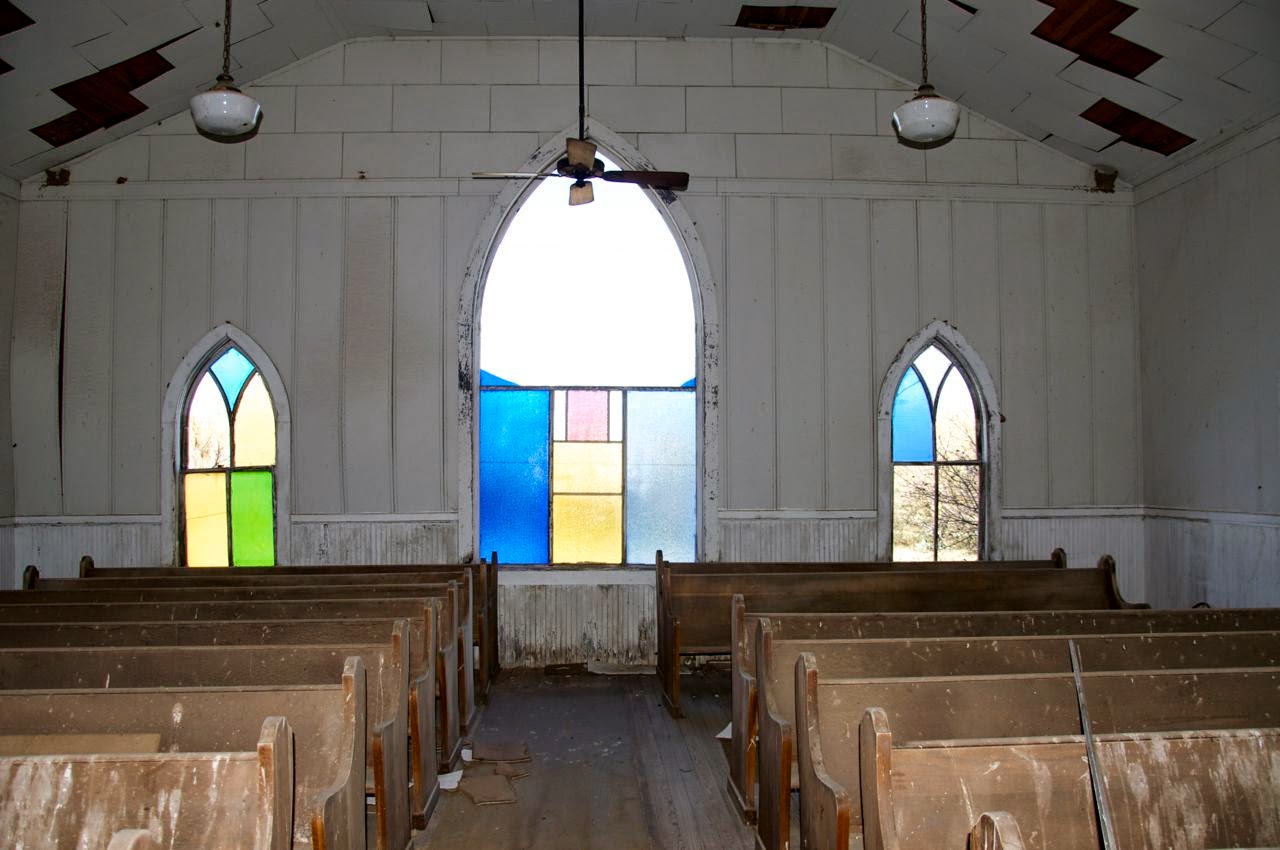 While the roof is still intact, the broken and missing panes in the windows have opened the building to birds, who have determined the backs of the pews are a fine roost.  I felt a sense of sadness, seeing streams of bird droppings where people once sat while contemplating their inner spiritual lives, the outer demonstration--or lack of--and planned and hoped and dreamed...and yes, some who impatiently waited for a final Amen and the end of a weekly ritual. 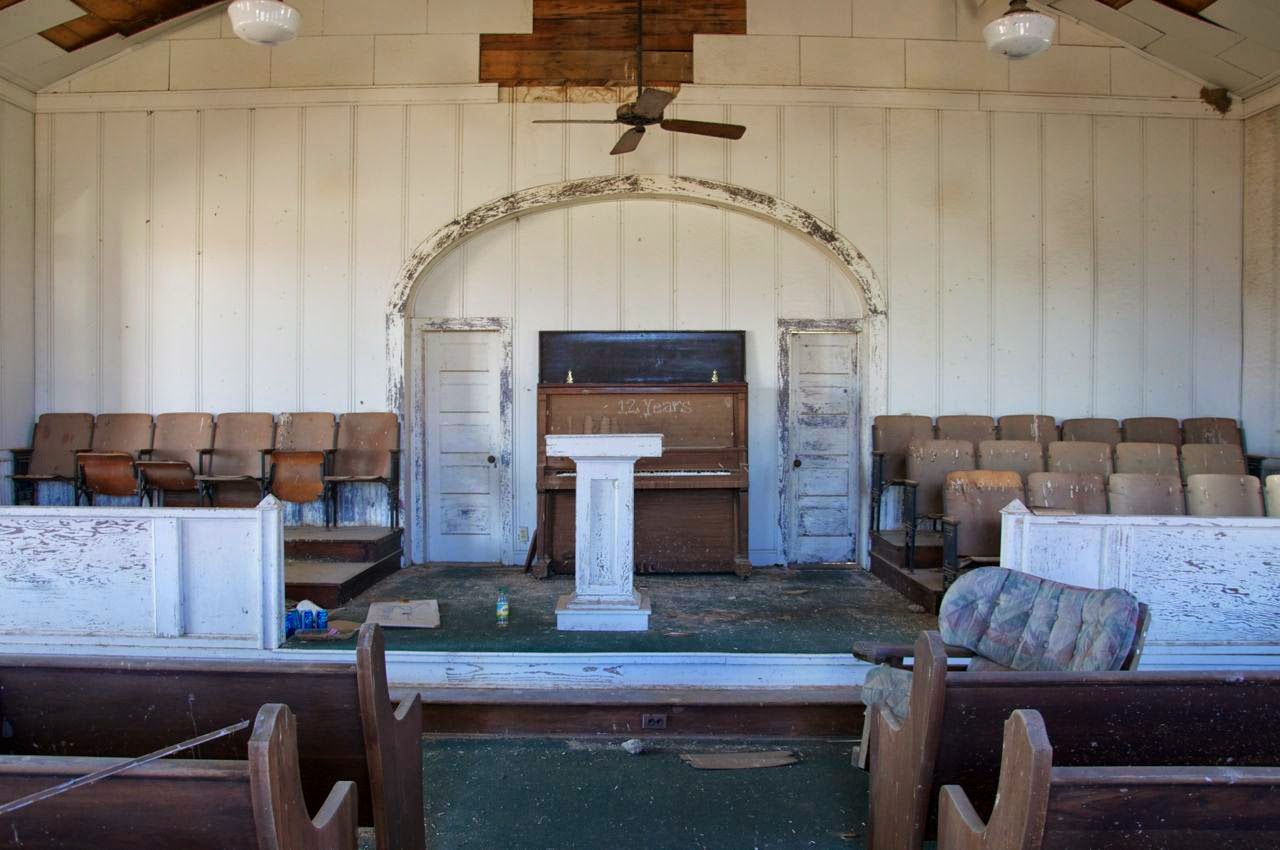 I tried to imagine having sat in that sanctuary in 1910--albeit in different seating.  The folding wooden attached chairs debuted as early as the 1890s, and came in a variety of simple styles, and some with decorative cast iron end pieces. 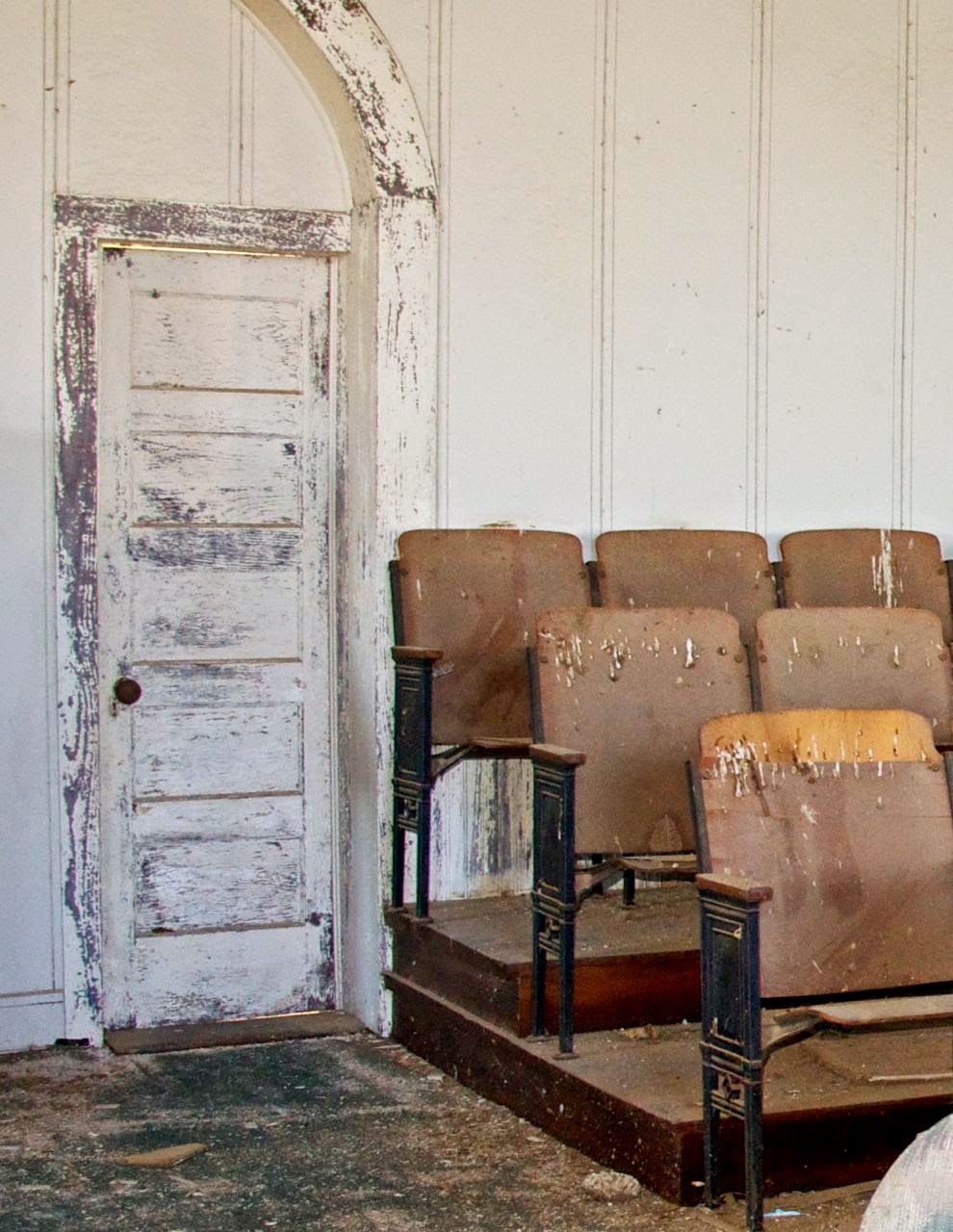 American Seating Company manufactured many of the ones sold in the US.  Had I thought to look, I could have searched for indication of the manufacturer.  Hind sight is rarely helpful, unless it is recalled in the next opportunity.  All too often, though, we forget the little details that later we wish we had thought to check. 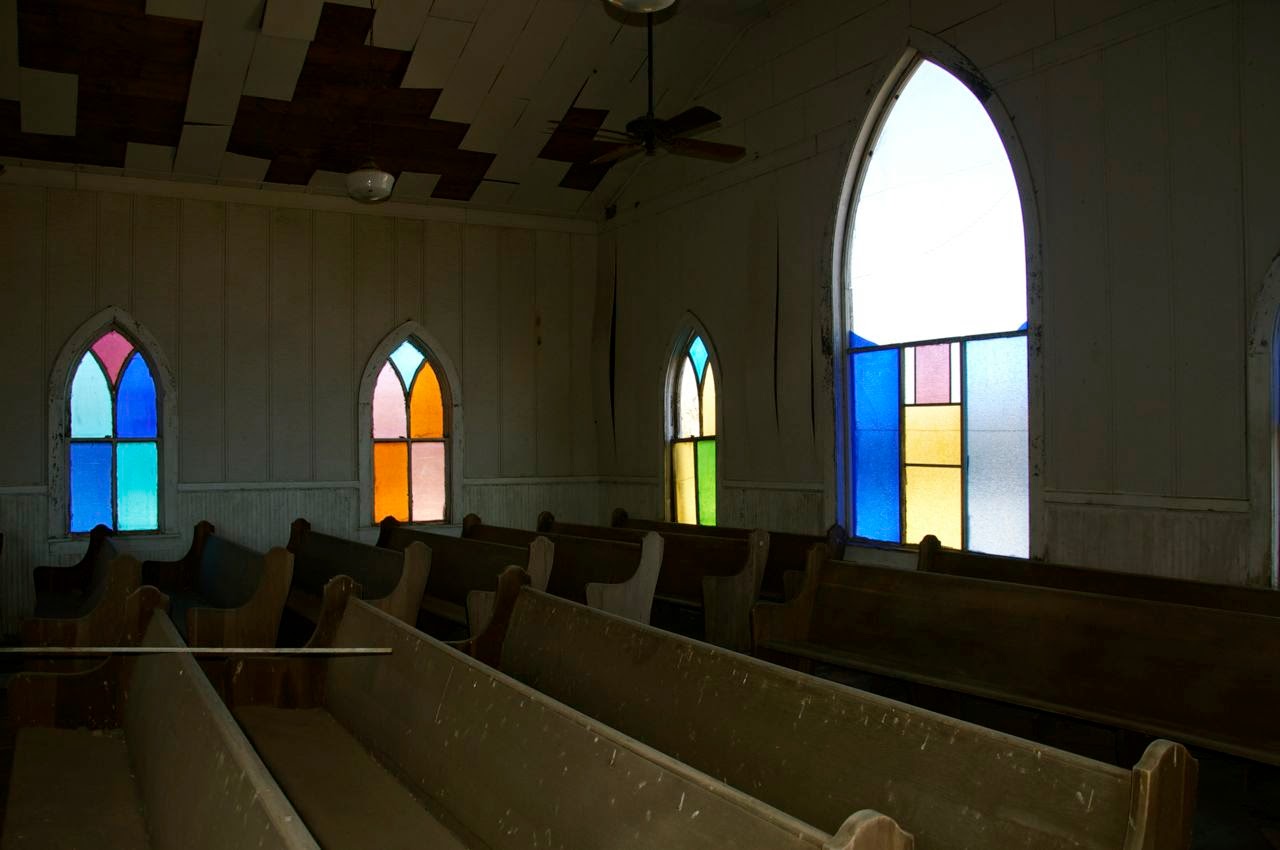 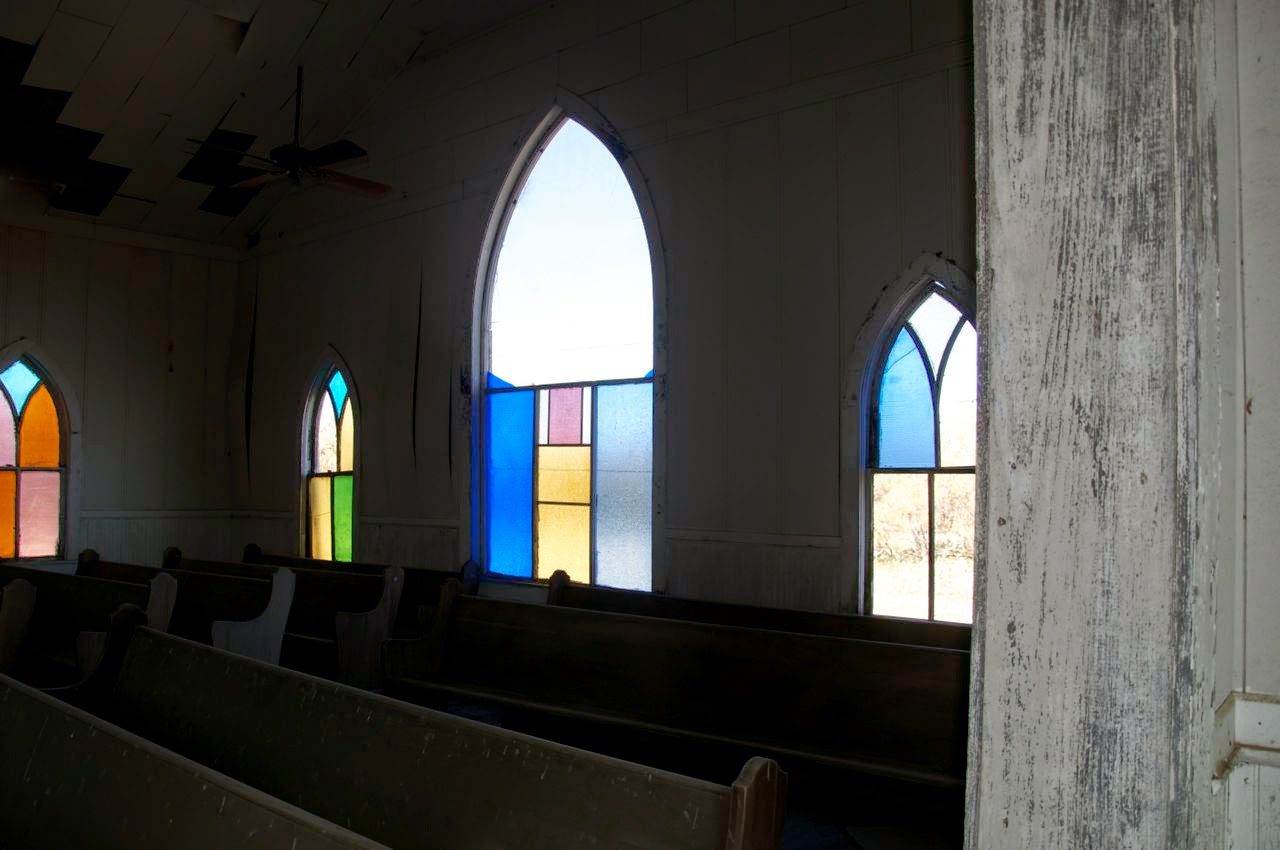 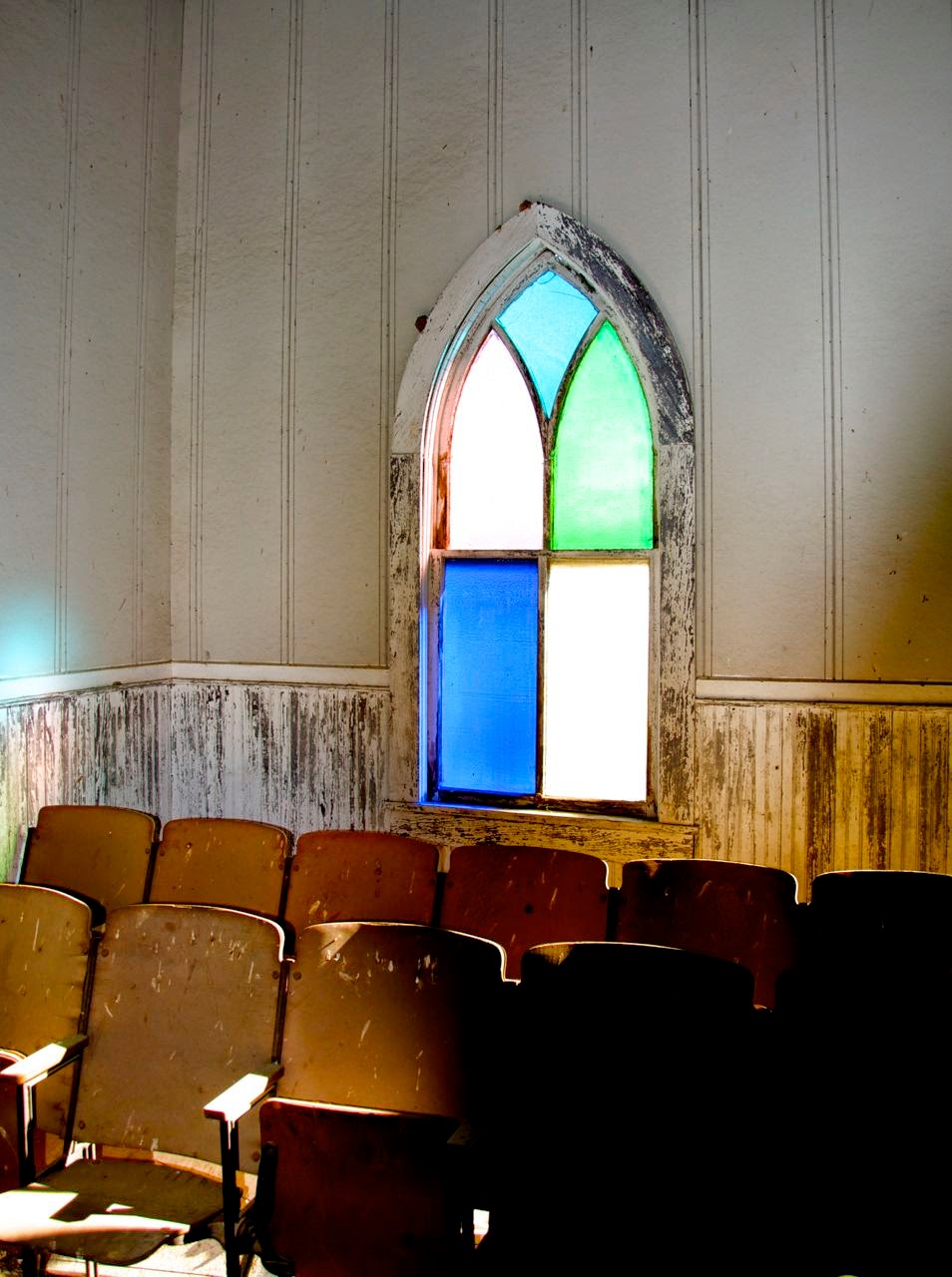 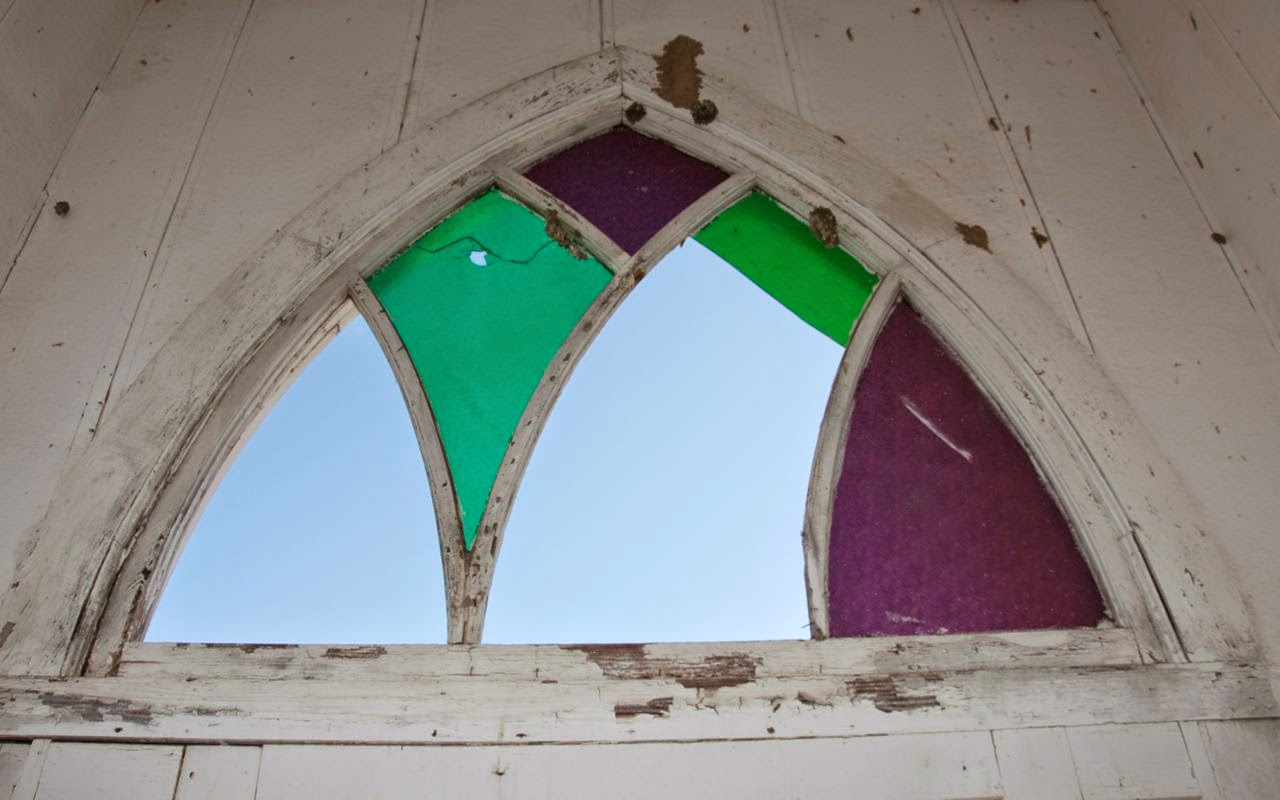 A few of the windows remain intact, and evidenced a variety of color patterns.  Each window, viewed from varying vantages, cast different reflections and highlighted different focal points--a poignant reminder of life.
Posted by Suzassippi at 10:42 AM

This is a beautiful church building. I hate that is not in use.

Me, too. I always wonder what happened that people or organizations close up the doors and walk away. The current use (based on the empty Bud Light cans and ashtray full of cigarette butts) seems to be a hiding place for the local under-age crowd.

How sad that it has been neglected when it could have been taken care of and converted into another use. I can see a book store, a yarn shop, or a quilt store in this place (all with a cozy little coffee/tea corner and comfy seats).

I'm always amazed too that these buildings are left to rot. But I know of some church leaders who were unwilling to sell because they just "knew" that things would turn around and they could get the church going again or sometimes getting a clear title is so difficult that even if someone is interested they end up walking away because it is such a legal quagmire. For whatever the reason, it's so very sad.

I think the clear title thing is very relevant. A church near home "sold" and was moved to a new location to be converted to a house, only to have members of the congregation (which had not been active in years) say they had not voted to sell the building.