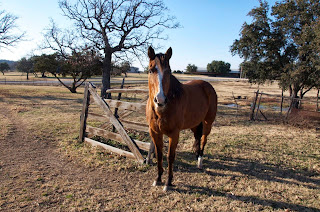 In the past year, I have spent many days back home in Texas helping taking care of my parents.  My favorite chore while I am there is feeding and watering Rio. 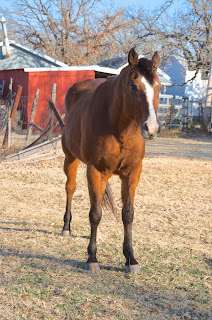 I don't recall the actual year Dad got Rio, but it was after they started going to Cowboy Church.  The elder men would ride their horses up to the arena and mentor the younger kids.  Dad told Mom he thought he needed a horse so he could go, too.  Dad has always been an animal lover, having grown up in the country with not only dogs, but farm animals.  To be sure, the animals were for food or for work (for example, my dad has plowed a field using a team of mules), but nonetheless, he has a fond spot for them. 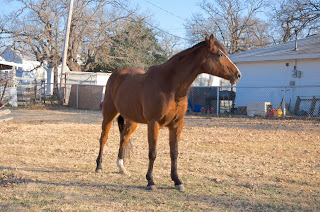 He bought Rio from a neighbor to his parents' land--a man who had raised horses for a living. I remember Dad talking to me after he first got him, and laughing as he mounted--he said he had to grab his right leg with his hand and pull it over the saddle as he could not just swing it across.  We all allowed as how if he was 83 and still able to get on a horse at all, he was doing pretty well.  Before long, he would have to lead Rio to the deck to use as an "upping block" in order to mount.  It was only a few feet up the road to the arena in which Cowboy Church was located, so Dad would ride up there rather than trailer Rio and drive it. 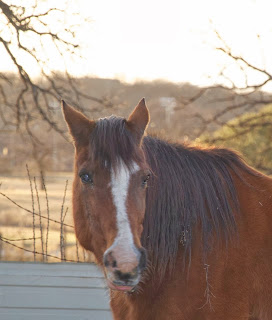 I was never there when Dad was riding, so that is a memory I don't have, but he shared many of the stories on the phone of the day's events when they would have the Play Day at the church arena. 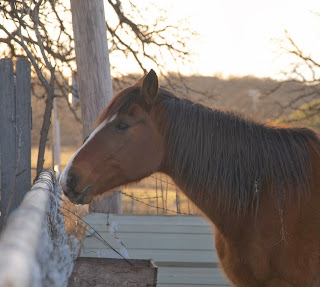 Last fall, my sister and I mastered the art of cleaning out the water trough--a cast iron bathtub that is heavy when empty.  On the last trip, I managed to clean it out by myself, with Rio standing patiently behind me, watching and waiting.

I do get to fork hay in the winter, and that was a pretty wild chore last week when I could not get the baling wire off the bale of hay.  The wounds are mostly healed now, with only two small scabs left to show the results.  Next time, I will be sure to have those wire cutters in my pocket, since Texas does not use seagrass string to tie up bales of hay.  (Shout out to Lana for teaching me something new about my adopted state.  However, I will point out that there are myriad uses of baling wire, and my grandmother was proof.  She practically built her yard fence with baling wire.)

Because I am pronoid, the exchange is vital to me, and because I understand something about stability, the consistency is important to Rio, to Dad, and to me.  Last week, as I was forking hay, Rio came up to watch me.  I stopped and petted him, talking to him.  Back at the house, Dad said, "I saw you petting my horse out in the pasture."  Dad had been standing at the kitchen window and looked out to see me and Rio.  That little memory is tucked inside my heart now.  Simple, but profound, knowing he knows that Rio is more than a chore to be done, knowing that he knows I value Rio as more than a chore to be done, but rather, a relationship to be maintained.  Rio is like therapy: in the midst of all the endless uncharted terrain of the past year, he is just there, quietly standing by me, accepting my affection, returning it with his nicker of thanks, and helping me maintain connection with Dad and Sis--because she and I are committed to keeping Dad's life as normal as possible as long as possible.

Here's a little present for Dad:

This was lovely; I had to reach for the tissues! There is a bond with our animals, they are our therapy as well as companions.

Thank you, Beth. I know you understand--I see it in your relationship with your dogs. I still have hope that dad will be able to get down to the barn to see Rio in person again this spring and give him that handful of grain himself.

Even in the midst of the worst periods of my life there were still horses and for that I am grateful. If you've never had that bond there is nothing like it.

Oh, bailing wire is a beautiful thing. The trainer I used to spend a couple of weeks with during the summer bought hay from out west by the tractor trailer full. It was bound with wire and their place I think was literally held together with the stuff.