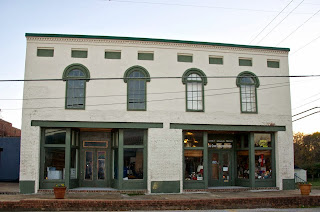 McCrary's was the first of four general mercantile stores in Byhalia in its early years (Watson, 2008, Burrow chronicles Byhalia's past, The South Reporter online).  The Commercial Italianate building was constructed in 1884 (Helms & Kaye, 1995) and was owned by W. C. McCrary.  Described in the National Register of Historic Places nomination:


Two-story, brick and stucco, commercial building with a parapeted front facade and denticulation near the parapet. There are eight recessed areas immediately below the denticulation. There are four semi-round windows with double arch brick header coursing over the top of the windows which are 6/6 double hung. There are two entrances to the building with 6-lite transoms over each entry. The entrances are recessed and have plate glass windows around them. There are transoms above each of the two storefronts, and a flat roofed awning supported by posts spans the facade. Windows on the side of the building are 6/6 double hung. (Helms & Kaye)

The awning and posts have been removed.  McCrary's closed in 1970.  It was subsequently damaged by fire some years prior to 2008--perhaps that is when the awning and posts were removed--(Watson, 2008) and considered a hazard.  The Burrow family of Byhalia was instrumental is saving the building. 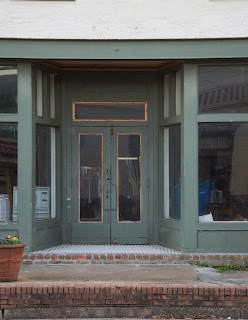 According to Jean Burrow's oral history of Byhalia,


The store sold general merchandise and groceries on one side, clothing and fabric on the other and seed out of the basement. (Watson, 2008) 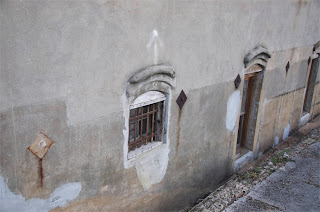 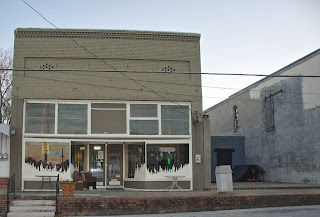 The upstairs was used to store caskets and as a morgue. Caskets were brought up the outside stairs and through the fire door. McCrary's was one of the first buildings in Mississippi to have a fire escape, Burrow said. (Watson, 2008)

I suppose that solves the mystery of the second floor door to nowhere.

Additional mystery is enshrouded in the story of the missing building between these two remaining buildings.  According to Burrow (Watson, 2008), McLeary's store was next door to McCrary's, and was destroyed by the fire that damaged McCrary's.  A fire is reported to have destroyed a downtown store owned by Hubert Mills in 1974, but no details of the location of the store (Donald J. Simon, 1974, The once and future Mississippi, The Harvard Crimson).  According to MDAH and Helms and Kaye, McLeary's was the building in the photo above, and Horn's store was located between the two.

The correct answer is out there somewhere.

Very interesting. I looked up the name and saw a surprisingly detailed history in Wikipedia:

Quite an interesting history! I did go back and look at the photographs in the 1995 National Register nomination, and the building between McLeary's and McCrary's was still in existence then.