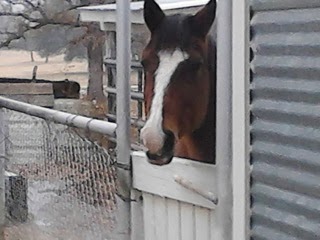 Rio was waiting for me this morning in the frosty sunlight--happy to see me again, and nickering softly as I held out his handful of grain.  The grain barrel was almost empty and I had to dump a new bag of feed before I could get enough for the morning feed--no easy task to do when it is below freezing and your hands don't want to work well.  It was a rough go to break ice on the water as well, but I finally got it free enough to enable drinking, and of course, the sunshine and 60 degrees melted it off later in the morning.

For some reason, the hay was so tightly packed that I had a hard time breaking the bale loose to get a slap on the pitchfork, but finally managed that task as well.  I filled the hay trough, and the next difficult chore was trying to get the gate re-locked as by then my fingers were really cold and having a hard time with opening and closing the clasp on the chain.  Definitely easier to take care of horses in the summer and spring time. 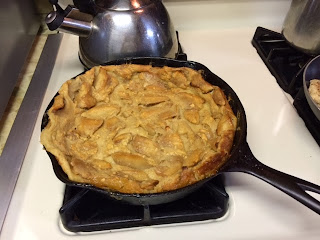 Tonight, seeing as how it was Christmas Eve, I made the Apple Skillet Cake again, using the molasses in white sugar to make my own super moist brown sugar.  It looked similar, only slightly different, and had the caramel-like texture and taste again.  It was not exactly the same, but definitely much closer than the Mississippi version.  Dad suggested that I make it again soon, so as not to mar the test by allowing too much time to lapse between versions.  I can appreciate his desire to ensure we are as objective and scientific as possible in the mission of accuracy, so I assured him I would do my best to test his theory.

Sis is here tonight and we hope for a calm and peaceful night with everyone sleeping well, and a quiet and calm family Christmas Day tomorrow.  Maybe Santa will leave more apple cake.
Posted by Suzassippi at 12:48 AM