Does the post office know where Diomede, Alaska is?

Diomede is an island in the Bering Strait, north west of Nome, Alaska.  They get mail delivery once a week, via helicopter.  I mailed a package to Diomede on September 7.  I explained the once-weekly mail delivery, and asked what the delivery date was for parcel post so I could decide if it was worth the considerable difference to ship the package priority.  I do know that I can ship a package priority to Unalaska--another island in the Bering Sea, but considerably larger and with an airport,  and it will arrive in about 4 days.
The postal worker looked on the machine and said priority would get the package there in 3 days and parcel would get it there in 15 days.  I opted to pay for priority, assuming that it would be in Nome in time for the weekly mail run.  Remember the rule: Assume nothing.  It is now 25 days and the package is not on Diomede.  But then, they did not have mail delivery last week due to the weather.  They are "hoping" the mail chopper will be able to make the trip on Monday.
I learned a lot about living on an island in the Bering Sea during my 5 weeks on St. Paul, Alaska a couple of summers ago.  The pictures below are some of the relentless fog that shrouded the island almost every day.  Sometimes, it was so thick I could hardly see to walk to the store, with visibility only a few feet in front of me.  I don't know if Diomede is foggy, but I do know it is windy and the sea does not often cooperate.  There are no planes as there is no place for a landing strip.  Until a few years ago, the mail was dropped from the helicopter as there was no landing pad.
I learned that the average "weather cooperating" time for a package to reach Diomede would be a minimum of 3 weeks, and maybe longer.  I guess I need to mail early for Christmas. 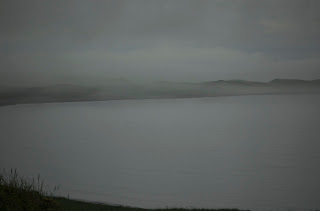 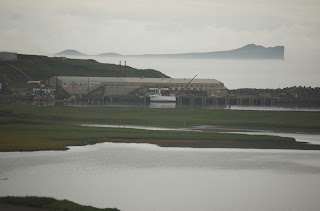 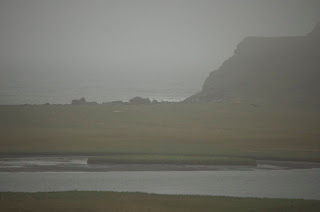 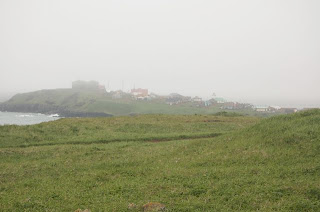 The village on a typical day.
All of that reminded me of the mail saga when I first moved to Mississippi and went to mail a letter to South Africa from the post office near my house in "Lottabusha County."

I went up to the counter and said, "I want to mail this letter to South Africa."  She put it on the scale, and turned on one of those little things that brings up all the country codes, of course, after saying "I don't know the country code for there."  She looked through several pages of them and said, "there is no South Africa."  I said, "Yes, ma'am there is."  She said well, it wasn't on the country code list, so it must be called something else.  She said, "I'll just look under Africa."  I smiled politely then, thinking who knows where the package I am sending C and L will end up.  "No, there's no country code for it.  Is South Africa a country?"  I was looking at the customer side screen and she finally got down to the s's and I spotted it.  "Yes, right there."  She turned a computer page too far and she was in Tanzania--also conveniently located on the continent of Africa.  "Go back one.  The other page."  She obliged and I said, "Right there, it's code # 281."  She punched in a code and up popped Guatemala on the screen: Code 181.  She said, "Is this it?"  "No, ma'am that's Guatemala.  I want South Africa.  That's code # 281."  (I was thinking no wonder the mail service is such a mess.  The employees don't know South Africa from Guatemala.  Excuuuuuse me, did I say Guatemala?)  She put in code 281 and sure enough, up popped South Africa on the screen.  Her eyes got big and she said, "That's $1.55.  Is that what you usually pay?"


After mailing packages to islands in the Bering Sea--which do belong to the United States-- I imagine $1.55 is quite the bargain.
Posted by Suzassippi at 3:22 PM

Yes, there's that other mail issue called "packages being bumped to make room for other (perceived to be) more important items." When I used to go to Atka and Nikolski, the people would tell stories of items they'd ordered taking months to arrive because they kept getting bumped for other stuff. Sometimes important stuff like groceries, but sometimes it just seemed to be based on the whims of whomever. Definitely mail early for Christmas! Like now. :)

Well, this is both scary and comforting. Scary, as it was food. Comforting, as I can save all that money on priority mail. LOL