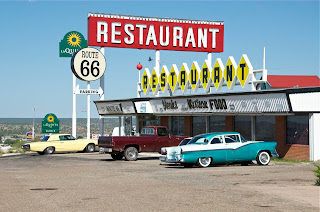 What else would you expect on historic Route 66? 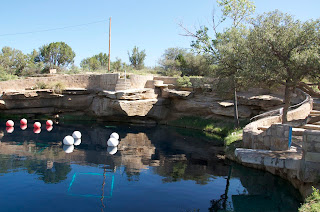 A quick detour down a side street to see the famous "Blue Hole" diving spot--somehow I always thought it would be something more exotic than this. It is 81 feet deep and water outflow is 3000 gallons per minute. This early in the morning, there was no one diving yet. 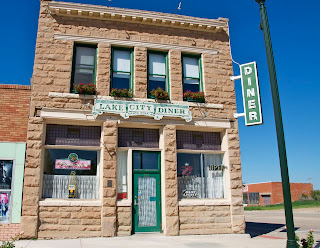 The Lake City Diner was formerly a bank--established in 1901. Bobbie and I learned this at dinner last night, when we stopped there to pick up take-out. Inside, the floors are a combination of octagon shaped black and white tiles--which was the part of the floor where customers walked--and the hardwood floor, which was behind the bank counter. The current bar is part of the old marble-fronted and marble-top bank counter. There is an elaborate pressed tin wainscoting around the building and on the ceiling. The door to the original bank safe is still there, but now leads into the kitchen after the safe itself was removed. 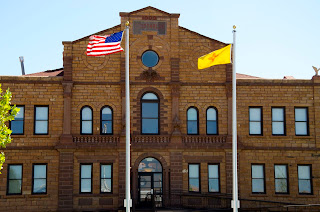 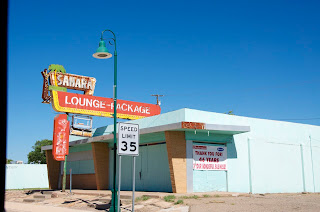 This is a common site in Santa Rosa now. There were numerous empty buildings from the heyday of Route 66. There is little left on the historic route, with most of the businesses located out next to the Interstate-40. It seems to be mostly a service town now, with primarily motels, a few newer hotels (the ones near I-40) and restaurants. 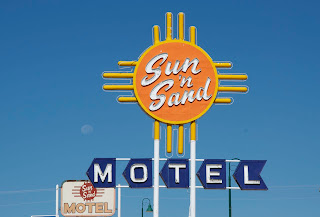 The Sun 'n Sand is still open as were a few other of the original 66 motels. 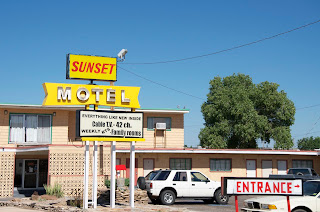 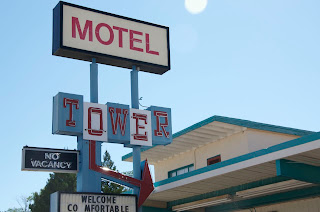 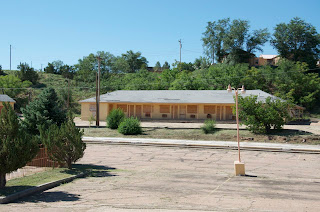 This is one that did not survive, however.
Several hours later, we made a late lunch stop in Antonito, Colorado. We had a side-walk table so Kate could join us. The weather was cool finally, and a breeze just prior to the rain (in which we drove the rest of the way to our stop in Montrose) made it more enjoyable as well. 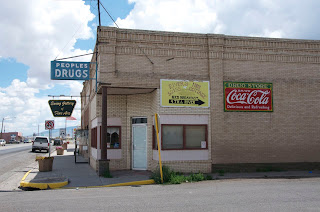 There seems to be little there except for a couple of tourist things (the Cumbres & Toltrec train that runs to Chama, for one) and several bars, taverns, or lounges. The drug store is closed and for sale. 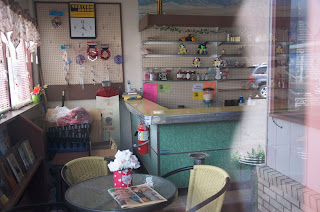 A peek through the window was like going back to my childhood. 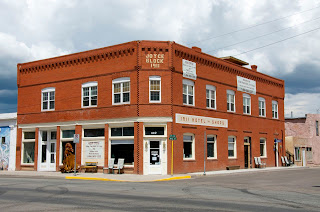 This hotel, circa 1911, is currently operating as a tourist hotel for folks coming to ride the train over to Chama. 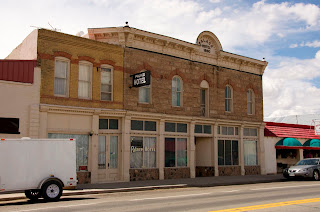 The now-closed Palace Hotel, established in 1890. 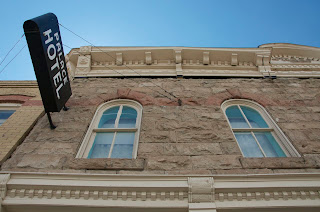 A long and winding drive through the mountains and we finally arrived in Montrose later than anticipated--but that is another story. We just selected this spot as Randy had wanted to be near Silverton and Ouray, and there were no places in those two areas where we could find lodgings accepting a dog of Kate's size. It seems as if Montrose's draw is the Black Canyon State Park and people who are interested in camping and fishing. We unloaded in the pouring rain and called it an early night again, and really ready for a relaxing day tomorrow.
Posted by Suzassippi at 11:33 PM