October is the rainiest month, not April 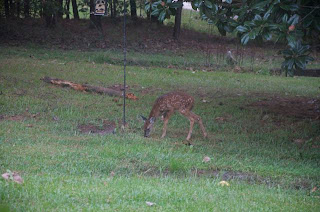 It has been another week of non-stop raining--the pouring, the blinding, the drizzle, the sprinkle, the off-and-on, the light mist, the deluge--you name the type, and we have seen it this week. Some thunderstorms and wind, so limbs are lying all over the place. My yard is the sponge again, but at full absorption, so no more room left to absorb. The water runs out of the hill constantly and I sink about two inches with each step down to fill the bird feeders. It is raining again right now, and I am watching it bounce off the flowers just outside my window. 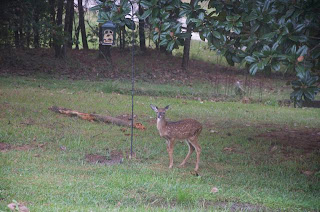 Earlier in the week, Rex's "there's a deer in the front yard" bark sent me to the window. This is our first glimpse of the little guy who arrived in our woods this past season. The following day, he was out with his mother, snacking on the corn. I feed them, hoping it will keep them from knocking over the feeders to spill the seed. It has had limited success.
Last evening as I sat on the porch for a glass of wine, two deer were arguing over the feed. It was interesting to see them interacting. One was slightly larger and was nibbling on the corn when the second one wandered over They usually share and it is not uncommon to see 3 of them out there. I always put out two piles of food to help accommodate my dinner guests. For some reason, the larger one decided it was all his or hers, and would run the other deer off by charging it when it approached the second pile of food. (Led me to surmise they were both male, though there were no obvious antler buds, like on my little buck who has also been visiting regularly this fall.)
On a related note, apparently the deer population is out of control in the city, and they passed an ordinance to allow people to shoot deer in the city limits. That created quite an uproar (as it should have) as people were visualizing folks roaming around like some kind of deer vigilante committee, shooting deer next to where your children might be playing. What were those folks thinking? The council defended itself by saying it did not intend it to be "open hunting" where anyone could shoot a deer anywhere, but that just wasn't very clear. I should use that as a policy analysis in my Policy class when we discuss "unintended consequences" of policy decisions.
Posted by Suzassippi at 9:59 AM