A Taste of Soul

Welcome to the 1st Annual University of Mississippi-DeSoto Center Student Social Work Organization "Taste of Soul and Black History Symposium" presentation!  I arrived at the DeSoto Center in Southhaven at 5:30, but wished I had gotten there sooner!  The greens were gone as were the field peas!  (Now I personally would have made hot water cornbread had I been asked--a soul food my mama--though not a soul woman--was making since I can remember, on account of we were poor and did not always have milk.)
The students and DeSoto faculty had contributed soul food items and for a mere $3, you could fill your plate.  While I missed the greens and field peas--two of my favorites--I did have some several items from the selection, including neckbones, cabbage, and potatoes, which I have never had before.  I am always up for trying something new--I recall Jeanne and I trying ostrich neck stew in South Africa, for example.  Though there were a variety of desserts, when she said "sweet potato pie" that was all I needed to hear. 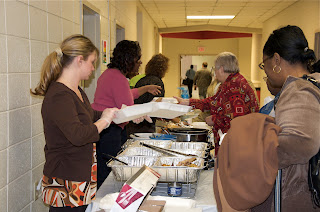 The students had put together displays of African American people who were instrumental in the development of social work--and this was not in regard to a required class, but on their own time and the only "payoff" was what they experienced.  It was not for a class grade.  They had posters around the room with information on various black people who have contributed to the profession, to the race, and to the world in regard to what they have given to all of us. 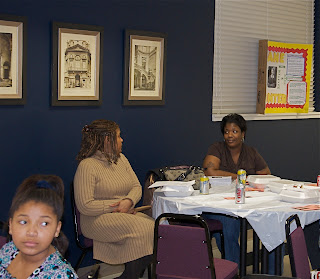 There were guests in the crowd, and it was really gratifying to see them range from 3 months to over 80 years.  Imagine the wealth of information and experience, combined with the promise of tomorrow that we shared in that room tonight!  There were several school age children present as well. 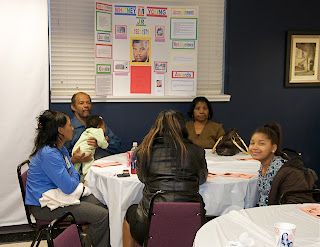 Dr. Jerry Watson, the newest addition to the faculty at Ole Miss was instrumental in spearheading this symposium.   Dr. Watson brings a wealth of experience as a community organizer and urban researcher to the program.  I think it especially wonderful he is at the DeSoto Center since Southhaven is the fastest growing metropolitan area in the region, and given its immediate proximity to Memphis, and Dr. Watson's experience in Chicago and then Jackson, MS, he brings a much needed element to the students' experiences. 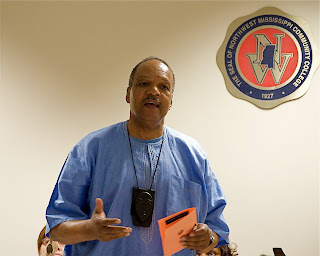 There were 4 speakers among the students, but I was especially impressed with this woman, who talked about the lifetime achievements of Whitney M. Young, Jr.  I admire the contributions of E. Franklin Frazier, and Whitney Young, and learned new information about Lugenia Burns Hope--a woman from Georgia known as the "Southern Reformer."  But, I must confess, I hold a special fondness for the work done by Whitney Young, and wonder if he might have preceded President Obama had he lived.  He had the gift of being able to communicate, as does Mr. Obama, and in fact, Mr. Young was comfortably at home with Presidents Kennedy and Johnson. 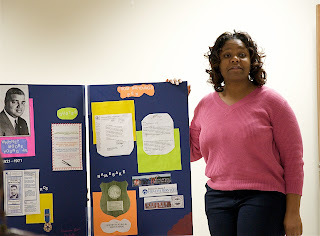 Special recognition was offered to this woman, and I was delighted to meet her afterwards.  She is the mother of someone whom I admire very much. 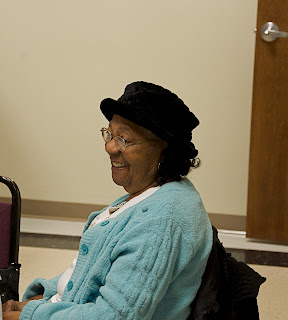 And in conclusion, Dr. Watson drummed and sang for us: an African "New Year's Song" (which I cannot get to post, so will upload the Smilebox of the video of his drumming).  I left DeSoto feeling rejuvenated, uplifted, and once again, proud of my profession, my colleagues and future colleagues, and grateful for the courageous individuals who have gone before us and made this world a better place for all of us.
Posted by Suzassippi at 9:51 PM

What a wonderful occasion and such an opportunity to acknowledge the many who have gone before us in this work. Wish I'd been there to be inspired and rejuvenated myself!