South side of the island

I finally felt better this afternoon and after a Coca Cola, rented a golf cart to at least get out a bit.  It was cool and overcast, so a nice day for riding around.  It took about an hour to get the cart, so I now have it til 4 pm tomorrow.  I headed south of town as the last time I was out there, I did not have my camera since we initially went only to make a home visit.
This is the remains of the medical university, but they are in the process of tearing down the building as it has been closed for quite some while.

These were originally the quarters for the doctors in the medical school.  They have been renovated and are now part of a resort. 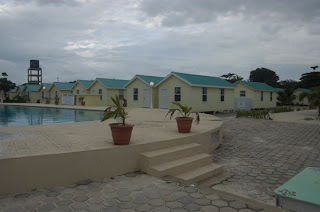 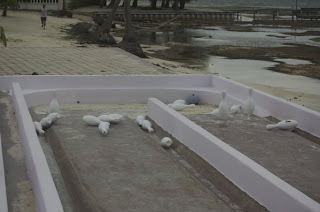 The tiny buildings to the right of the trees are the town of San Pedro.  That's how far south of town I was.  Mostly all that is out south is the new development of condos and resorts. 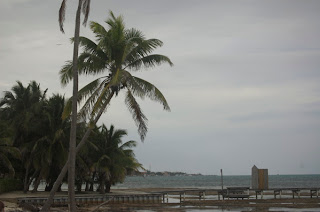 The gulls mistook the swimming pool for the ocean, and it was hilarious watching them skim it looking for food.  This guy settled in and took a bath in the pool. 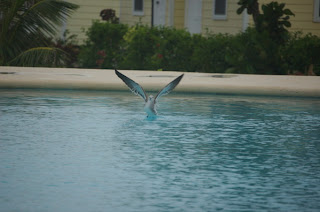 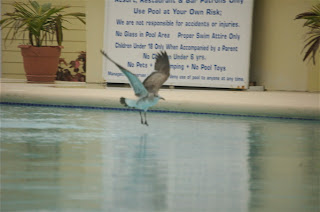 I was at the Sandpiper, and decided to chance a margarita.  They make it here with fresh lime juice and tequila only, and just a tad of salt.  Now I thought for medicinal purposes that a little salt would be good for me, not to mention the fresh lime juice is supposed to be good for you.  Just in case I had any lingering bacteria, I thought the tequila would be helpful.  It was a most delicious margarita and I had no ill effects, so apparently I was correct in my medical assessment.
I tooled back to town on my cart, and by then all the laborers and other workers were getting off, so the roads were crowded with bicycles as well as carts and taxis and pedestrians.  No problem as I am now learning my way around quite well.  It was beginning to sprinkle just a little, but not much.
Kim was just finishing loading some pictures onto her blog as she had been busy writing this afternoon while she was recuperating.
I am about to go find something to eat and then try to get to bed early.  I think I want some nice bland fish as the capillini pomodoro still does not sound very good.  I am going to drop Kim at the school in the morning (assuming she will be able to go by then) and then head on to see the north side since we did not get very far on Saturday.  One thing for sure, I will NOT be eating salbutes at AkBul. :)  Angel (the guy who works here at the villa and is our go-to guy for everything) said he was pretty sure it would have been the salbutes, not the food at Estel's.  He said he totally trusts Estel's and after all, that was only huevos rancheros with fry jack.
Hopefully early to bed here tonight, and pray the dog decides to take a night off or else it starts to rain so he wants to be in his dog house!
Posted by Suzassippi at 6:05 PM

great pictures of birds coming in! I wonder if it is the same birds over and over, wouldn't they learn?

You would think so, wouldn't you? LOL It was so funny, though.