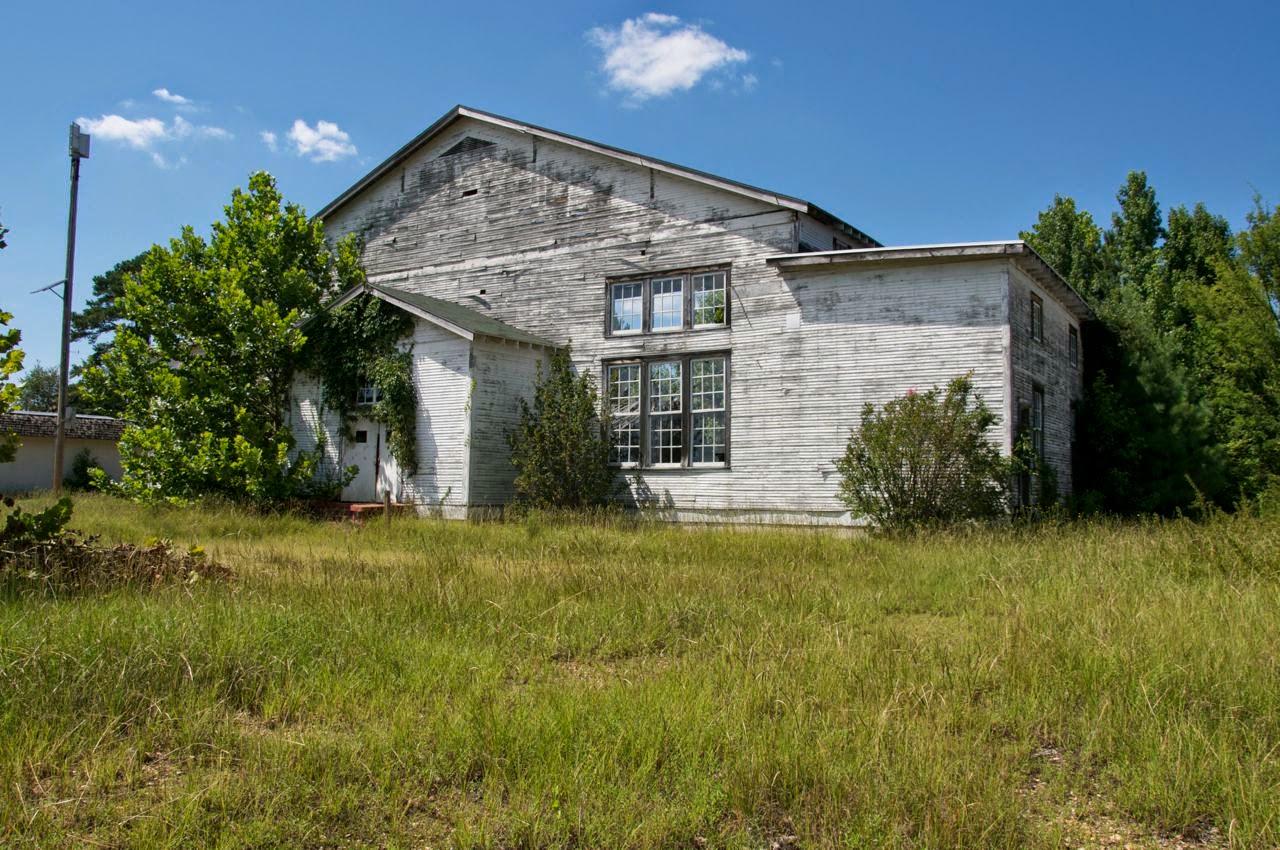 Oak Grove is a small African American community about 2 miles from Rosston, in Nevada County, Arkansas.  It has quite the history of significance in education for African Americans in Arkansas.

Few, if any, agencies of the New Deal directly affected as many African Americans during the Great Depression as did the WPA. (Gatewood, 2000, p. 126)

Arkansas benefitted, as did African American communities across the United States, with the appointment of Alfred Edgar Smith from Hot Springs, Arkansas as a member of President Roosevelt's so-called "black cabinet" (Gatewood).  Mr. Smith served as assistant and advisor to Harry Hopkins, with a particular focus to advise about the needs and concerns of African Americans in the deep South.  Being from Hot Springs gave Mr. Smith in depth knowledge of the needs of his home state, and a number of educational facilities were constructed across Arkansas--many which still stand and are in use today. 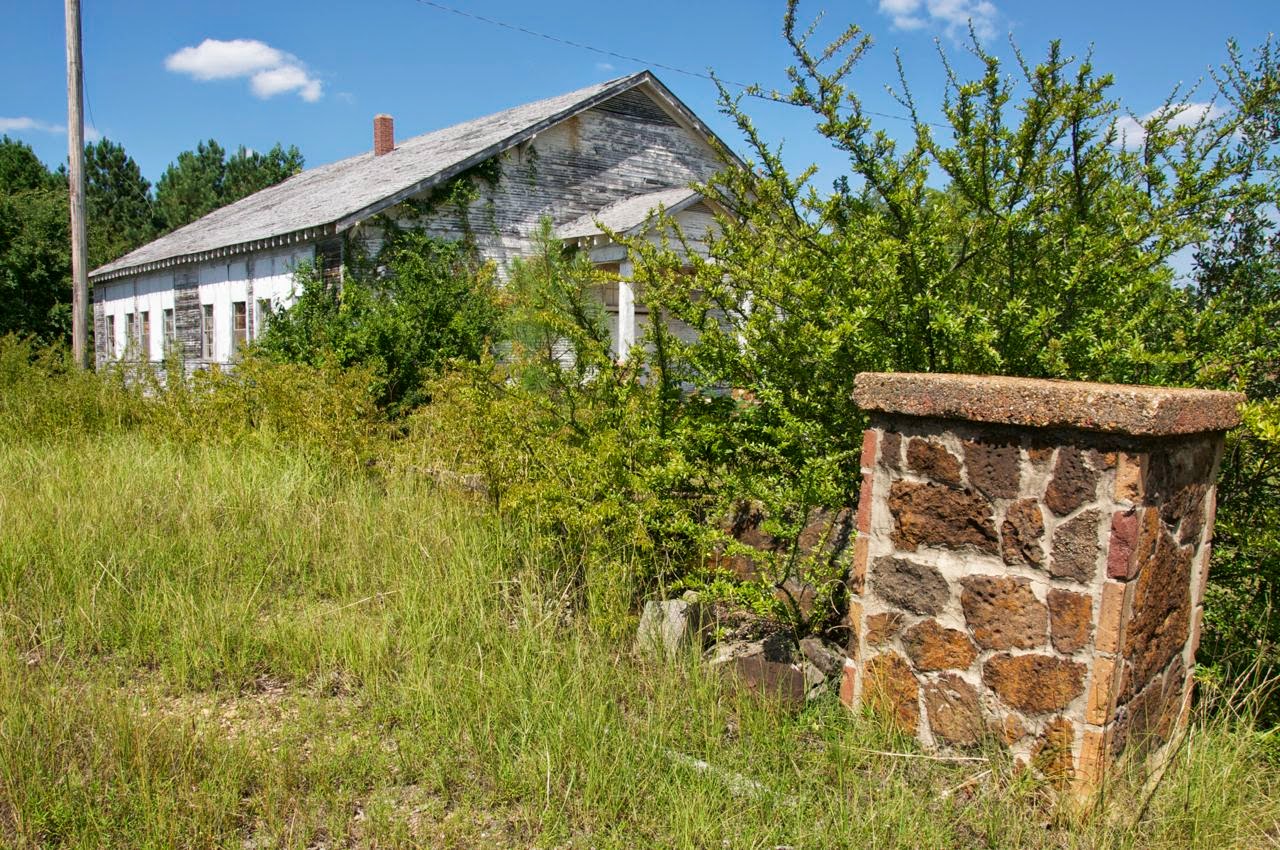 In addition to the large gymnasium, the cafeteria/home economics building remains.  Both were constructed with funds and labor from the Works Progress Administration.  I would not have known the purpose of the home ec building had not a couple who lived across the street come out to visit with me.  While she was not from the community, he had lived there his entire--though young--life and gone to school in the buildings.  One building from the three-building complex constructed with WPA funds has been demolished. 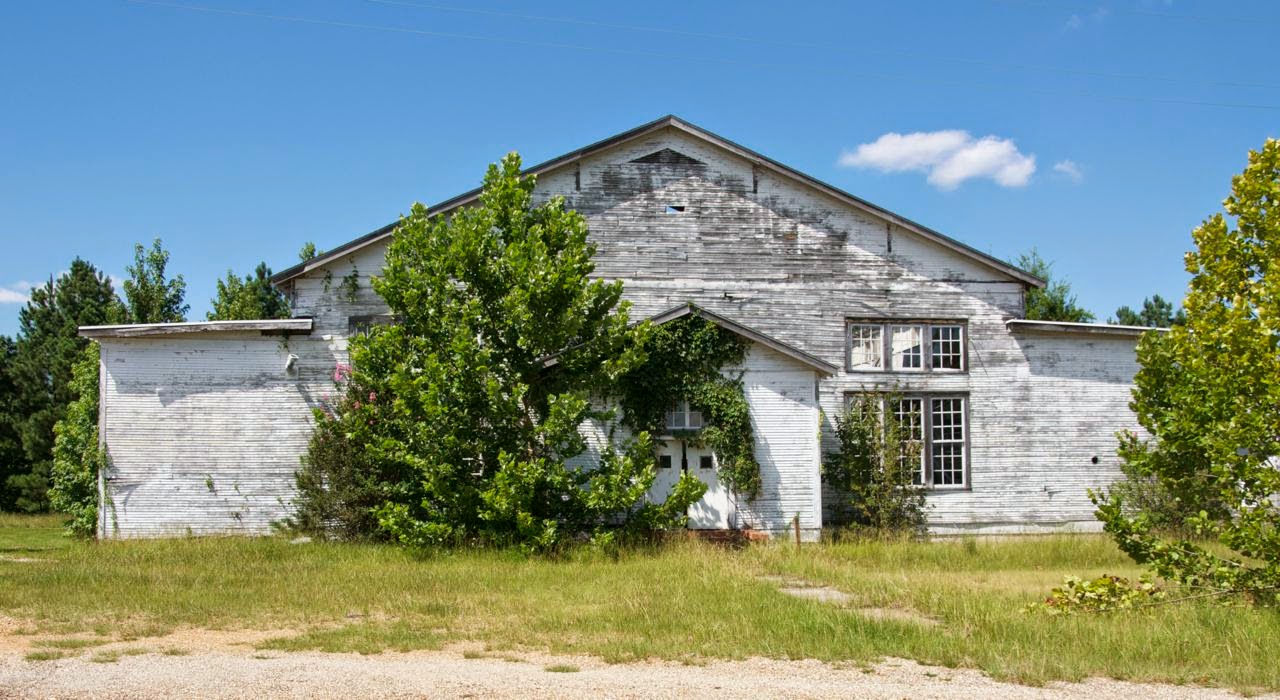 Two side sheds flanked the court area, and a stage was at the opposite end from the ticket booth in the entrance.  In 1990, the building and its interior were almost completely intact, and contained the original bleachers, columns, interior strip sheathing, stairwells, and ticket window, all "preserved and in good condition" (Story).

Sadly, that is no longer the case.  The roof collapsed at some point since 1990, and the interior is now significantly damaged.  Additionally, people have stolen items and artifacts from the building according to the couple across the street.  He stated the building had a historic plaque, and one day some folks from Texas stopped and removed it from the wall as a "souvenir." 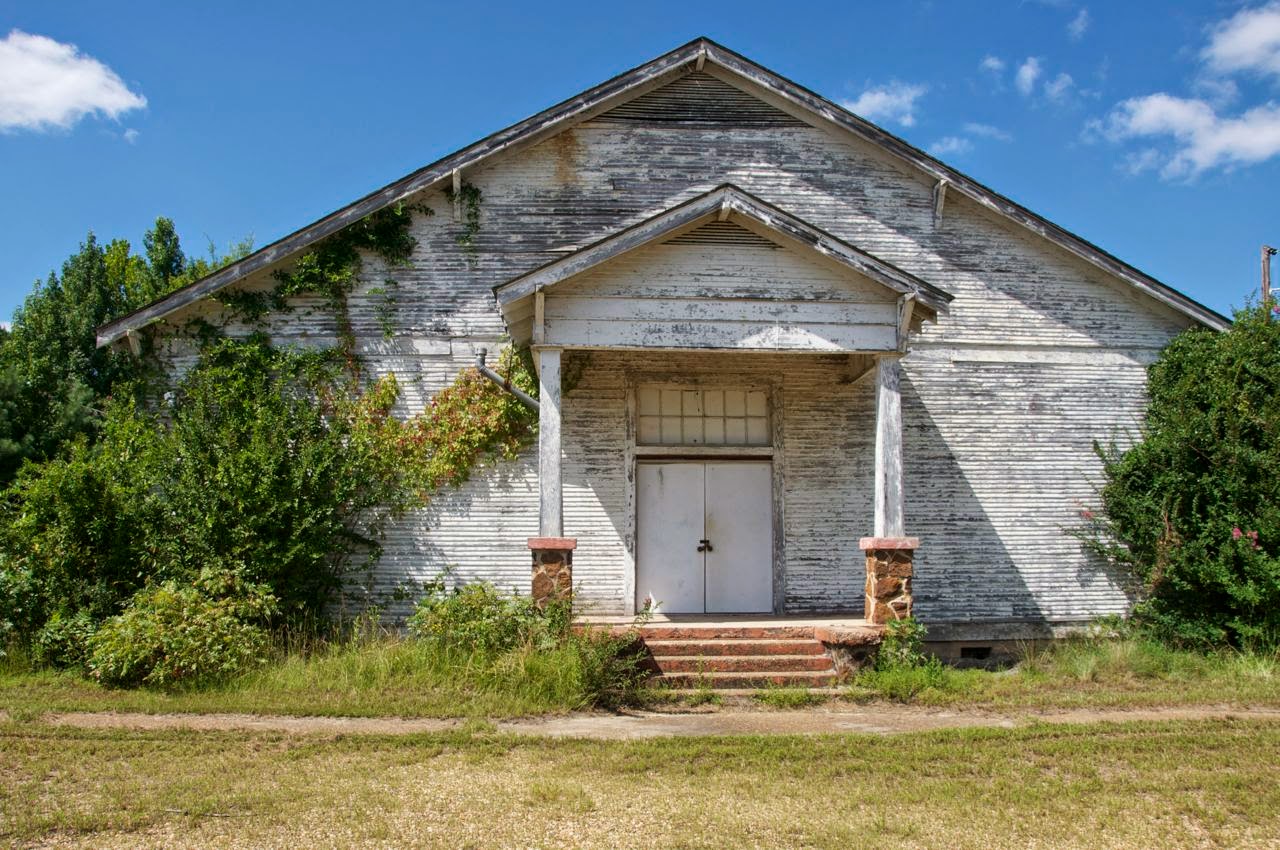 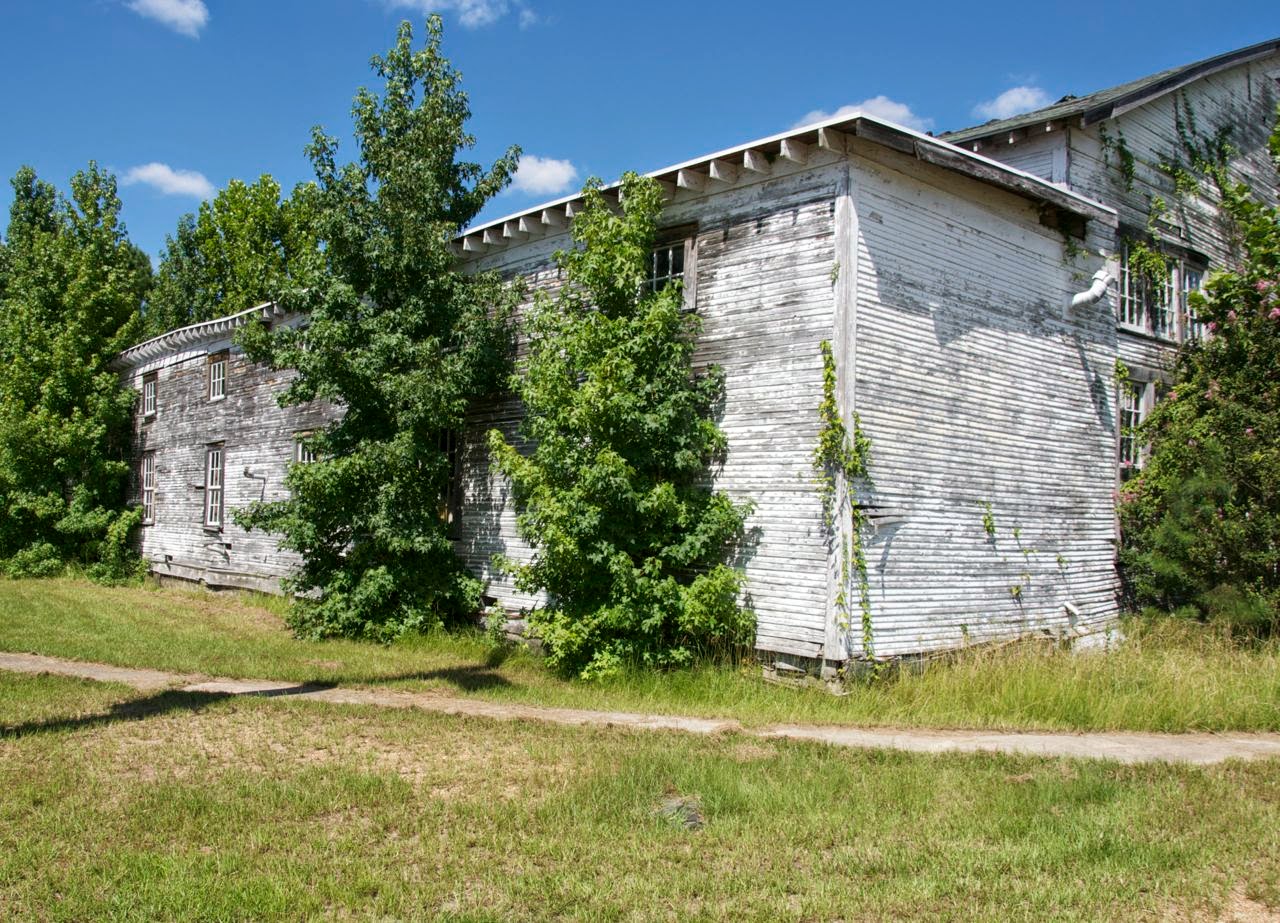 In 1935, L. W. Johnson became principal, and expanded the curriculum to include 12 grades.

It was at this time also that Johnson himself became aware that there was no gymnasium building locally which was available to blacks...Once again, with the aid of WPA labor, Johnson worked with county superintendent Basil Munn to obtain a new gymnasium for the students of the Oak Grove School District.

The building which resulted was not only a large and impressive structure; at the time, it was only the second gymnasium for blacks in the state of Arkansas and it was the largest gymnasium in the state...the Wortham Gymnasium...stood then as it does now for the endurance, hard work, and vision of the blacks in this area who dreamed on an independent opportunity to educate their own. (Story) 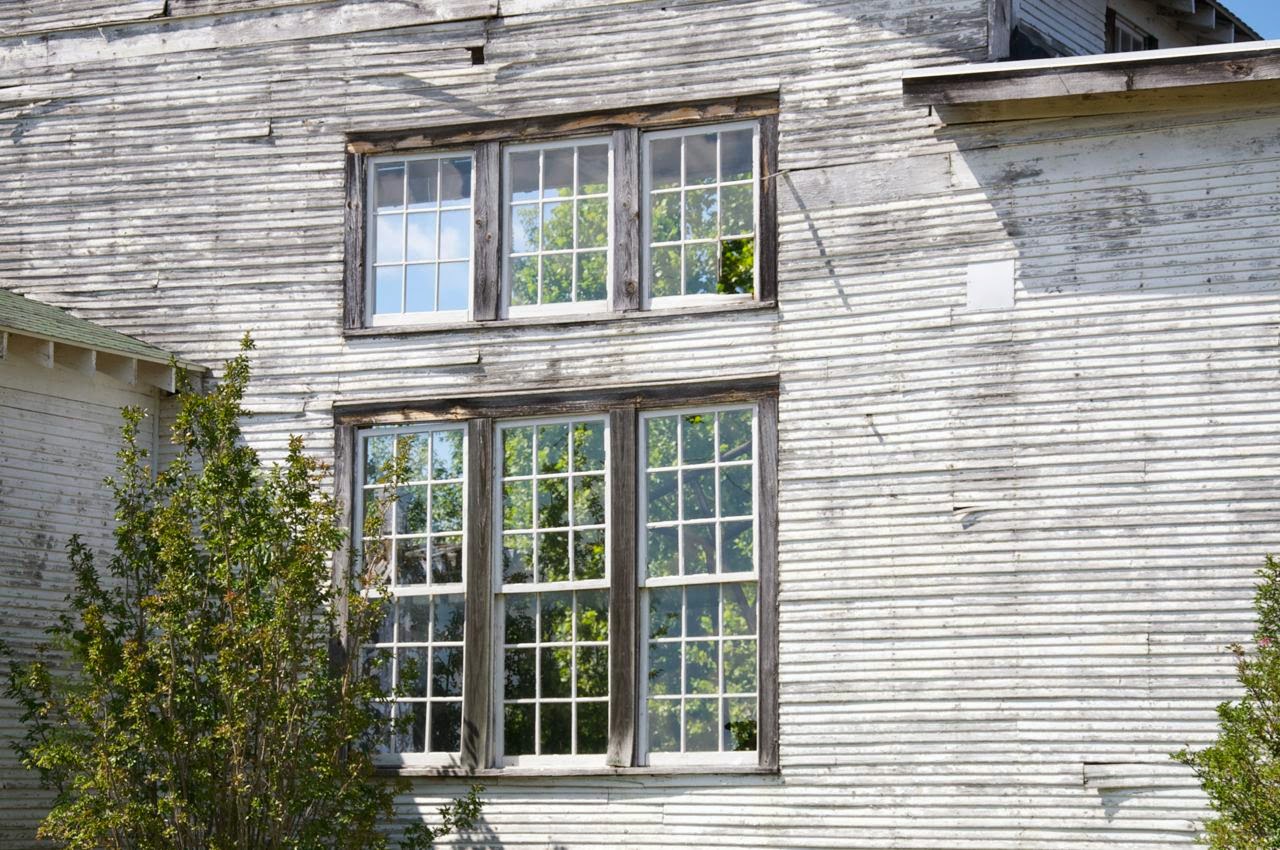 A professional basketball team--archrivals of the Harlem Globetrotters--played the A. M. & N. team from Pine Bluff.  The New York Renaissance Big Five, or the RENS as they were known, played the team in the Oak Grove gymnasium rather than in the college gym in Pine Bluff (Gatewood). 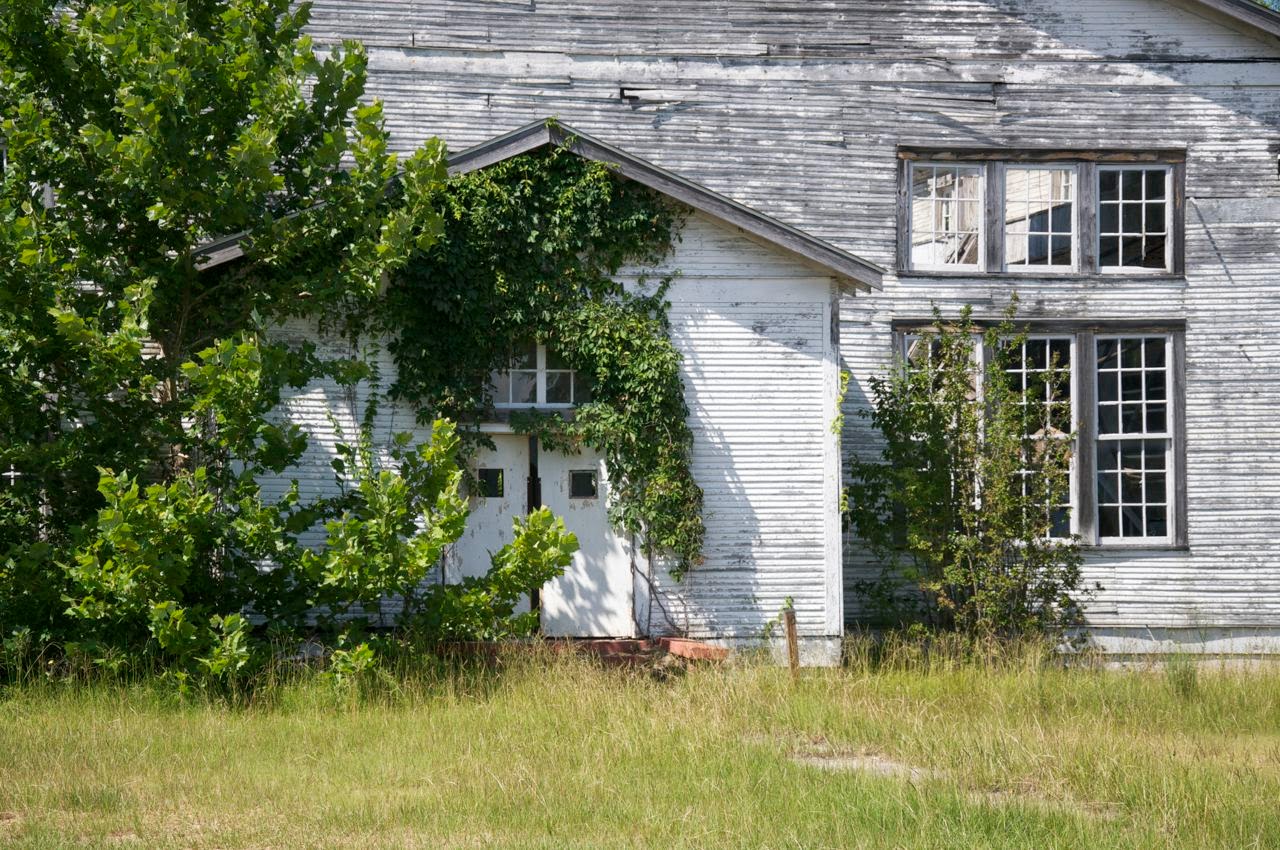 Construction of the gym began in 1938 and was completed by 1939.  It was named in honor of Roger Q. Wortham, Nevada County Judge from 1929-1935, and a supporter of Oak Grove's educational program (Smith & Joshua, 2003). While it was second in the state, it was the first high school gymnasium for black students in Arkansas.

The WPA granted $8,954 for the gym construction and the school district provided $3,680.  Local resident C. C. Bazzelle provided a portion of the lumber for the gym from his stand of "school trees" (Gatewood, p. 128).

The Oak Grove Civic League received a $10,000 preservation grant in 1998 to restore the gym.  It is unknown as to why the project was discontinued, and the League has been discontinued since at least the early part of the 2000s.
Sources:  Gatewood, W. B. (2000). Wortham Gymnasium.  In M. K. Christ and C. H. Slater (eds) Sentinels of History: Reflections on Arkansas Properties on the National Register of Historic Places.  Fayetteville, AR: University of Arkansas Press.

Story, K. (1990). Nomination form for Wortham Gymnasium for the National Register of Historic Places.  Retrieved from Arkansas Historic Preservation Project.
Posted by Suzassippi at 11:49 AM

The gymnasium at my Dad's school, Montpelier School - now West Clay Elementary in Montpelier, MS looked a lot like that. When the school swapped over to being a elementary school only and a new high school was built up the road the gym was allowed to go down. It finally fell in a few years ago. So very sad. A lot of good high school basketball was played there - West Clay County loved their basketball they didn't even have a football team. Never did!

I am proud to say that I was a part of this history in the late 80's before the school consolidated. It would be so awesome if the building could be restored at Oak Grove.

My Mom,dad,aunt's ,uncle,and cousins went to Oak Grove. Rich in African American history. I wish the community could get together and restore it back to it's original beauty.

It would be wonderful, but it is difficult for small communities to accomplish such an undertaking. Sadly, the demise of many of our important historical communities continues.

The gymnasium was definitely the center of the Oak Grove community. Basketball played a huge role in keeping family and friends together. It's unfortunate that future generations will not get to experience the pure elation of what the building, and surrounding buildings, once provided. There are plans in the works now for erecting a community center. So stay tuned.

Please do keep us posted by making a comment here. I do not normally moderate comments, but on older posts I do, just so I can keep up with new visitors with a notification of a new comment. I will look forward to hearing what is going to happen. My visit to Oak Grove was enjoyable!

I am honored to have watched many of my family members and friends play at this gymnasium. My father even played basket ball here. It educated many members of my family including my parents. I lived right up the know and knows personally who the " lady across the street" was. It breaks my heart to see its condition as it is a community legacy. My grandfather Clyde Evans always told me that the trees were there to maintain the timber needs of the school. Awesome article and thanks for sharing some additional historic facts that I was not aware of!

Thank you, Ms Evans for adding to the story, and I appreciate that you enjoyed it.

It is very distressing that so many important historic buildings and communities have deteriorated, frequently due to lack of adequate funding. In some cases, even when funding is obtained to renovate and restore, without the potential for ongoing resources for maintenance, the cycle repeats itself. I dread the day when all of our memories of beloved institutions and communities and buildings like Oak Grove and Wortham gymnasium are just "virtual" in some type of technology that may no longer even be accessible to many of us.

It is one of the reasons that the Living New Deal project (livingnewdeal.org) from University of California-Berkeley has volunteers like me who will seek out these communities and buildings built by the New Deal Administration programs like PWA, WPA, and others in order to document them and research the known information. And on a more personal level, I always enjoy the opportunities it brings for me to talk with members of the community when I am standing in the street photographing a building and they might wonder why and come out to find out. And when it really peaks someone's interest, and you all contact me with a comment or direct email, it becomes even more important. There is also a link on the livingnewdeal.org site that requests stories related to your memories of a building or project in your community built by a New Deal agency. My own father was a boy of 11 when the PWA built a gymnasium in the small Texas town in which he was born and raised, and his father worked transporting workers in his Model T pick-up to build the school in the near by community.

I am glad i attended this school i never knew the history but it instilled greatness into my life and many before me i started head start in 1979 and i have some of my happiest days in life started with this school my first time seeing a real basketball game inside this gymnasium.

Thank you, Mr. Martin for commenting and adding to this story. I have been surprised at all the comments of late, but it is always interesting to me to hear different perspectives. I heard privately via email earlier from someone that this history is not all the history, and may not even represent the memories of the community.

I agree--there is no way to accurately portray what a building in a community means to the community, except through the eyes of the community. The rest of us just have to rely on the research that is available.

In my opinion, that is what our schools should do: instill greatness into our lives.