I arrived "home" in Mississippi from "home" in Texas last Monday night, considerably worse for wear and tear.  I always book an aisle seat, with my left leg to the aisle because of the difficulty sitting with the knee bent at angles required when flying while ensconced in a tiny little shoebox of seat.  I had signed up for pre-boarding, and was standing there looking stupidly at the seat and my boarding pass when the flight attendant came up to ask if I needed assistance.  Yes; they have reassigned my seat and I am now in a middle seat and I cannot do that.  Turns out, yes I can--in pain and very uncomfortably sitting on the front edge of my seat so I could lean back and stretch my leg as far as possible, but I did it.  I will just leave it at that, and pay more attention next time when the desk agent says "I am moving you closer to the front" to also ensure she has kept my aisle seat, which is the issue more than having to walk 3 more rows to the back of the plane.

The rest of the week was insanely busy, and I spent every day and night "just doing the next thing due" which is a philosophy I adopted some while ago.  Priority: what is due next, which is more important, what can be postponed, and how well does it have to be done to pass?  I ended my week with a Friday trip to Tupelo to present at the Families and Communities Together Conference.  I had been asked to speak about poverty issues.  We all know about poverty in Mississippi, and the numbers and impact on our children and families.  I had recently located some new research that looked at the effect of poverty on children's mental, emotional, and behavioral health, very solidly based in empirical evidence, so I decided to tackle it from that direction.  One of the major issues is that we address poverty by trying to mediate the effects of it, child by child, family by family, as opposed to a strategy to reduce poverty, and thus, its effects.  At some point, one would hope we could get the idea that all of us are better off if we do not have folks living in high poverty and that we could generate the political will to determine to change that.

I did not think many people would attend (after all, who wants to talk about poverty--it does not make splashy headlines like violence, abuse, and drugs, which by the way, are often co-factors of poverty), so I made 8 copies of handouts...and the room was filled.  Two of my graduate students were there, and three former undergraduate students as well, and the sister of a former student who came up to introduce herself to me and thank me for what I had done for her sister.  That made it extra rewarding to talk about something near to my heart: reframing the concept of child welfare to include community welfare, that is, nurturing and safe communities where people can get their needs met, and implement broad strategies that reduce poverty and blighted communities.  Critical studies have shown that reducing poverty and increasing income leads to better outcomes for children and families, regardless of any other factors.

On the way home, I stopped off at Pontotoc and two other nearby rural communities to get some photographs of New Deal buildings.  Now truly, that was a fitting end to a day spent talking about poverty and the effects on children, which means, the effects on communities.  Mississippi is dead last out of 50 states (and District of Columbia, so in reality, last out of 51) in terms of poverty rates (35%), persistent poverty (no change over the last 40 years), and no access to health care.  Only 3 states have as bad a record: our neighbors Arkansas and Louisiana, which share all the same demographics and legacy as Mississippi.

Among the many public buildings constructed under New Deal administration were schools, rural schools, and teachers' houses.  I thought I had located two teacher's houses in Pontotoc a few weeks ago.  Reviewing the National Youth Administration Work Projects Photograph Album, 1937-1939, I discovered I was right.  The digital archive from Mississippi Department of Archives and History includes several photographs of nearby projects, and a picture of one of the houses post-completion was included.

The stone for this stone veneer house was quarried from Tishomingo County, at the National Youth Administration quarry.  The NYA was a program implemented to accomplish two goals: keep youth in school, including school beyond high school by providing a stipend that would enable them to do so rather than drop out, and provide useful vocational training skills that would enable them to be able to work.  NYA completed numerous projects in Mississippi, including construction and furniture making among others. 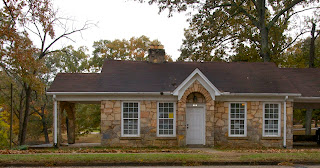 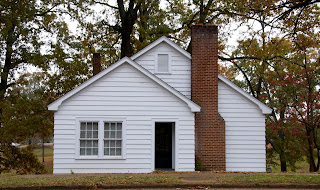 I will hazard a guess that the stone house went to a teacher with more seniority.  The stone house has a covered porch/patio area that was part of the original construction; the carport to the right was added later.  Part of the house with the wood siding is visible in the original photograph of the stone veneer house, but it is only the rear of the house, so impossible to tell if alterations have been made to it.

Countries that have made serious strides in reducing or eliminating poverty include those that recognize education and health as the best macro level prevention.  Eliminating the high gaps between the richest 20% and the poorest 20%--which produces better outcomes for all of us, demands both quality education that is accessible and affordable, and quality health care that is accessible and affordable.  The US is in the bracket with 4 other countries who have the highest gaps between those two.  In a country in which the standard of living has continued to increase in the last 50 years, but the poverty level has remained the same, surely we can do better than this.

I have to agree that reducing poverty and increasing income is the answer, a very sensible answer. But the fear of education is another obstacle. Parents don't value the importance of acquiring knowledge. I've long been a strong proponent of showing children the value of school and making them feel a sense of accomplishment. Interesting post, wish I could have attended your presentation!

I grew up in Clay County in a very rural part of the county and thought I understood poverty. Then I got married and moved to Noxubee County. There's very little to do there. I drive 30 minutes one way to work and was driving 45 minutes one way. My husband is an over the road truck driver as are many of his friends. I've seen two plants shut down since I've lived here the past 7 years and it's amazing how people even make a living. The school system is abysmal and if you can afford it you send your child to private school. Sad but true. I hope when the Kemper County coal mine and the new Yokohama tire plant open in West Point this will give some of our people a better place to work but that's still several years away. Education is so important and with basically free tuition available to EMCC it's a shame that more do not take advantage of that instead of the government. At least it's a beautiful place to live and the people are great.