It's been a long day's night...journey to the center of the earth...and the plans of mice and men...

Not much has gone according to plan or schedule this week, and I suppose one good thing about having been a social worker for so much of my life (almost half of it) is I have learned to be flexible, and that one cannot control other people and their choices.  And at this point in mine, I find I generally don't even want to do so, but it is amazing to me how many folks are out there who think we should just "make" someone do something because it might be in his or her best interests....and at the same time, resist any efforts to change the things in her or his own life that are just as problematic.  But, that sort of questioning doesn't get us much of anyplace--best answer is one I learned back in the 1970s: "People do what they do, and don't do what they don't do." 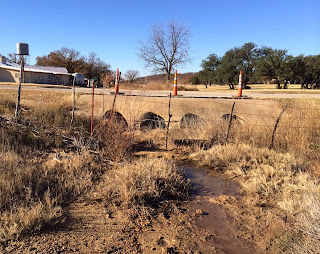 It was a fairly sleepless night around here last night, so when it quieted down at 7 this morning, I napped on the couch in the den until the caregiver arrived at 10...which meant Rio and Jenny waited for breakfast for a while this morning.  I had gone out at 6:30 but it was below freezing and they were still in the barn.  After feeding and forking hay, I walked over to the fence row where Sis had mentioned a t-post in the creek rusting out that needed to be replaced.  I wanted to check it and see if it was an immediate need, or could wait for two more weeks when I am really on "break" and don't have work to do in the few minutes each day when I have a few free moments. 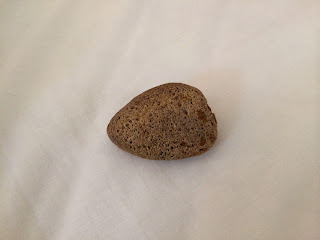 I noted a stone in the creek bed, worn to rounded edges from the water, and pitted from the salt in the rockbed around the creek.  I love river rocks, which are worn smooth from the running water, and have a few prime specimens.  For some reason, I felt compelled to pick up this little stone, and add it to my collection.  While I had always sort of entertained the idea that I would come back here to this place at some point in retirement, more and more, I don't see that happening, for a lot of reasons. 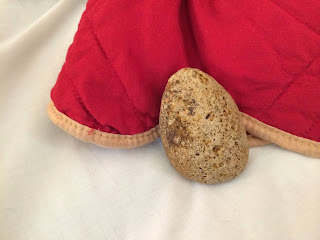 My grandmother loved rocks, and collected them over the years--whether a sandstone from the pasture behind her house, or a petrified piece of wood Dad dug up at the gravel plant and brought to her, or anything in between in the few travels she ever made.  She used them for borders for her flower beds, and most of them were still there on my last visit to the house.  While on the one hand, I find as I age that I am less interested in keeping up with things I have to haul around, or take care of, a little rock that would fit in my pocket doesn't seem like a great deal of effort. 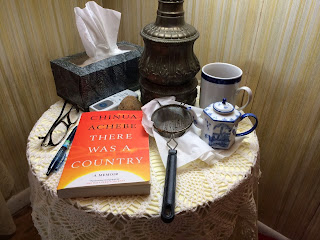 On my last trip here, when Dad was in the hospital, I had commented to my sister that "someday" I wanted the teapot I brought Mother from Amsterdam, and not to let it get away in the frenzy of Mom deciding to get rid of a lot of things to make it easier to take care of things around here.  She had collected miniature tea sets, and even a few toy tea sets, so I brought her this little teapot on one of my trips to South Africa.

I decided this morning to make tea in it--I bought some loose leaf Earl Grey while in the Metroplex on our way down Sunday, and it just felt like today was a good day to use this teapot that still had the lid taped on.  I had some work to do, so once Cam arrived to take over at 10, I brewed a pot and retreated to my room...where I discovered that the tiny little spout on this teapot clogs with the long leaf tea, and when I went to pour it, whilst dripping out, dripped all over my book, the table top, my notes for an article...I guess this teapot is one that will be best used with a teabag.

So, once again, it is almost noon, and I have accomplished nothing that I intended this morning, and while I am really good with chilling out and rolling with the flow, it does not get me closer to the conclusion and final edit of the paper that is due for submission by Friday, and especially when tomorrow is Thanksgiving and I will be somewhat busy, and Friday, I will cover from 7-3 by myself.

However, once Rand gets here at 3 or thereabouts, the evening shift takes over and we are headed back toward Mississippi, having decided to travel part way Friday rather than do the whole 12 hour trip on Saturday.  Small gifts for times when small things matter...a lot.
Posted by Suzassippi at 11:54 AM