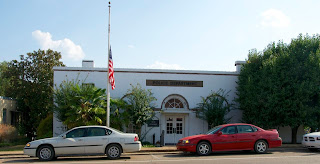 The former post office building in Philadelphia was one of the 32 Mississippi post offices built under the New Deal Administration of Franklin Delano Roosevelt.  The Mediterranean influenced "loosely Classical Revival" building was completed in 1936 (Mississippi Department of Archives and History, Historic Resources Inventory database).  Builder was Walter L. Perry Construction Company, who was active in building New Deal projects across the state.  Our old friend, Supervising Architect of the Treasury, was the "architect."  Regular readers know about the Living New Deal project from the University of California-Berkeley and my part in helping to document projects in this part of the US.  Although I will say to this point--since I am always in a public location--I have experienced no difficulties in photographing the buildings that I am researching, there are sometimes interesting experiences that arise. 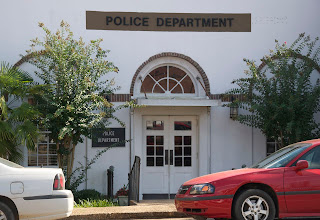 I guess in large part it is the post 9-ll paranoia, but show up some places with a camera and folks get curious.  I had photographed the building from across the street for several minutes, and only upon crossing over to photograph the cornerstone (that showed it was a former post office) did I arouse the interest of someone inside. 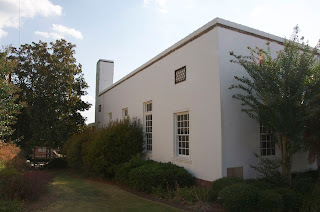 "Excuse me, what are you doing?"  I turned around to see a woman wearing her Police ID tag coming out of the double doors.  I explained the project, and my role in documenting New Deal buildings in Mississippi.

"New Deal?  What is that?"  I am always surprised by that, but it happens more than one might think.  I guess in part due to my age, and living with my parents and grandparents talk about the Great Depression, it seems shocking to me that people might not know.  Many of the benefits of the New Deal projects Administration are still in use today.  President Franklin Delano Roosevelt's New Deal Administration--like the Works Progress Administration--I used the terms most recognized by people.  I explained the former use of the building--she knew that--and pointed out the cornerstone that documented it had been one of the projects--she did not know that. 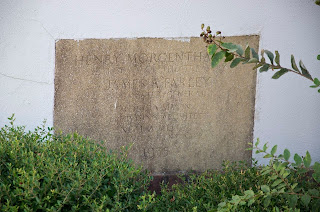 I know that many references to people's history have been surgically removed from textbooks--I am beginning to wonder if that now includes the history of the New Deal Administration, and the benefits--economic, social, and psychological--that it provided to a country in desperate need.

Posted by Suzassippi at 9:29 AM

I'm younger than you and I still know what the New Deal is! I'm always amazed how people cannot be interested in their history.

Yes, me, too. History is fascinating to me. I am happy to hear someone so young knows about the New Deal, too! Maybe I just have a penchant for running into these folks--most of them have been employees of the postal service and have no idea why those murals are in lobbies of the post office.

I've had similar experiences with explaining the New Deal. I know they can't teach every little detail of history, but the New Deal and the Depression were significant. I would like to know what is being taught in both high school and college American history classes. When I visited the Brackenridge golf course the nice young man that walked out to look at the little starter house didn't know what the New Deal was, but he did know the history of the layout of the course and that it was altered slightly when the freeway was built through it. He did have the wrong date for the construction, but that was okay because his parents were only teenagers then!