Hotel Aloft--like being on the Starship Enterprise 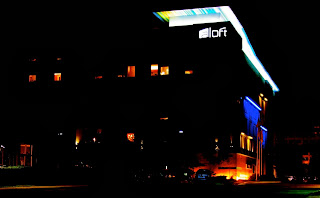 I have fallen in love with techno, modernism, futuristic--anything clean-lined and simple.  After years of loving shabby chic, country, French rustic, I want metal, wood, light, and bare essentials.  But for now, that's just "the impossible dream."  When I was looking for hotels in Franklin though, given our last minute decision to zip up there for the weekend (zip being a euphemism given we went up on the Natchez Trace at 50 mph after taking 2 hours to get to the Trace when it should have taken 45 minutes, and then taking 7 hours to get home on what should have been a 4.5 hour return, but hey, you need to stop and smell the roses on your 32nd anniversary), I was faced with a choice of a nondescript hotel/motel, or something pricier.  After 32 years of marriage, and this being the first mini-vacation/anniversary trip in 10 years, I think it was not that much of a choice.  While looking at my available options, I located this W Hotel, the ALoft.  The location was perfect, the reviews were good, it was available, and, I loved the decor. 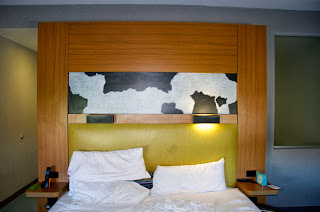 I realize that normally, one would take the photographs before you had slept in the bed, taken a shower, or had your items all over the place, but Rand just drew the line at cleaning the bathroom and making the bed this morning before we left.  He is so pragmatic that way: "I'm thinking you should have taken these pictures last night."  J is quite talented at building, though, and this headboard/nightstand/storage cubbies is quite similar to the one he designed and built for his room.  I plan to commission one for the master bedroom...albeit with something other than cowhide in the slot above the leather inset. 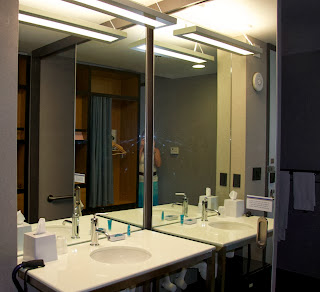 I loved the separate sink/toilet/shower area, but this is what first made me think I was on a starship.  The sliding pocket door--which I personally love for bathrooms, and maybe for all rooms, served double duty.  Behind the sink were handy little cubbies, racks for clothes, shelves for shoes or bags, etc.  It actually reminded me of European hotels which maximize space for storage. 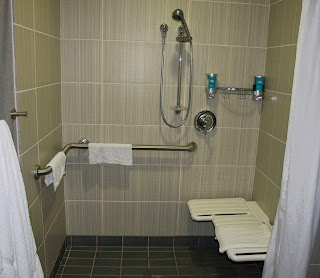 This is the shower with which I fell in love.  In my wildest dreams, I would have this shower in my house, my parents' house, and in the portable shower trailer that I would cart along behind me for any trip.  I would say the one thing they did not think about was that tile when wet is slippery, and with no  water dam/threshhold, even though there was a second drain, it meant quite a bit of water sloshing around the floor--probably not the best idea in the grand scheme of things.  I did love the seat, given that since my knee surgery, I need to sit to wash my feet and afterwards, to dry them, so kudos for that.  Except for the no grab bars/no barrier on the entrance, this is exactly the shower I "designed" for my parents' house.  I'm thinking a good alternative would be to slope that floor just a smidgen toward the center drain, and put a half wall next to the seat.  After all, safety first.