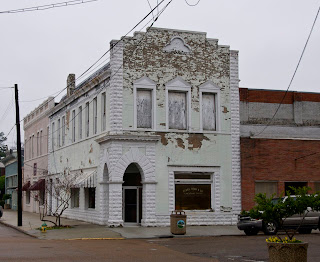 The old [old--as in first building] Bank of Leland was organized in 1899 with capital of $5,000, which increased to $34,000 within 5 years (Dot Turk, "The History and Architecture of Leland", Washington County Historical Society, 1981).  The building above was built in 1909 on Third and Broad.  The first floor was the bank, and the second floor served as offices for McGee & Dean & Company cotton office (Turk). 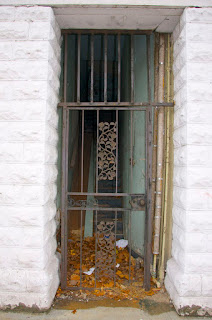 The side of the building featured a stairway to access the cotton offices. 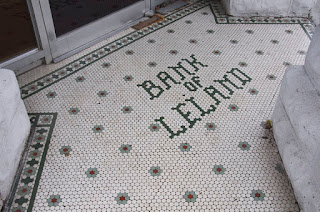 Even though the bank built a new building in 1926, across the street, the entrance tile still proclaims the Bank of Leland. 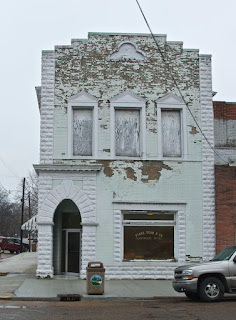 The building featured a corner entrance, which could be accessed from either side, and a stepped parapet roof.  The door opening into the building has been replaced at some point with a modern door.

The building serves as the offices for the McGee, Dean, & Company plantation office according to the current signage, and obviously needs some repair and paint.  The second floor does not appear to be in use, as windows are boarded and the stairway in inaccessible.
Posted by Suzassippi at 10:06 PM