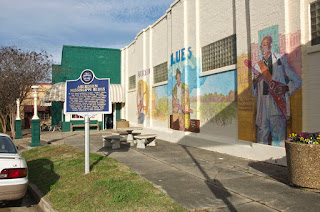 The Aberdeen Blues Trail marker honors Booker "Bukka" T. Washington White, who lived in Aberdeen during the 1920s and 1930s.  The mural, painted by Senatobia artist Cristen Barnard (Jeff Clark, Monroe Journal), also features Chester Arthur "Howlin' Wolf" Burnett and Albert King, who claimed Aberdeen as their birthplace (Bukkawhitefestival.com).  White was born in nearby Houston, and moved to Aberdeen.  While there, he became involved in a shooting and spent three years in Parchman, apparently remaining in the Delta for some time (Steve Cheseborough, 2009, Blues Traveling: The Holy Sites of the Delta Blues).  White was a cousin to B. B. King, even giving B. B. his first guitar (Bukkawhitefestival.com). 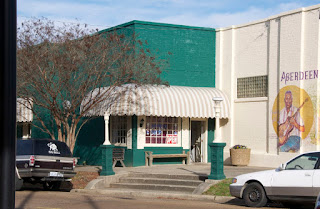 The blues mural is painted on the side of the 1940s Kroger grocery building, which is now home to Sherwin-Williams paint and a barbershop.  Plans are under way for the 2013 Bukka White Festival.
Posted by Suzassippi at 4:21 PM