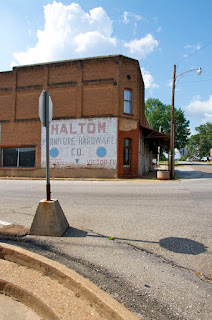 The Haltom Furniture and Hardware Company--apparently specializing in Whirlpool and Victor TV (was that pre-RCA Victor?) was located in a building constructed in 1900--along with much of downtown Lewisville, Arkansas when the railroad brought increased economic development.

The earliest record I can find for Haltom owning this building is a 1967 transfer deed to Leech Haltom.  In 1991, the building was transferred to Michael Haltom and after 1997, seems to have left the Haltoms for a series of owners. 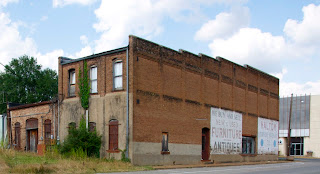 It was the rear of the building that first caught my attention.  Doors and windows and details: red details.  Rusted red shutters, rusted red bars on the windows, and painted doorways. 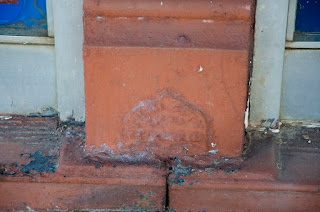 The metal columns on the front of the building have been painted over so many times that I could not say for certainty which company built them.  At first, it looked like Texas City, and there was an ironworks in Corsicana at one time.  Their products included castings for the building industry.  Closer looking makes the name look more like Pennsylvania, however, and there was an Erie City Iron in Pennsylvania, but no indication they made building parts.  Their products included engines.  Other guesses include Texarkana AR. 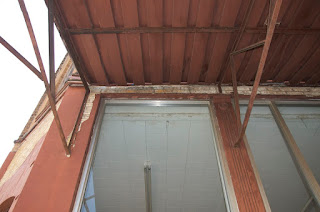 Sometime mid-century, Lewisville added metal canopies to most of the downtown buildings.  I assume that at about the same time, the front of this building was "modernized" with aluminum frame windows--and the interior with that asbestos ceiling tile and fluorescent ceiling tubes. 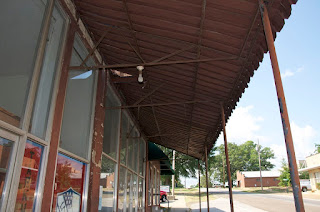 Even though the awnings are not original to most of the buildings, they have been there long enough that apparently they qualify for some type of historic significance on their own, just because they have been part of the landscape long enough.  Later, we'll spend a little more time at the back of this building, which I think is definitely it's best feature.
Posted by Suzassippi at 3:44 PM