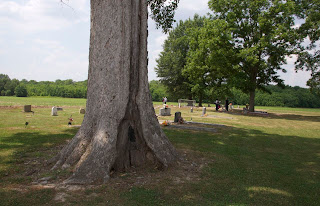 In a departure from historic buildings, this is more in line with my posts in the past: people and things that matter, and service projects.  We have been working with the Mound Bayou community for well over a year now.  Our most recent efforts involved mapping the cemeteries for the US GenWeb tombstone transcription project-an effort to make it easier to locate ancestors as well as preserve history.  One signs up to walk a cemetery that has yet to be mapped and transcribed, record the locations of graves and tombstone data, and submit the information to the online database. We originally set out to locate the cemetery for which we had signed up, and get an idea of its size and layout.  It was shady for the most part, and fairly cool at the time, so we went to work.  The process involves identifying all of the data on a tombstone or marker, primarily name, date of birth and death, and recording the location of the grave in the cemetery.  That way, someone could note the order of the gravesite and find it, rather than having to look at every single gravesite in the cemetery.  That is followed by taking a photograph of the tombstone in order to provide a secondary record of the data and a visual image for people who want to see the location/tombstone data for themselves. 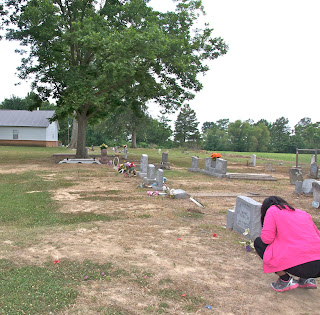 It did not take long for the pleasant breeze and shade to depart, leaving us in the midst of a soy bean field, learning about the Delta sun in May.  We were diligent in persevering, however.  It was not easy.  Time, water, sun, and wind take their toll on metal and stone.  Sometimes, it was impossible to ascertain information.  Sometimes we could take a photograph of a stone, and enlarge it enough to read, and other times, we squatted, knelt, or even ended up on all fours trying to decipher dates and names, all without stepping on, standing on, or walking on graves. 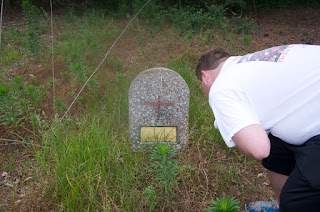 From my early childhood, I was admonished one does not stand on, walk on, or step on the actual gravesite.  I always thought it was as a sign of respect--and for me, it still is and I insisted no one could walk on, stand on, or step on the graves.  My friend told me, however (as did a woman who stopped by once and remarked she had been seeing us in the cemetery) that it is due to the fact that time and weather can cause graves to sink and the ground to give way around it. 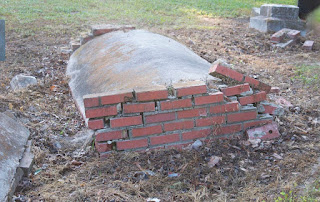 At times when the stone was so weathered, we were able to decipher by running our fingers over a stone in a sort of tombstone Braille.  One can also pour water on a stone to make letters more visible, but nothing else due to potential damage to the stone.  We swept off many flat markers to remove the dirt in order to be able to read the stone.  An additional difficulty we encountered was fire ant mounds on or near markers, and markers that had been broken and fallen face down with no wording visible.  That typically occurred in the historic cemetery, where graves were much older. 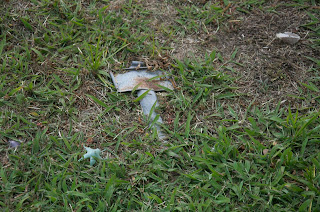 A sad and sobering occurrence far too often was the inability to identify who had been laid to rest.  Perhaps the family had been unable to afford a permanent marker, or perhaps there had been no surviving family.  A burial marker supplied by the funeral home only can last so long, though.  Older ones were stamped in the metal, but rust eventually takes over.  Newer ones are paper, with the information typed, and after a while, it succumbs to moisture, light, and heat. 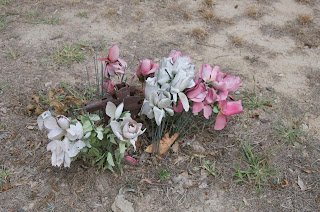 Even when the marker was gone, there were occasional indications that someone remembered who had been interred there.  That first night at dinner, and many times afterward, we discussed the emotions we experienced due to the number of "unknown" that we had to record.
Posted by Suzassippi at 10:45 PM

Wonderful project! I'm sure the participants learned a lesson in life! As a child visiting my grandparents we always visited cemeteries where ancestors were buried. I learned my family's genealogy and also not to walk across the graves! I almost feel like I know relatives who died before I was born because of those visits. I always felt bad in one cemetery where older graves were marked with a large rock; I was told that the graves were so old no one knew who was buried there.

Thank you, Beth. I hope you will come back for future posts on the project. It is much more intensive and time-consuming than I could have imagined.