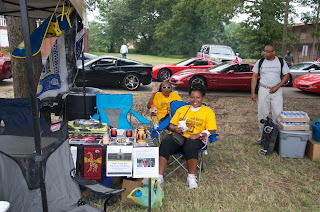 Debra, LaToya, and I headed over to Mound Bayou early this morning for the homecoming weekend September Fest.  We were there to support the City's Taborian Hospital Project, promote a historic preservation workshop for youth next month, and meet some people from the community as we plan for the service learning class in January.  It was a long, but fun, day and we enjoyed ourselves immensely!  We met a lot of people from the community, and people formerly from the community who were home for the festival. 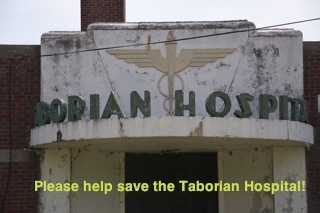 I made refrigerator magnets featuring the Taborian, and an archived photo of the Bank of Mound Bayou from the early 1900s and we handed them out to folks visiting our table.  We were set up next to the Mayor's booth (where they were smoking ribs and sausage) and it was mouth watering all day long.  I also had yummy catfish and Delta hot tamales!
A local pastor came over, and shared that he was born at the Taborian and that it was very important to him.  I told him about our plans for doing some interviews with people who were born there, or have some connection to the hospital, and he has agreed to be interviewed in our upcoming project! 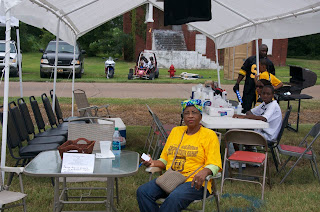 I bought some raffle tickets to support the Leading Ladies of the Delta, who do scholarships in the area. 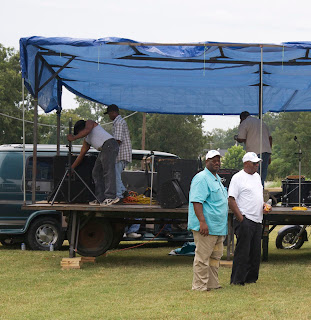 Mayor Kennedy Johnson, in the aqua shirt, was helping oversee setting up the stage for the music performances.  I also met one of the city aldermen, and one of the members of the board of the Taborian Hospital Project, along with the Mayor's family and many city employees--all of whom were so helpful and welcoming.  One young man loaded our chairs, table, and bags in his truck and took us back to my vehicle when we left at the end of the day. 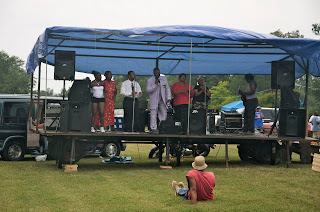 First up when the festival kicked off at 1 was this gospel group.  There were so many people and so much going on, that I did not hear who they were, but they gave a powerful and moving performance. 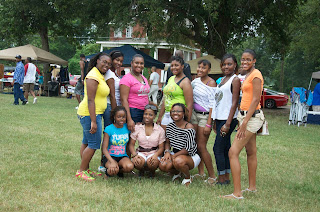 These are the cheerleaders for the Mound Bayou Hornets.  We talked to several of them, and they did a cheer for us.  I told Debra that cheerleading is a lot different now than from when I was in high school! 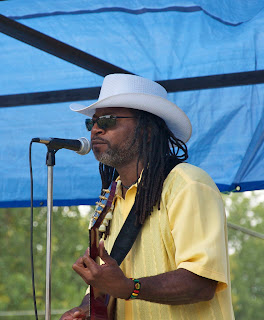 A little later in the afternoon, and the bands began to play.  Once again, I did not catch the name of this group, but they made you want to get up and dance. 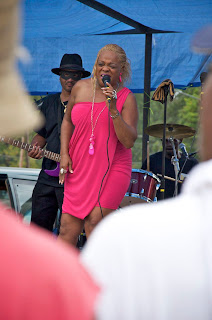 Nellie "Tiger" Travis is from Mound Bayou, and currently sings in the Chicago area.  She put on a really good show and the crowd loved her.  Nothing like a hometown girl making it to bring out the fans, huh?  She said she was in a club last night and heard one of her songs being performed and thought that was great. 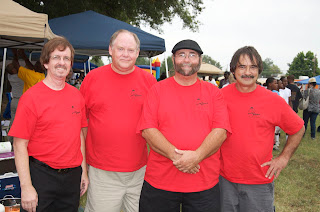 The James Pirkle Blues Band, all the way from Tupelo arrived around 4.  I was introduced to the band back in early summer here, and really enjoyed their music.  The mayor had earlier told me they used local bands for the festival, and I asked if they might be interested in this band, and sent him the link to my earlier post of their music.  This great group of guys played it as a benefit and the Mayor fed them ribs to thank them.  I wanted to get a new video of them (especially in their spiffy new shirts), but it had been a really long day for us, and we had to pack up and get home and the band was not going on until later.  The person who was documenting the festival officially interviewed them on camera, and I must say that everyone we met, whether officials with the City or just town-folk, were wonderfully welcoming and friendly.

Posted by Suzassippi at 9:21 PM

You would have loved it. I also had to share "pronoid" with LaToya--she found it hilarious.

Funny, I had a pronoid moment today. Rich is working and we talked on the phone earlier. He said he might run home and pick up a few things he needed, asking if I was going anywhere any time soon. I said no, thinking that he just wanted me to be here when he came by so he could see me. haha :) Later, I started thinking, "oh, maybe he wanted me to BRING him that stuff instead of having to come get it." I was going to the store so gathered everything up and was heading to the car when he drove up to get it. And yes, he was kinda wondering if I might be coming by so I could bring it. LOL

That did give me a laugh!