River Road runs along both sides of the Mississippi River from New Orleans to Baton Rouge. It is the old plantation route that followed the Mississippi. Due to the location, many freed slaves settled in the area and set up small towns along the river.

Cancer Alley is the name given to the petrochemical corridor that runs along the Mississippi from New Orleans to Baton Rouge. Cancer Alley's formal name is River Road, and it runs on both sides of the river, with a variety of bridges allowing crossing between the sides. The petrochemical corridor is home to a variety of refineries due to its proximity to the river and the port of New Orleans; both provide transport out of the area.

I first became aware of Cancer Alley a few years ago when I ran across an article about grassroots organizing groups in New Orleans who were partnering to address the concerns about the toxic environment. Residents claim--backed by a number of studies--that the cancer rate, including rare cancers, miscarriage rate, babies born with deformities, and incidence of respiratory and other ailments is higher than the national average, due to the spewing of toxic fumes and other chemicals into the air, water, and ground along the corridor. The area is home to mostly minority groups, predominantly, African Americans who are poor.

I decided to take a tour down the corridor and see for myself. After crossing the Mississippi on the Huey P. Long bridge, I exited at Bridge City, a small community that appeared to consist of a bar, a grocery store, some houses, and what looked like a boatyard--the kind where they work on huge commercial ships, not your neighborhood marina boatyard. 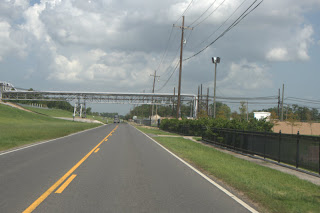 The highway is a narrow 2 lane, with no places to stop and speed limit is 35 up to a max of 45 in some stretches. Pipelines run across the road at regular junctions, connecting to storage on the river bank.

Due to the inability of stopping--and a certain amount of post 9/11 concern about photographing a petrochemical plant, all of the pictures were shot from my moving vehicle with a "best guess" aim. The refineries read like a Wall Street dossier: Dow, Monsanto, OxyChem, IPCAgrira, the Three Rivers Nuclear plant operated by Entery, etc. 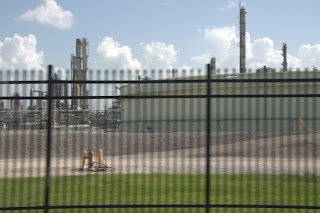 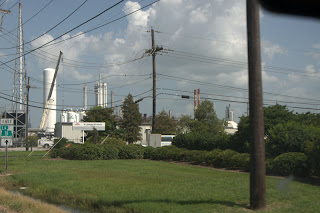 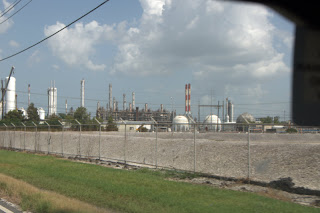 One after another, they occupy the area where people live, and animals live, children go to school, and cars pass by. I noted at passing OxyChem that my eyes began to burn and sting, there was a foul smell in the air even with my recirculation on the air conditioner rather than on fresh air. 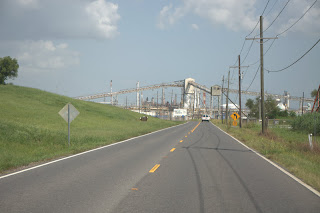 A little further down, and I noted a site for the nuclear plant. I was taken aback at the site of it located right next to the Mississippi River, which empties into the Gulf, and in the midst of a community of homes. 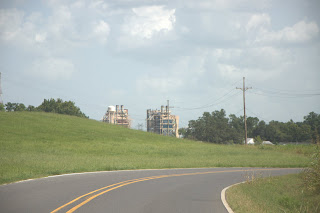 I confess to a cold chill involuntarily running through my body, and a sudden increase in heartbeat and feeling of anxiety. Evacuation routes and emergency information "in the event of the siren blaring" advise where to go to information. 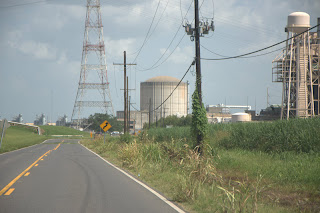 One of the many Mississippi River crossings along the way loomed overhead, filled with trucks. 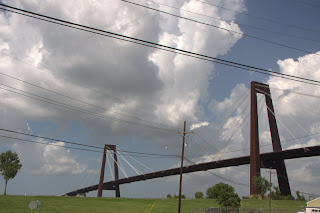 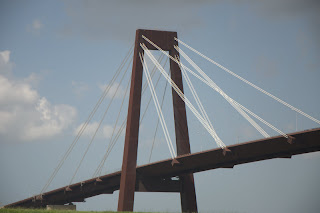 Dotted in between the petrochemical refineries were small towns and historic sites. All of these are located on the road, right next to the river levee. 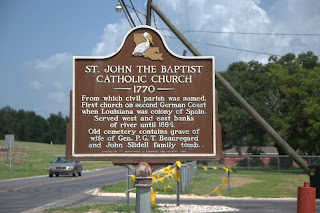 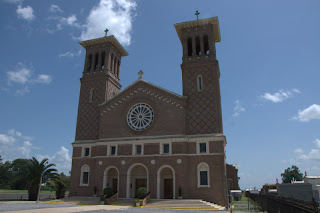 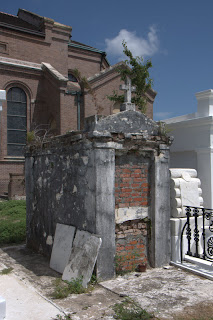 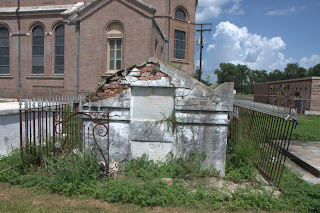 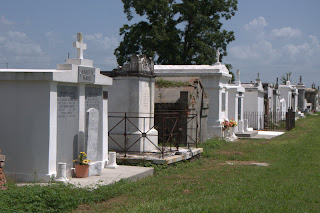 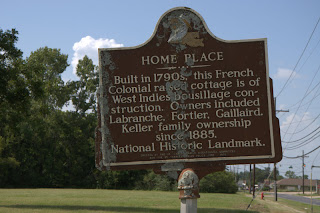 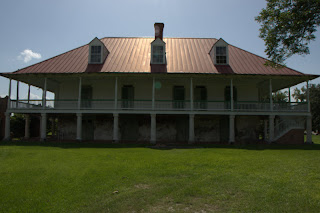 Miles and miles of sugar cane grow along the road, some immediately next door to a chemical refinery. I could not help but wonder if people are affected by the toxins released into the air, how much affect it had on the cane fields that produce sugar and syrup that humans then consume. 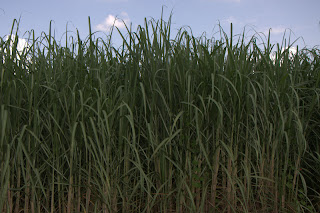 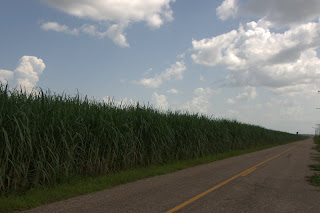 Evergreen plantation, an historical plantation open only for tours. There are still many working plantations along the route. 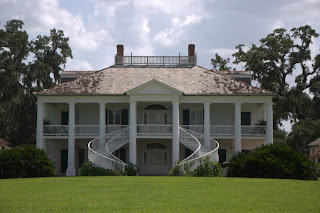 After a little over an hour of driving, I was still noting the same experience: refinery and chemical plant after another, interspersed among the tiny communities. Although I saw an occasional white person, the majority of the people I noted were African American. Proponents of the refineries argue they bring jobs and economic resources to the communities. The organized opposition--members of the communities--say they have benefited little from employment as they lack the education and skills to acquire the jobs. Many in the area have less than a high school education.

As with all controversy over big business and community interest, there are differing opinions. Some studies (some are financed by the chemical companies) indicate no risk of toxins. It has been noted from other sources here, however, that individuals getting their drinking water from the Mississippi have a much higher incidence of stomach cancer than those who do not consume it. Experts indicate that many of the studies on health risk are flawed and do not consider the data in a manner that allows them to detect the significant increase in cancer and other illnesses that are claimed. Local governments have also claimed that is is "outsiders" who are stirring up fears. (Apparently, throughout history, governments and big business have believed that a community never gets fed up all by itself, and that there is a cadre of trouble making outsiders roaming around looking to invent a problem where one does not exist.)

The community of Convent, Louisiana was able to create enough opposition to the location of the Shintech refinery proposed to be located there, that Shintech finally gave up the plan and moved to nearby Plaqueville. Residents were able to save their community, but the misery alleged to follow the chemical company merely relocated to a different area according to some reports. The support for location of Shintech in Convent was the lure of jobs. The community refuted that, citing statistics at how few benefits go to locals in the history of Cancer Alley, and noting that most of their community lack even a high school education. Local government blamed the agitation on "outsiders" again. 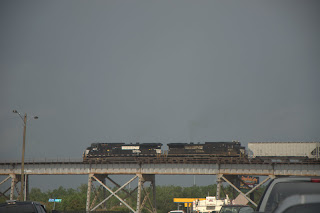 After over an hour, I was exhausted, feeling overwhelmed at the experience, imagining raising my children in such a toxic atmosphere which stank of fumes in many places. I wondered at the people who felt anxiety in the event of a chemical leak. In addition to the pipelines and river traffic, trains pass next to the road, loaded with cars filled with chemicals. Given that so many poor people in our country have no access to health care, I imagined their concerns about the health outcomes in their communities due to these increased risks.

As I headed back to New Orleans and waited in line to cross the Huey P. Long, a huge towering structure, I watched a train slowly labor up the bridge, the track running between the lanes of inbound and outbound traffic. The train bridge is higher than the traffic lanes, so a train accident would yield significant danger to the vehicles below. The train was leaving one of the petrochemical refineries, filled with who knows what chemicals. It began a pouring rain just as I entered the ramp to the bridge, and it was almost impossible to see even with the wipers on high. I missed my exit due to inability to see the sign.

As I sat on the deck later that night, my mind replaying all the events of the day, I found myself asking unanswerable questions, at least none we have answered so far. I wonder why we are so willing to poison our environment: our water, our air, our food, our land, in the name of money. There is sufficient evidence to indicate that rather than improving our lives, they have only made it worse. Common sense would tell us that putting cancer-causing chemicals in our food and water and air has to have negative outcomes at some point. Why are we so unwilling to invest in other alternatives if not for the fact that someone somewhere is making a hell of a lot of money using all these chemicals?

At least in the communities along Cancer Alley, there are some residents who are fighting back, with the support of those "damned outside agitators." Those outside agitators (we in community organizing prefer to call it solidarity and support for human rights) are necessary due to the hardship of ordinary people--usually poor and working class--to fight big business and big government.

For more information, you can simply google 'cancer alley New Orleans' and locate resources. In particular, www.seeingblack.com is interesting.

On a final note, as I sit in front of the window writing this, a black sedan pulled up in front of the house, and men in suits wearing sunglasses parked at the curb and watched me for a few minutes. Now if that doesn't raise your paranoia level, I don't know what would. Probably just birthday greetings from my government. LOL
Posted by Suzassippi at 8:36 PM

Pretty scary stuff. Environmental racism has taken a huge toll in many poor communities as we well know. I read in one of Jonathan Kozol's books about the incinerators put into the poorest neighborhoods in New York City where now most of the kids have terrible asthma and lung problems because of constantly breathing in the fumes. We certainly don't want to take care of people's health when there's money to be made. You'd better be careful--you probably have an FBI file by now. LOL