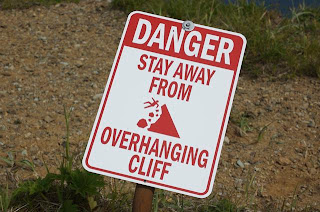 I have determined after having dinner and a wonderful visit last night with my sister and brother-in-law that the problem in our family is inadequate danger warning signs.  Any interaction is like a big ole invitation to falling off a cliff.
I did not get to see my sister at Christmas due to falling off a cliff and having to be air-lifted (okay, Avalanche-lifted) back to Mississippi a couple of days earlier than planned.  When she called Saturday and said they would be in Tunica (a little over an hour from here) for a couple of days on their way home, we made plans to drive over and eat dinner with them.
Over a wonderful buffet at one of the many in the casinos, we caught up on their family, mine, mom and dad's degenerating health, cousins, grandchildren (hers, not mine) and laughed a lot.  Talk turned to the falling off the cliff episode at Christmas.  On one hand, I felt some sense of relief that their reality was similar to mine.  On the other, it was still a sad and unnecessary breach in the family ties that may well never be able to be mended.  The thing about falling off a cliff is usually that it is a long way to the bottom and you are bruised and bleeding when you land, making it rather arduous to attempt to climb back up to the top.
My sister and I have talked more than one time about the genetic disposition in our family.  One side of the family was pretty calm most of the time, valued higher education, deeply committed to family above all else--or at least all else that was evident--and very protective of each other.
The other side was pretty volatile much of the time, and family rifts were common--with folks going for months if not years estranged over something.  That's not to say there were not reasons for those issues, as the more I learned of that side of the family history, the more I understood the wounds those family members carried.
Now if you mix those two elements in a family, naturally, you are going to get the make-up of both sides.  Kind of like having blue eyes and brown eyes, the mix is going to throw down differently in each member.  I would say my sister got mostly genetic material from the side of the family who is calm and committed to family; while she has been known to have her episodes of falling off the cliff, they are pretty rare.
I think I am kind of in the middle--I have many of the traits of the calm side of the family, but far too many cliff hangers for my liking.  I have worked on that most of my adult life since starting graduate school and beginning to understand it for the first time in my life.  The thing that became clear to me as my sister and I were talking last night is the inadequate danger signs.
In the old TV show "Family Ties" the family had a warning system.  When things were about to get out of hand, Mom Elyse would say something to the effect of 'things are getting out of hand, here' and would generate something to de-escalate.  The message was clear about the boundaries in the family.
In my family, Mom may try to de-escalate, but the adrenaline rush of falling off the cliff (or more common, pushing someone off the cliff) appears to just override all else.  Much of the time, there is no warning sign that you are approaching the edge of the cliff, and need to back off.  A comment is made, and someone erupts seemingly out of the blue, with a volatile outburst that takes everyone by surprise, and alas, someone ends up at the bottom of the cliff asking 'what the hell just happened here?'
Maybe we need to start equipping families with those new electronic devices on cars where it warns you: someone is too close, slow down; you are about to back into an object, stop; vehicle approaching your blind spot, use caution.  We put them on cars because people tend to just drive and not think about their driving.  That is probably the same reason families should have them.
Posted by Suzassippi at 9:06 AM

No wonder we have so many issues in the world when it is so difficult to navigate even our most intimate familial relationships. We have trouble understanding our parents and brothers and sisters and children, so imagine how much more complicated it gets as we move out further and further into the extended family, the neighborhood, the community, the country, the world! It's amazing that we find common ground at all sometimes! I wish we were all equipped with that "beep, beep, beep" sound to keep us from going over the cliff.