Bearsville, on the way to Newcastle from Graham.  Bear Young--several years ahead of me in school purchased this area and seems to have a penchant for old items.  I am not sure what else he does here.  I do recall his driving a tractor to high school once from their ranch outside of town. 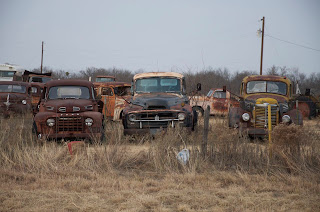 I can--of course--remember when we got gas at little spots like this, from pumps like this.  Even worse, I can remember going to get gas at Manual's Fina station in Elbert, Texas, where my mother's parents lived, and he still had those "old-fashioned" gas pumps with the glass tops that worked on gravity.  Not the "modern" pumps like these. 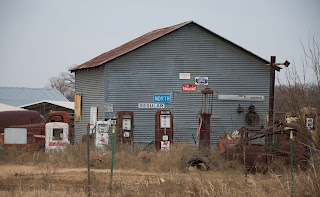 We lived outside of Newcastle (on the other side) when I was a small child.  There was an old combine like this one (used for harvesting wheat) on the property in front of our house.  Though it was "off-limits" to us, we often sneaked over there to play.  I was 3, my sister 5, and my brother 2.  One time, my sister got down in the section where the chaff blew out, and I just knew I would never see her again.  That same time, my brother fell off the top part and cut his head on the metal band that was made to hold a water can.  (Also made of metal in those days.)  He had to go get stitches and still has a scar on his scalp.  I am pretty sure we got a spanking for that, after my brother got his head stitched up, that is. 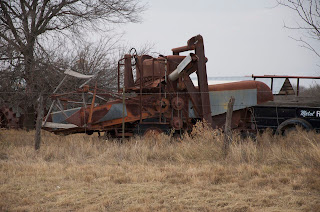 A little further up the road (down the road?  out the road?) and I am in Newcastle.  My dad went to high school here, and I went to first grade here when they moved back from out on the Plains after my brother was born.

Newcastle was named after Newcastle, Pennsylvania when they discovered coal here.  My dad's family were from England and John Wooldridge came to Virginia from England as an indentured servant (blacksmith trade), and eventually owned coal mines per the recorded family history.  From there, family migrated to Arkansas where my grandpa was born (there is still a Wooldridge, Arkansas in existence) and his parents moved to Proffitt, Texas (just out of Newcastle) when Grandpa was a child of 8 in 1908. 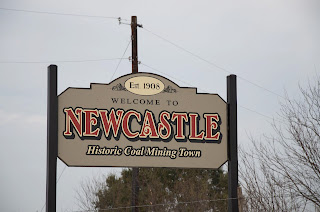 This was the house we lived in once we moved into town for my sister to start first grade.  It was a block from school.  They raise goats in the front yard there now, and as far as I can tell, the house has not been inhabited in a while. 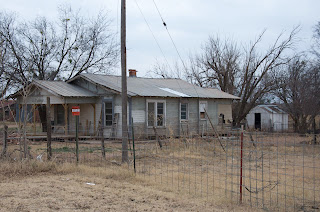 Our neighbor across the street was Norene Johnson.  Once my brother and I went over there and told her Mom needed to borrow a cup of sugar, a cup of flour, and 2 eggs.  We were making mud pies.  I don't recall, but I suspect we got a spanking for that one, too, when Norene asked mom how the cake turned out.  It, too, has been vacant for years. 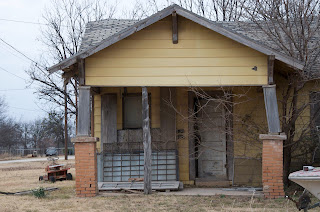 Up the street from my old house, Shetland ponies munch on some hay.  Wonder what happens when the top finally falls down? 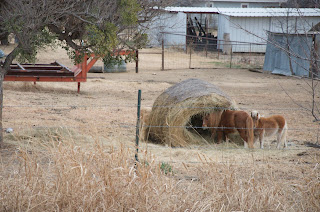 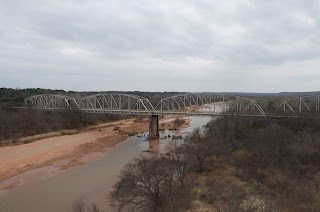 Old Newcastle bridge over the Brazos River.  My dad used to take us "swimming" here when we were kids, but it was really like wading as the river was not deep unless there had just been a rain.  There was quicksand, and he was always careful to make us stay right near the edge, though I recall he would float out and show us the "dead man's float." 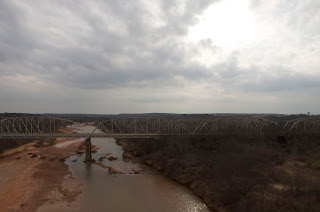 The Proffitt Cemetery, where I spent much time with my grandma, taking care of family graves.  Once, after my grandpa died and I took my son there (he was about 4) he asked me if this lamb meant a little lamb was buried there.  I had an impromptu lesson on "the lamb of God" and noted I had been negligent in his religious education. :) 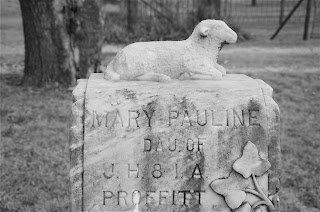 I was named for my great-grandmother, only my mother insisted on spelling it Carolynn. 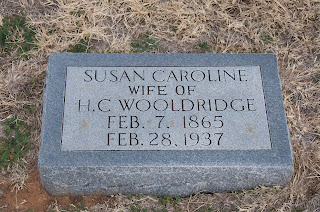 A common site in the area is "stock tanks" which were used to water cattle.  Basically, you just found a spot with a clay bottom and dug a hole, and waited for rain to fill it up.  Seeing ducks or geese on the tanks was common.  In winter, they would freeze and we would sneak down there and "skate" in our shoes. 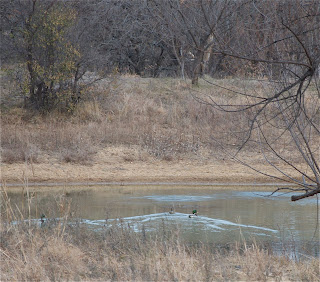 Whiskey Creek, behind Grandma's house, where my dad learned to swim.  At least, when it had more water in it than now. 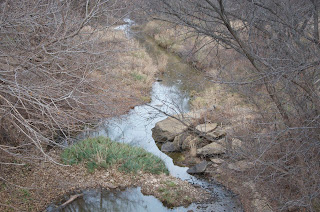 Grandma's house.  It has been a number of years since I actually went up to the house, since you have to undo the gate and no one has driven up in so long, the road is all overgrown.  I used to go out there fairly often, and get the rocks she had collected to build her flower beds.  She told me I could have them before she died, as she knew I was the only one who cared much about things like that.  I have the "best" ones with me here in Mississippi, along with some brackets that were in the house, and a few odds and ends I found.  I would have like to have had the mantel, but left it in honor of my grandparents and my father's wishes, and then some one stole it anyway.  I said if I had known that, I might as well have stolen it. 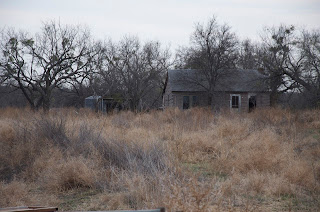 Cattle grazing next door.  This land once belonged to my great-grandpa. 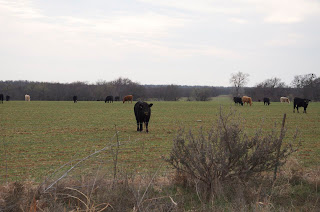 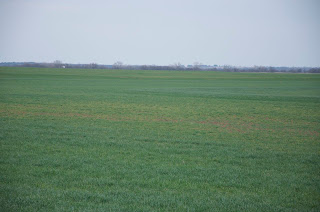 Proffitt Baptist Church.  My dad's family were Methodists, but sometimes as a child, I would go to Sunday School and Church here with Grandma when she did not want to drive to Newcastle.  The Methodist Church of Proffitt had long been discontinued by the time I was a child.  The building was still there for a while, and I do have a faint memory of some cousin or uncle or my dad's dying and our going to the funeral at the Proffitt Methodist Church. 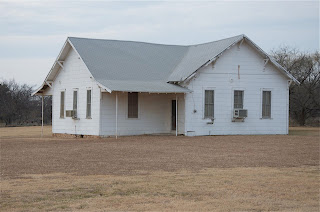 Cactus--extremely common across this part of west Texas.  In hard times, the ranchers burned the stickers off them so the cattle could eat the pads.  The pads are called nopales and used in southwest and Mexican cooking. 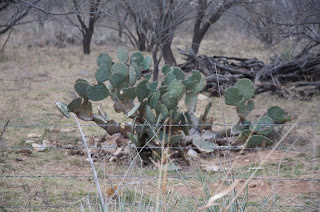 Longhorns, that apparently have been cross-bred with Herefords. 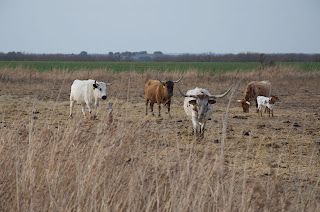 Proffitt school, where my dad went to school as a young boy.  It was just up the road from Grandma's and he would walk to school--barefooted in the warmer months. 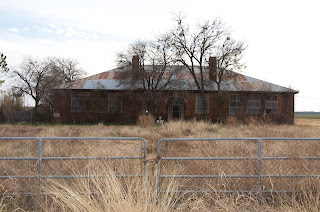 The cornerstone shows O.T. Wooldridge, one of my grandpa's kin. 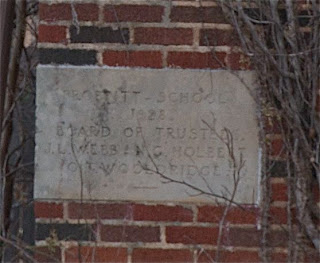 It had been a number of years since I made the community drive-through--at least 2003, which was when I moved to Mississippi.  Prior to that, I would often slip down there from Abilene to reminisce, stop at the cemetery and chat with Grandpa, or pick up a few rocks from Grandma's garden.  No matter how many times I go, or how long in between, it always feels like going home.

Posted by Suzassippi at 3:17 PM