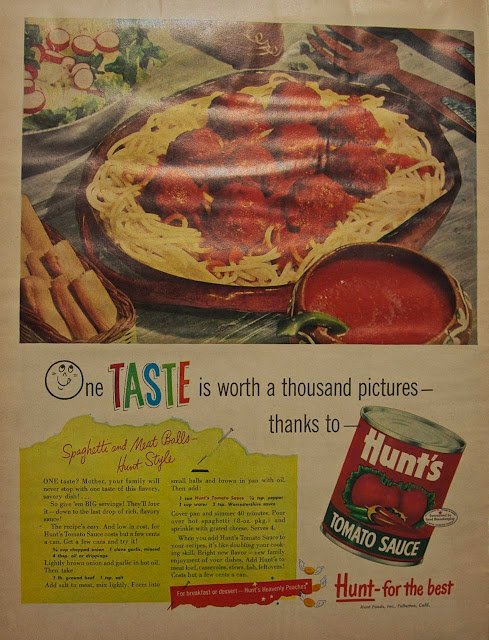 My mother was 88 yesterday.  Not long ago, in her box of recipes I found one for sphaghetti and meatballs, probably taken from an advertisement similar to this one.  It was simple, just tomato sauce and meatballs over sphaghetti.  The odd thing is that I never remember having spaghetti and meatballs growing up.  We were more the "goulash" kind of family, and a one-dish meal made with ground beef, macaroni, canned tomatoes, and potatoes was on our table fairly often.

On my recent trip home, it fell to me to clean out the 'junk drawer' because it would not close without catching on something and necessitating rigorous action to get the drawer open after sticking one's fingers in the open crack to try to rearrange the offending item.  I threw away piles of recipes cut from boxed food packages and the pages of a magazine or newspaper, many for the same recipe, but which had never been prepared.  The fact that they were in the junk drawer rather than the recipe box might have been only a part of the reason they had never graced the supper table.
Posted by Suzassippi at 8:34 AM