Stuck behind the bus of life 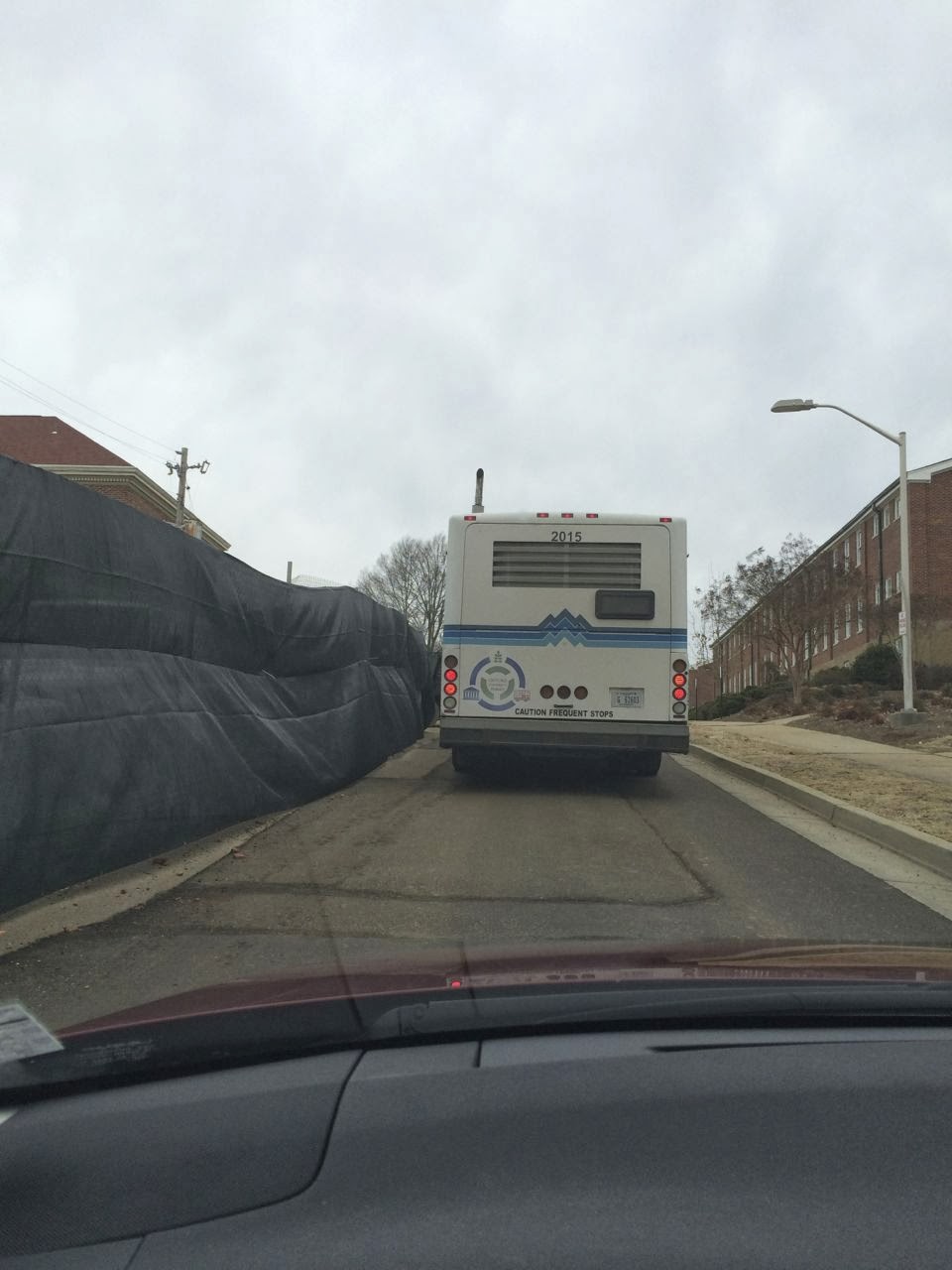 Ever noticed how there are times when life is just one big extreme to the other?  Last week as I was on my way to work, which is increasingly harder directly in relationship to the increase in construction, I was stuck for a good 20 minutes, on a hill, behind a bus, with traffic piling up behind me, and none of us had anywhere to go.  Now that is not bad in and of itself--not being able to get somewhere you need to go, and I really try to do the chill thing and just hang out--in this case, texting photos of the bus in front of me and chatting with my friend who was securely inside the building.

I also generally refrain from criticizing poor performance from workers--unless we are standing in their work boots, or in this case, sitting in the cab of his truck trying to back a trailer, we might not have adequate understanding of the situation.  Now, noted, I think if a road is going to be blocked for 20 minutes, one should do it at the end of the block so people have an option, rather than in the center of the block where there is none, but hey, they probably didn't know it was going to take that long to back a load of bricks into a parking lot with a 12 inch gate opening.

This guy clearly was not the truck backer that my Bro is.  Bless his heart, he backed, pulled forward, backed, pulled forward, [insert as many times as you want, he will still be trying to back that trailer].  He jackknifed the trailer, which understandably took him a while to undo.  Now, it did not take me long to just turn off my car, set the brake, and enjoy the diesel fumes from the bus at the top of the hill--and yeah, we are doing all of this on a hill, which is why I set my brake.

You know how testy some folks can get when in a situation with no control.  Rather than "pulling leather" they want to stomp on the horse...and any other horses nearby who are not actually out of control.  I confess to a moment of wondering just how much trouble I would get in for pulling onto the wide sidewalk that runs up to the opposite road, my little car would fit on it, but it was not even a serious thought.  Of course, meanwhile, back down the hill behind me, vehicles were actually pulling out of line, turning around and driving back down a one-way street that is already blocked with construction, construction debris, temporary buildings, and a number of construction vehicles.

Finally, the poor guy was able to maneuver enough to get most of his truck out of the way of the bus, but only after some of his co-workers removed a couple of sections of the fence--probably not a good morning for him either, what with the undoubted humiliation and ragging by his co-workers.  The bus eased on by and cleared the top of the hill.

I, meanwhile, who have been sitting in the car had stiffened up (you know, the knee, hip thing going on these days) and could not get my knee bent to release the brake.  It had taken exactly a half nano second for the bus to start to move and me to start to find my brake, but yes, let the honking begin!  Now we are talking less than a second here, we are talking immediately, so it did not do a lot to improve my mood--right folks, I want to continue sitting here longer, so I am just eating my lunch and having a cup of coffee.

In another 2 seconds, I released the brake and started the car.  The Lexus has a slap shifter (and yes, I wanted to slap something besides my shifter at that moment) and as I would put it into forward, the car would start to move backward--not from being on the hill and rolling but because apparently on the hill, it wouldn't let the transmission shift into forward...and the honking is continuing.  I thought I had opened the sunroof and put my arm up to do a "stop" motion because all the honking was frustrating me, and instead, slammed my hand into the glass--I had only opened it partway.

Take a deep breath.  Honking at me does not influence me to move any faster when the problem is that I cannot move at all.  However, it did influence me (yes, picture me with a tiny little smile here) when I finally got the car to move forward, to do so at a snail's pace...up to the top of the hill....and down to the end of the block to the closest handicapped parking space for my building...and slowly pull into said space.  The resulting wind from the vehicles rushing past me (uhm, excuse me folks, but there is currently a 15 mph speedlimit around construction sites) wafted my scarf out behind me, no doubt creating a striking image as I leaned on my cane and bid them all a good rest of the day.

Okay, I was not really as calm as all that, because frankly, I was angry.  Not at the truck driver who could not back his truck and created the jam in the first place, but at people's impatience at something that could not be helped by impatience and rudeness.  It is as irrational to honk at me when I cannot move my car as it was to be angry with the truck driver because he could not back his truck--although to be honest here, if you drive a truck for a living, you should probably be required to know how to back it up including in difficult spaces.  None the less, the whole thing was a reminder of how impatient people are these days in a time of expected instant gratification.  And, I know my little pique did not teach one person behind me that there are consequences to one's choices, it just temporarily gave me a feeling of control of something.

Meanwhile, halfway down the difficult trudge downhill, the poor truck driver has finally been able to back the trailer into the lot enough and suddenly, someone yells "stop! stop!" followed by the sound of a boom as metal hit metal.  Yep, he had "done gone and backed too far" and hit a storage pod.  I reached the bottom of the hill and one of the young workers (the one who always has to crawl into the sewer space when they need that done) was working in his customary sewer space.  He looked up at me, smiled and said, "Good morning, how are you?"  I smiled back, genuinely, and said, "I'm good, how are you?"  He grinned the width of his face and said, "I am great--it's Friday!"  What a lesson, folks. 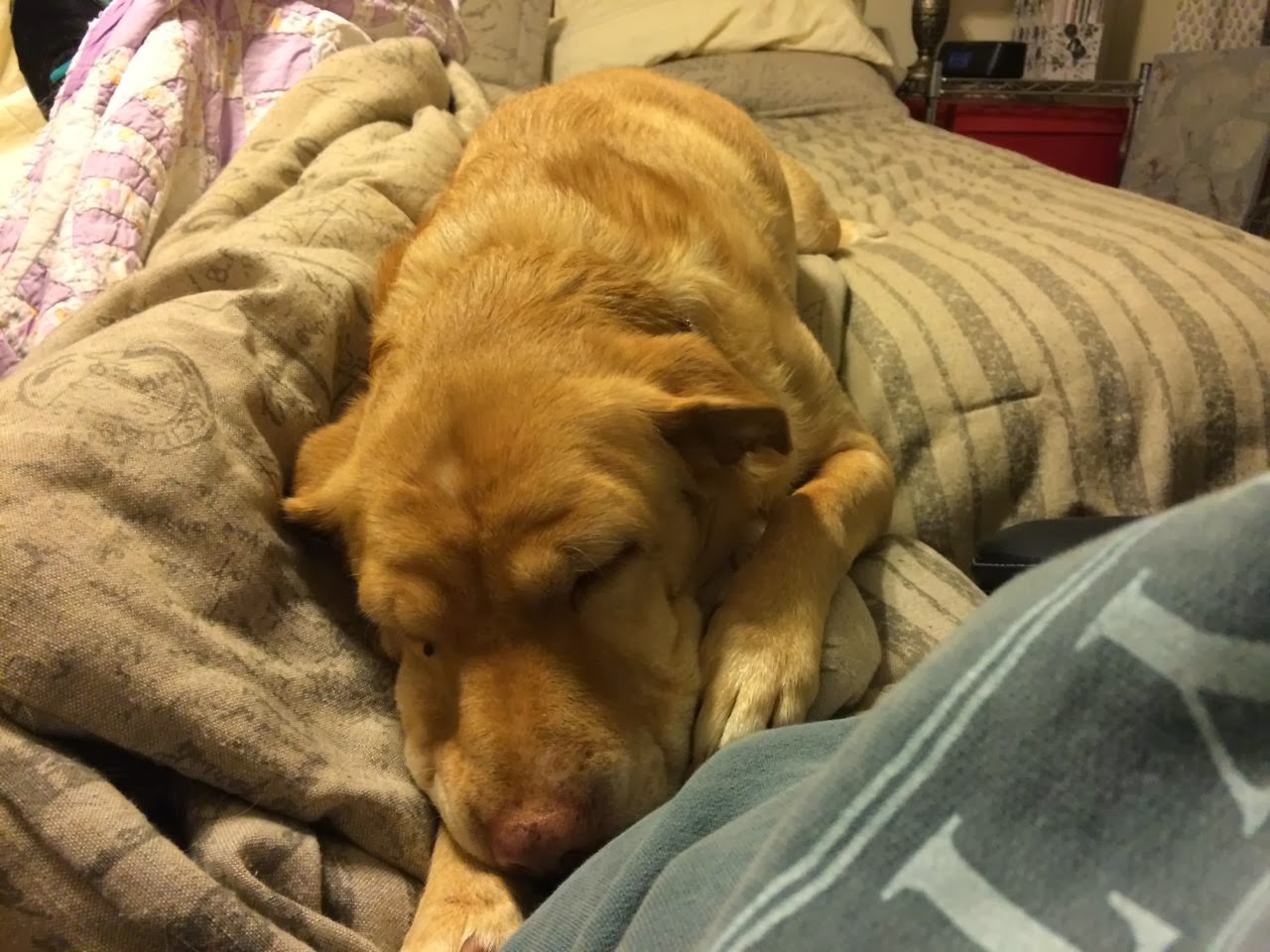 I needed a good laugh, and the little lesson didn't hurt me either. It seems that construction is just away of life.

Reminds me of the 4 years I commuted Abilene to Arlington for my MSW and the 8 for PhD--never once in the entire 12 years was there not construction on major portions of I-20! You may be right.