Smart Reefers and Other New Skills I Acquired Today 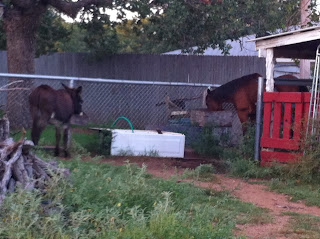 I have acquired a new skill set today!  And, of course, "refreshed" ones I had already mastered eons ago.  Rio was at the gate this morning when I went out, and Jenny in her spot right behind him.  After I filled their water trough, I checked the hay as the grass is starting to thin.  They still had a full hay container, as they are not yet ready for hay with the grass still green and available. 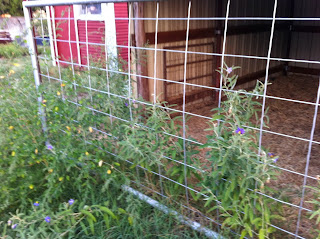 The pasture is filled with Mexican sage in bloom, and looks so pretty.  One year in Abilene I bought a bunch of it in the plant nursery, then came home and found our pasture full of it.  Yep, they actually sell a weed in the store and I was silly enough to buy it.
Sometime since my last trip here, Sis found this watercolor drawing of Dad that one of our cousin's did years ago after a visit.  He must have been in his late 40s, or maybe early 50s as his hair (and his glasses) were both black. 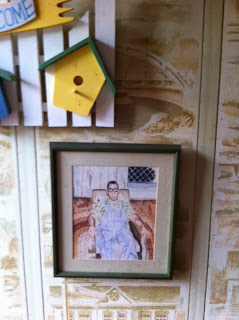 After I finished feeding and watering, I had to go pick up feed before the feed store closed.  Yes, you can get 4 bags of feed in the hatch of my Lexus.  The really fun part was getting them back out again.  I really had to question why someone invented the wheelbarrow--with only one front wheel that wobbles when it is loaded with horse feed.  I took one sack over, and was able to maneuver it up on the stand we keep the feed on.  Then I tried taking two bags over--was not a good idea, but I managed.  I left them in the wheelbarrow for my brother.  I was able to get the last bag out and walk it over to the chair just inside the barn and get it up off the floor.  I need about 6 weeks of this kind of work to get back in shape for this kind of work. 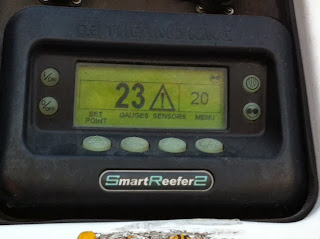 I stopped by to check on his trailer gauges for him this morning on the way to get feed.  This is my newly acquired skill--I watched him check it last night when I picked him up after he got here and parked.  My folks' church is across the road from us, and they let him park his truck there when he stops in for a visit while enroute somewhere.  His company routed him through here on his way to his next unload, allowing him a 2-day layover since his load is not due until Monday morning.  He is a conscientious, careful, and experienced driver, and these days, that apparently goes a long way. 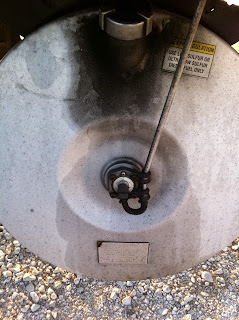 I was a little panicky when I stopped to check and did not hear the diesel running like it was last night.  I sent the photo of the reefer gauge and told him I did not hear the motor.  He asked me to check the small tank next to the landing gear and see what it read.  Hmmm...landing gear...well, on a plane, that is the wheels down...then I spotted the gears that you use to stabilize the trailer when you drop a load.  Is this it?  The gauge was barely off full, and at that moment, the diesel kicked on.  It seems that a smart reefer, like most of trucks these days, is computerized to do what it needs to do while conserving fuel, and for that matter, pollution and noise.  Everything is electronic!  Well, not everything--he still shifts gears, and most important of all when driving a huge semi-tractor trailer that is heavy, and big, he also thinks.  I have deep respect for his knowledge and skills, and watching him handle his truck, back the tractor into a trailer and hook the connection perfectly every single time, and drive all over the US with out causing an accident, and in fact, twice, his smart-thinking and skill preventing an accident when another driver was at fault has earned him a well-deserved reputation and safety awards .  One year in Dallas, a truck lost control on the freeway when the brakes failed, and it rammed into my brother's truck.  Bro was able to maneuver his truck and the other truck across two lanes of traffic without involving any other vehicles.  The patrolman working the accident said he had no idea how Bro had been able to do that.

I know there are many truckers who are not safe, and pose a danger.  I learned a long time ago to keep a critical eye out around them, and be prepared to yield.  Right or wrong, a truck traveling at highway speed has far less control of the vehicle than I do, and I do my best to recognize the extra distance they require, to avoid their blind spots, and to yield even if one is about to do something stupid, like change lanes right in front of me.  I have no intention of playing chicken with those guys or women when winning would be losing.  In return, it is rare for me to encounter a driver who does not recognize and respect that I do that, and acknowledge me for it.  It is kind of like one of my little cosmic karma validations.

The rest of the day was filled with funny moments, a lot of physical work, a smidgen of rest, and doing our best to take care of the parents who taught us to be who we are, and to take care of each other taking care of them.  I may not be as smart as a smart reefer, and I may not be tough enough to unload 4 bags of feed and stack them without help, but by golly, when we were all sitting in Dad's room and he was smiling and happy and laughing with his three children and their mother, it made it all worthwhile.  We know we have a long road in front of us, with no certainty--as indeed, there is in much of life.  But when you travel uncharted territory, it's good to do it with folks who have your back.
Posted by Suzassippi at 11:38 PM