Trying to get back to normal...whatever that is

Ever since I got home from Texas, things seem to be simultaneously moving at warp speed and running slow as cold molasses in a January ice storm.  I seem to be in a place of both currentness, and stuck in the past, both looking forward and thankful for the blessings and learning of the last few weeks, and not able to move back into my normal routine. 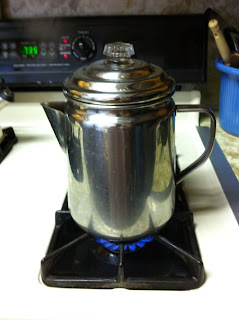 The first morning I was home, I did not have time to mess with coffee, as we had to be at the hospital more than an hour away before 8 AM.  However, Friday morning, I put the coffee on as soon as I got back in from feeding the horse and mule, and turned on the oven to make breakfast...and warm up the kitchen.  Now let's be honest here--when is the last time you made coffee in a percolator that works on the range top?  Or, have you ever done so?  While I confess to having not done so in a long, long, long time (using either my Mr. Coffee or my Starbuck's Coffee Press), this is how my dad still makes coffee. 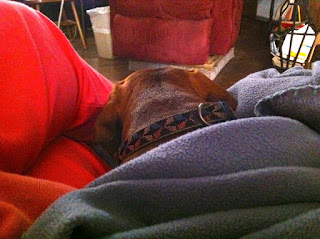 Tinka is usually curled up under her blanket next to Dad, and as she was missing him, she and I sat in his chair the morning following his surgery.  I sent it to my sis to show Dad, thinking it would cheer him a bit as he was having a pretty rough day. 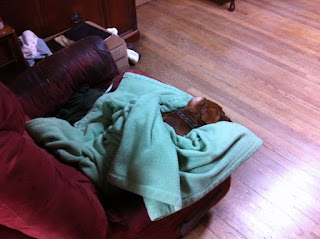 Tink stayed in his chair under her blanket even when I was not able to sit with her.  She always goes to feed with Dad, and every time I took her out to potty, she would immediately head to the shop and wait at the door.  I would patiently explain that "not yet" as she thought Dad was in there.  When I shared that with dad when we talked on the phone the morning after his surgery, he said, "yes, she is pretty fond of the old gentleman." 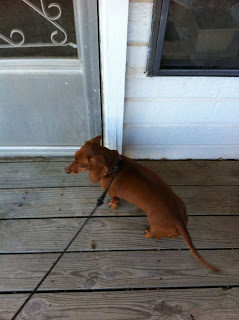 Although Tinka goes out in the yard with Dad all the time, I always put her on leash before we went out, afraid in the change of routine that she might not recall for me, and as I explained to Dad, I would just have to keep on walking down the road if something happened to her on my watch. 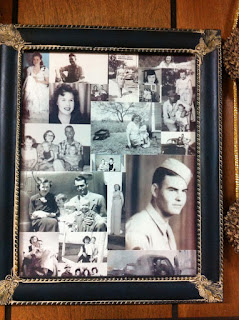 One evening, I was walking through the house looking at the family pictures.  I made this collage for my folks one year, using the photos of their courtship and early marriage years.  Dad was in the Army in WWII, and Mom was in college at Hardin-Simmons University in Abilene, where I would later come to teach.  They grew up in small towns only a few miles from each other, and my dad tells of being smitten with Mom the first time he ever saw her. 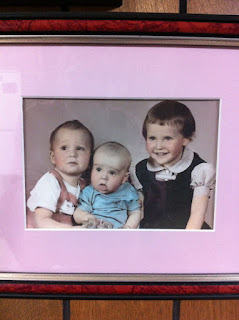 This is me on the left, my younger brother in the middle, and my older sister on the right.  Russ was under a year old, and since I was only 10 months ahead of him, I would have been less than 2, and Jane between 3 and 4.  There is a family photo of Mom, Dad, me, and Jane, and Dad is holding Mom around the waist.  She looks unhappy--and she was.  She said she had just found out she was pregnant with my brother, and I was only six weeks old, she was worried about how they would make it, and his holding her around the waist made her look "fat" to her.  While I can understand she would not have been thrilled to be expecting with a new baby and a toddler, they did make it.  While we were poor, I never realized that as a child.  We were fortunate to always have a warm and safe place to live, food, clothing, and to be able to go to the doctor when we were sick.  While we were not poor in my adolescent years, it was a sacrifice for my parents to send the three of us to college.  However, it was never a question, but a definitive assertion: you will go to college, and we will send you. 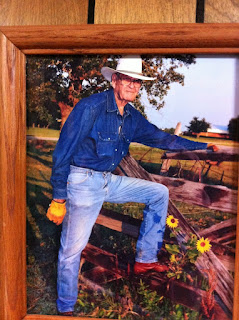 A couple of years ago, my niece took this photo of Dad out in the pasture one spring day.  It is one of my favorites, and I have a copy of it on my wall as well. 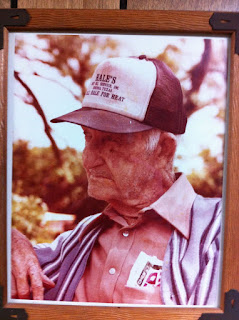 It hangs on the wall next to the one I took of Grandpa many years ago, when he was about the same age as Dad is now.  We were all out in the back yard at their house, and I was walking around taking pictures.  I just happened to take this one while he was not looking.  Randy had his dark room set up at the time (days of film and negatives) and had developed the roll and made the enlargement.  I recall my uncle saying, "I don't care what it costs, I want a copy of this."  True, in our impoverished state at the time, developing chemicals and paper were pretty pricey for us with our own newborn and Rand without a job, but nonetheless, we made him a copy at no charge.  After all, this is family. :) 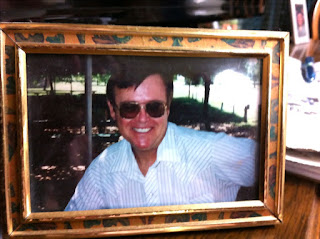 And then, one night as I sat in a chair next to the TV, I picked up the photo of my brother.  He was a young father in this picture, with a baby daughter who was about 3 at the time, and she was in casts on both of her legs from hip to toe.  We were at a family reunion, in the grape arbor of the historic Fort Belknap.  As I looked at the photograph, I was so thankful for his help those past few days during and following Dad's surgery, and was just reminded of how important family is to me, and to my family as a whole.  I don't recall the circumstances, but I do remember when I was in college and home for something, and my Dad saying to me, "your family will stick by you when no one else will."

Now it has been my experience over the years that I have some friends who will stick by me, too, but, yes, when the chips are down, my family is always there.  And, I hope they think that of me as well.
Posted by Suzassippi at 12:39 PM

What a touching post, thank you for sharing. You put life into perspective very clearly.

Thank you, Beth. It was truly a wonderful experience those two weeks, in spite of all the difficulties.

Love the family photos and memories. Glad you got to spend some time at home and reflect on life and loved ones. xoxo

Thanks, one of those friends I can count on like family. :)